UN appeals judges in the Netherlands sentence former Bosnian Serb political leader Radovan Karadzic to life in prison for genocide, ending one of the most momentous trials over massacres and other atrocities committed during the Balkan wars of the 1990s.

Radovan Karadzic had originally been given prison term of 40 years, but latest ruling considered final

UN appeals judges in the Netherlands sentenced former Bosnian Serb political leader Radovan Karadzic Wednesday to life in prison for genocide, ending one of the most momentous trials over massacres and other atrocities committed during the Balkan wars of the 1990s.

The judges upheld Karadzic's conviction for genocide over the Srebrenica massacre in 1995 during the Bosnian War but said the 40-year sentence ordered by trial judges was too light given the "sheer scale and systematic cruelty" of the crimes in question.

In March 2016, the International Criminal Tribunal for the Former Yugoslavia (ICTY) convicted Karadzic of crimes committed during the break-up of Yugoslavia in the 1990s. Among the offences was the killing of 8,000 Muslim men and boys at Srebrenica.

Dozens of survivors as well as relatives of the victims gathered in both the Hague and in the Bosnian capital Sarajevo to hear the verdict.

Survivors broke into applause after Presiding Judge Vagn Joensen read the new sentence. Karadzic, who had argued that the United Nations court was biased against him, stood impassively.

He has a moral responsibility but he feels he does not have an individual criminal responsibility for any of those crimes for which he's been convicted today.- Peter Robinson, Karadzic lawyer

"Karadzic failed to bring into dispute the first-instance verdict's conclusions about his intent to commit genocide," Joensen said, reading out the panel's decision.

Karadzic, 73, is the highest-ranking person convicted for the crimes during the bloody conflict in multi-ethnic Bosnia, during which Serb, Croat and Muslim Bosnian fighters fought to carve out ethnically pure regions by purging other ethnicities.

The ruling is final and cannot be challenged on appeal. Karadzic's lawyer, however, said he would continue to consider ways to look for a judicial review or commutation of sentence.

"Karadzic says that if the choice to have an independent [Serb republic in Bosnia] meant that he had to lose his freedom, he's prepared to make that choice and lose his freedom," Peter Robinson told reporters outside the courtroom.

"He has a lot of regret about what happened during the war and feels very badly for the all of the suffering today ... He has a moral responsibility but he feels he does not have an individual criminal responsibility for any of those crimes for which he's been convicted today."

The ruling will have huge resonance in the former Yugoslavia, especially in Bosnia, where ethnic communities remain divided and Karadzic is still seen as a hero by many Bosnian Serbs.

"I am partially satisfied, but a bitter taste remains that the Hague tribunal could not convict him on the second genocide charge, because of international pressure protecting the interests of Serbia," said Mirsad Duratovic, a former Bosnian Muslim prisoner in three Serb-run detention camps in the northwestern town of Prijedor during the war.

"I cried because I lost my children, I am all alone. I am very shaken. I lost three sons, my husband, my grandchild, my father died," said Mira Dogas of the Mothers of Srebrenica group, who travelled to the Netherlands for Wednesday's verdict.

"He's still alive while our children have been in the ground for a long time and they had a horrible death. He is alive, he has food and drink. He killed and destroyed our children. I will go home to an empty house tonight and look at the walls. I have nobody."

Munira Subasic, also from the Mothers of Srebrenica, had said earlier in the week that she would consider anything but a life sentence a "genocide of justice." 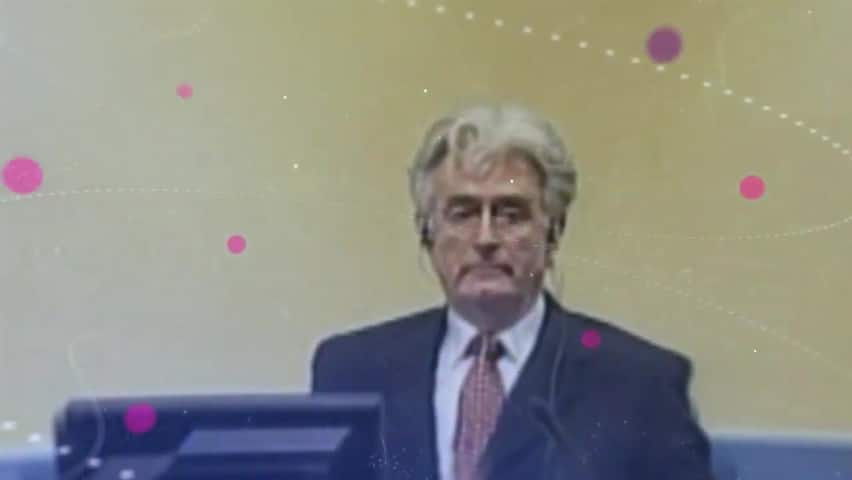 Adama Dieng, special adviser to the UN secretary general on the prevention of genocide, welcomed the verdict but said that such judgments can't replace "sustained commitment to reconciliation, trust-building and constructive and meaningful dialogue by political and social leaders and citizens" of the countries involved.

In hiding for over a decade after the war, Karadzic was arrested and handed over to the court in July 2008. He will remain in custody at the court's detention centre in The Hague until judges determine where he will serve out his sentence.

An appeal verdict is pending in the case of former Bosnian Serb military commander Ratko Mladic, who was convicted of war crimes and genocide in November 2017 and given life in prison.