U.S. President Donald Trump and Kanye West spoke with reporters as they sat across from each other at the Resolute desk. West dominated the conversation with a series of monologues that touched on social policy, mental health, endorsement deals and his support for the president.

Live from the Oval Office, it's Kanye West with a jaw-dropping performance.

The rapper didn't rap. But seated across from U.S. President Donald Trump at the Resolute Desk, the musician delivered a rambling, multipart monologue Thursday that touched on social issues, hydrogen planes, mental health, endorsement deals, politics and so much more.

Seizing the spotlight from the typically centre-stage president, West dropped the F-word, floated policy proposals, and went in for a hug.

"They tried to scare me to not wear this hat," West said of his red "Make America Great Again" cap. But, he said, "This hat, it gives me power in a way."

"You made a Superman cape for me," he told Trump.

Listen to West describe how his MAGA hat makes him feel: 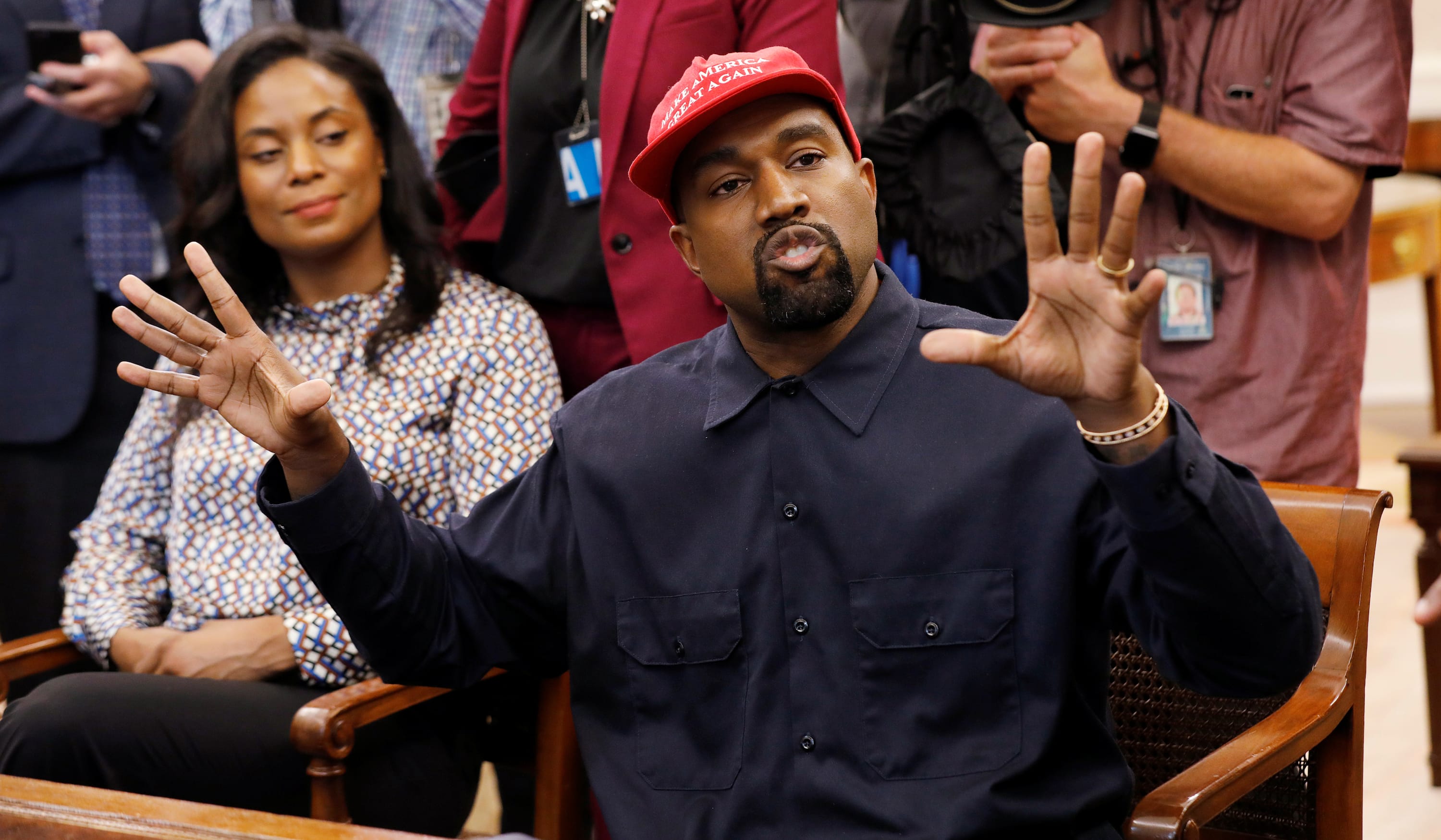 Kanye West on his MAGA hat

It was a surreal scene even by the standards of a nonconventional White House. The unlikely allies spoke to reporters before a closed-door lunch that had been billed as a forum to discuss policy issues including manufacturing, gangs, prison reform and violence in Chicago, where West grew up.

Spectators at the show included Trump's son-in-law and top adviser, Jared Kushner, former NFL star Jim Brown, the attorney for a gang leader serving time in federal prison, and a gaggle of reporters.

During one pause, Trump seemed to acknowledge the oddness of the moment, saying, "That was quite something."

West's mental health has been a question of speculation since he was hospitalized in 2016. In a bizarre performance last month on Saturday Night Live he delivered an unscripted pro-Trump message after the credits rolled.

Addressing the topic Thursday, West said he had at one point been diagnosed with bipolar disorder, but was later told by a neuropsychologist he'd been misdiagnosed.

"So he said that I actually wasn't bipolar; I had sleep deprivation, which could cause dementia 10 to 20 years from now, where I wouldn't even remember my son's name," he said.

The conversation began with an exchange on North Korea among Trump, Brown and West. Trump said the region was headed for war before he took over, and West commended him for stopping it. Brown said he liked North Korea; Trump agreed.

From there, West discussed prison reform and violence in inner-city Chicago. He brought up Larry Hoover, the leader of the Gangster Disciples, who is serving a life sentence for murder, claiming: "The reason why they imprisoned him is because he started doing positive for the community. He started showing that he actually had power, he wasn't just one of a monolithic voice, that he could wrap people around."

West said he "loved Hillary" Clinton, Trump's 2016 Democratic rival, because he loves everyone, but said he connected with Trump's "male energy." He also criticized the 13th Amendment, which abolished slavery, calling it a "trap door."

Listen to West explain why he thinks the 13th amendment on slavery should be abolished: 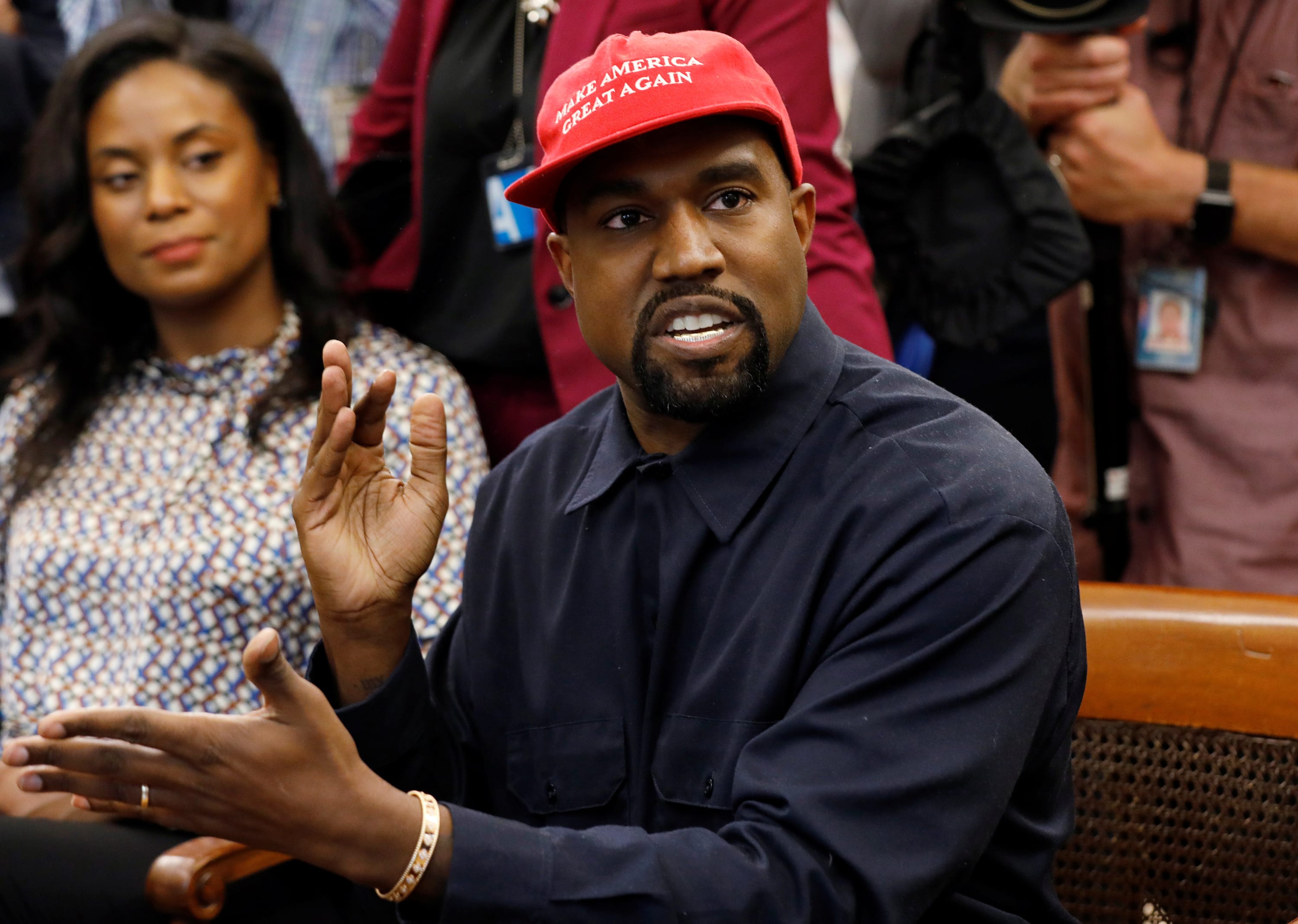 2 years agoVideo
0:37
West explains why he thinks the 13th amendment abolishing slavery should itself be abolished 0:37

Holding out his phone, West showed Trump a picture of a hydrogen-powered plane that he thought should replace Air Force One.

"This right here is the iPlane 1," he said. "This is what our president should be flying."

West also had a sartorial suggestion for Trump, proposing a hat that says just "Make America Great" — dropping the "again."

At the end of West's lengthy, sometimes-hard-to-follow dialogue, even Trump seemed at a loss.

"I tell you what: that was pretty impressive," the president said.

"It was from the soul," West replied. "I just channeled it."

West later told reporters of his verbal stylings: "You are tasting a fine wine that has multiple notes to it. You better play 4D chess with me.… It's complex."

Taking questions from reporters, the rapper also voiced concern about stop-and-frisk policing. Trump this week called on Chicago to embrace the tactic, which allowed police to detain, question and search civilians without probable cause, though it was deemed unconstitutional in New York City because of its overwhelming impact on minority residents.

Asked about his comments in 2005 that President George W. Bush didn't "care about black people" after Hurricane Katrina, West said that "we need to care about all people" and that he "was programmed to think in a victimized mentality."

Trump and West previously appeared together shortly after Trump's 2016 election in the lobby of Trump Tower in New York.

Asked what the two had talked about during their December meeting, West responded briefly that time: "Life. We discussed life."

While Trump has been shunned by much of the Hollywood establishment, he has a fan in West, who tweeted earlier this year that the two share "dragon energy."

"You don't have to agree with trump, but the mob can't make me not love him. We are both dragon energy. He is my brother," West wrote.

West is married to reality television star Kim Kardashian West, who successfully pushed Trump to grant a pardon to a drug offender earlier this year.

West himself has suggested he might be open to wading into politics, including a run for president in 2020.

Asked if West could be a future presidential candidate, Trump said, "Could very well be." West shot back, "Only after 2024."

After all that, the president brought the show to a close by suggesting, "Let's go have some lunch, OK?" 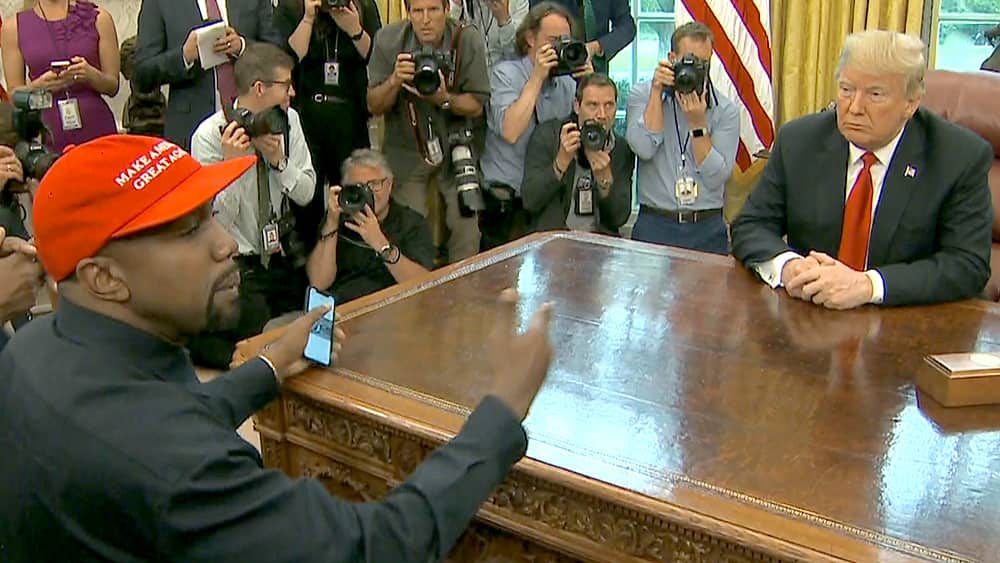