Pope John XXIII will also be made a saint, Vatican says 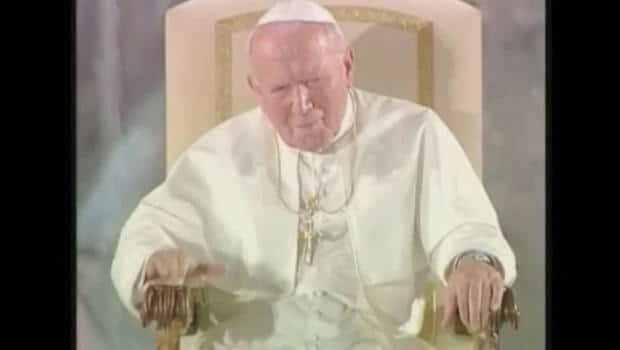 In a major demonstration of his papal authority, Francis decided that John XXIII could be declared a saint even though the Vatican hasn't confirmed a second miracle attributed to his intercession. The Vatican said Francis had the power to dispense with such requirements and proceed with only one confirmed miracle to his name.

The ceremony is expected before the end of the year. The date of Dec. 8 has been floated as one possibility, given it's the feast of the Immaculate Conception, a major feast day for the church. Polish prelates continue to press for October, to mark the 35th anniversary of the Polish-born John Paul's election, but Vatican officials have suggested that's too soon to organize such a massive event.

The announcement came on a remarkable day melding papacies past and present: It opened with Francis and Pope Emeritus Benedict XVI attending their first Vatican ceremony together, sitting side-by-side on matching papal chairs for the unveiling of a statue in the Vatican gardens. It continued with the publication of Francis' first encyclical, a meditation on faith that was largely written by Benedict before he retired. And it climaxed with Francis' decision to canonize two other predecessors.

Each event, historic on its own, would have captured headlines. But the canonization announcement capped them all, reflecting the priorities of this unique pontificate that has already broken so many rules, from Francis' decision to shun papal vestments to his housing arrangements, living in the Vatican hotel rather than the stuffy Apostolic Palace.

To anyone who has been paying attention, Francis' decision to canonize John Paul and John XXIII should come as no surprise: The Jesuit was made a cardinal by John Paul and is very much a pope of the Second Vatican Council, the ground-breaking church meetings that brought the Catholic Church into the modern world. John XXIII opened Vatican II a year before his death in 1963.

"Two different popes, very important to the church, will be announced saint together - it's a beautiful gesture," said the Rev. Jozef Kloch, spokesman for Poland's Catholic bishops, who like most Poles was overjoyed by the news of John Paul's impending canonization but impatient to know the date.

Francis will set the date at an upcoming meeting of cardinals.

The Vatican spokesman, the Rev. Federico Lombardi, confirmed that the miracle that brought John Paul to the ranks of saints concerned a Costa Rican woman.

The Spanish newspaper La Razon has identified her as Floribeth Mora, and said she suffered from a cerebral aneurism that was inexplicably cured on May 1, 2011 — the date of John Paul's beatification, when 1.5 million people filled St. Peter's Square to honor the beloved Polish pontiff.

La Razon reported last month that Mora awoke with debilitating head pain on April 8, 2011 and went to the hospital, where her condition worsened to the point that she was sent home with only a month to live.

Her family prayed to John Paul, and the aneurism disappeared.

La Razon quoted her doctor, Dr. Alejandro Vargas, as saying: "It surprised me a lot that the aneurism disappeared, I can't explain it based on science."

The Associated Press traveled to Mora's home in Costa Rica this week, but was told that she was bound by secrecy and couldn't discuss her case. With the miracle now approved by Francis, she planned to tell her story Friday at a press conference organized by the Costa Rican church. Outside her home is a colorful shrine to John Paul, with a photo of the late pope next to a statue of the Madonna and surrounded by flowers, candles and Christmas lights.

John Paul, who was pope from 1978-2005, revolutionized the papacy, traveling the world and inspiring a generation of young Catholics to be excited about their faith. He was the first Polish pope and the first non-Italian in 455 years — a legacy that continued with the German-born Benedict XVI and Argentine Francis.

On the anniversary of John Paul's death this year, Francis prayed at the tombs of both John Paul and John XXIII — an indication that he sees a great personal and spiritual continuity in them.

Benedict spent much of his pontificate trying to correct what he considered wrong interpretations of Vatican II, insisting it wasn't the break from the past that liberals believed. The council opened the church to people of other faiths and allowed for Mass to be celebrated in the languages of the faithful, rather than Latin.

Two popes get along

While not disagreeing outright with Benedict, Francis seems to take a more progressive read of Vatican II and its call to go out into the world and spread the faith — a priority he has shown in the first months of his pontificate.

The two popes, however, clearly get along.

"Your holiness, good day and thank you!" Francis beamed on Friday as he greeted Benedict in the Vatican gardens for the unveiling of the statue. Benedict, 86, appeared in good form, walking slowly but on his own and greeting well-wishers.

The Vatican's complicated saint-making procedure requires that the Vatican certify a "miracle" was performed through the intercession of the candidate — a medically inexplicable cure that is lasting, immediate and can be directly linked to the prayers offered by the faithful. One miracle is needed for beatification, a second for canonization.

Benedict put John Paul on the fast track for possible sainthood when he dispensed with the traditional five-year waiting period and allowed the beatification process to begin weeks after his John Paul's death. Benedict was responding to chants of "Santo Subito!" or "Sainthood Immediately" which erupted during John Paul's funeral.