Spent 209 days at sea after leaving San Francisco in June 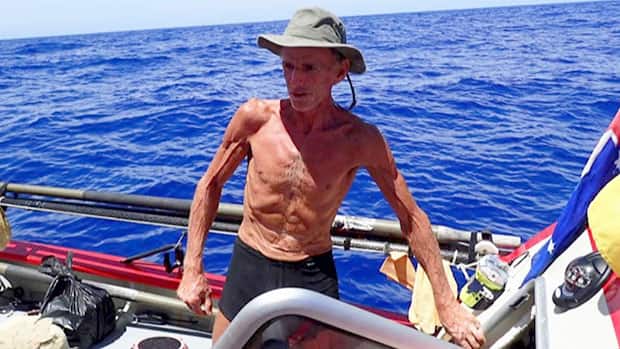 5 years ago
1:49
John Beeden,53, becomes the first person to row solo non-stop from North America to the Australian mainland 1:49

Beeden, 53, rowed more than 7,400 nautical miles across the Pacific Ocean, after leaving San Francisco in his six-metre boat "Socks" on June 1 this year.

He had been rowing for up to 15 hours a day, local media said.

Beeden, who hails from Sheffield, England, and has called Burlington, Ont., home since 2004, was greeted by his Canadian wife Cheryl, two teenage daughters and a crowd who had gathered on the dock in Cairns, in far north Queensland.

He was immediately greeted by Australian customs officials after stepping onto dry land after 209 days at sea, according to local media.

Beeden had previously rowed the Atlantic Ocean solo, before deciding to tackle the Pacific Ocean.

"About 14 and a half thousand kilometres — that's a long way. Only ever do it once in your life," he told the Australian Broadcasting Corporation.

Didn't think I could go on and had to dig deep and getting pushed back hundreds of miles that you have already rowed and you have to row it all again.- John Beeden

He had hoped to reach Australia by mid-November, but weather conditions blew out his estimated arrival by more than a month.

"Didn't think I could go on and had to dig deep and getting pushed back hundreds of miles that you have already rowed and you have to row it all again," he said.

Beeden's daughter steadied him and he said it felt strange to be on dry land again.

His wife Cheryl Beeden said he had had a tough journey, but that might not stop him from aiming for more records.

"I kind of think it's like childbirth because he says he's not going to get in another boat for awhile but I am sure in a couple of weeks he'll be having some other adventure and I will have to restrain him a little bit."

Beeden lost nearly 5 kilograms and said his running muscles had evaporated and changed to rowing muscles.