A group of Japanese activists has landed on Uotsuri, one of a group of islands at the centre of an escalating territorial dispute with China, Japan's coast guard says. 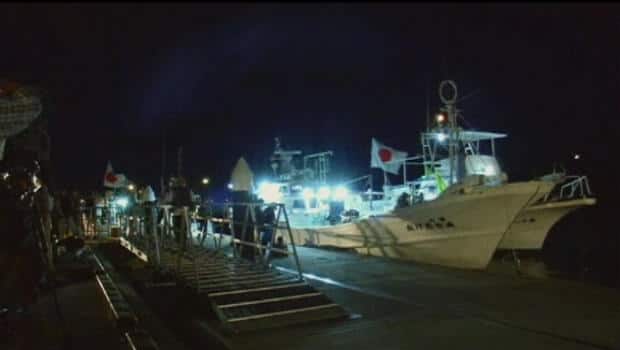 8 years agoVideo
1:14
Raw video: A small flotilla of ships with Japanese activists and lawmakers leave for the disputed Senkaku/Diaoyu Islands between Japan and China 1:14

A group of Japanese activists has landed on Uotsuri, one of a group of islands at the centre of an escalating territorial dispute with China, Japan's coast guard says.

Nine or 10 people landed without authorization early Sunday in the small archipelago known in Japan as the Senkakus and in China as the Diaoyu islands, the coast guard in southern Japan's Okinawa prefecture said. The Japanese group, numbering more than 100 and including several politicians, had headed to the islands early Saturday morning.

Plans for the visit drew a protest from China's Foreign Ministry, which lodged a formal protest ahead of the visit. Both countries have laid claim to the uninhabited islands that lie in the waters north of Taiwan.

The group plans to hold a ceremony to commemorate the country’s Second World War dead. Boats will circle the islands during the event.

Photos from Japan's Kyodo News Agency showed several men and a woman brandishing a Japanese flag atop rocks on the shore of the uninhabited island.

The Japanese protest flotilla is a response to a similar action by 14 Chinese activists who reached the islands on Wednesday. A handful of the activists swam ashore, planting Chinese flags and declaring the islands part of China.

Ownership of the islands would provide exclusive mineral, oil and fishing rights in surrounding waters.