Jamal Khashoggi killing: How the case has unfolded

Jamal Khashoggi, a Saudi writer living in the U.S., disappeared in early October 2018. Here's a look back at the case, which began when the writer walked into the Saudi Consulate in Istanbul.​

Jamal Khashoggi, a Saudi writer living in the U.S., disappeared in early October and an investigation later concluded he was killed. Khashoggi held prominent positions at several pro-royal media outlets in Saudi Arabia and even advised top government officials — but later became a critical voice and left the country.

Here's a look back at the case, which began when the writer walked into the Saudi Consulate in Istanbul.​

Oct. 2: Khashoggi goes to the Saudi Arabian Consulate in Istanbul to try to get papers required to marry his Turkish fiancée, Hatice Cengiz. She watches him enter and waits for him to emerge, but the journalist hasn't been seen since.

Oct. 4: The consulate says Khashoggi had left the building and then disappeared. But reports from Turkish officials say they believed the columnist was still inside the building.

Oct. 6: Turkish officials say they believe the columnist, who had written critically about the Saudi royal family, had been killed in the consulate.

"We believe that the murder was premeditated and the body was subsequently moved out of the consulate," an unnamed Turkish official told Reuters.

Watch a clip from earlier this year, when Khashoggi told The National there is "no room for critical dissent" in Saudi Arabia. 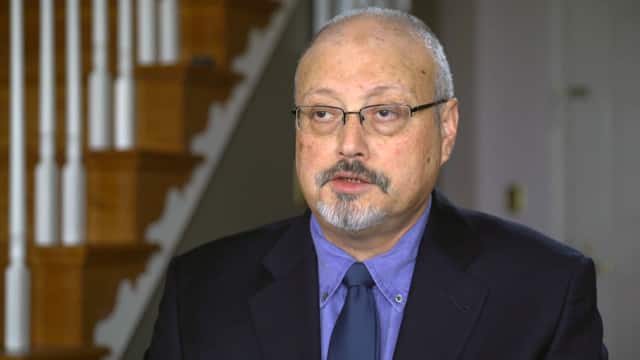 2 years ago
1:14
Self-exiled Saudi dissident Jamal Khashoggi said earlier this year that the Saudi government has been moving toward nationalist radicalism. 1:14

Oct. 8:  Turkish authorities summon the Saudi ambassador, saying the Saudis need to provide evidence that the missing man had actually left the consulate.

"If he left, you must prove this, you will prove this, even if it's with visuals," Turkish President Recep Tayyip Erdogan says during a visit to Hungary. "Those who ask Turkish authorities, 'Where is he?' should first be asking, 'How did this happen?'"

Oct. 9:  Turkish officials announce they would search the consulate. A spokesperson for the Turkish Foreign Affairs Department says Saudi officials had indicated they were "open to co-operation."

Khashoggi's fiancée writes an opinion piece in the Washington Post imploring U.S. President Donald Trump to help and urging the Saudis to release CCTV footage from the consulate.

Oct. 10:  Trump wades more deeply into the issue, telling reporters he had spoken with the Saudis about what he called a "bad situation," but he did not disclose details of his conversations. He also says the U.S. is working "very closely" with Turkey, "and I think we'll get to the bottom of it."

Trump's remarks come as Turkish media release images of what they say was an "assassination squad" arriving in the country.

Oct. 11: Trump appears on Fox & Friends and says his administration is taking the case "very, very seriously." But he also tells Fox News that limiting arms sales to Saudi Arabia, a close U.S. ally with a deal to buy hundreds of billions of dollars worth of American weaponry, "would be hurting us."

Oct. 12:  Canadian Prime Minister Justin Trudeau weighs in, saying the case is "of course of concern, and we join with our allies around the world in expressing serious issues with these reports." Trudeau says his government would respect an agreement negotiated under the previous government that allowed the sale of Canadian-made light-armoured vehicles to the Saudis.

Oct. 13:  A Turkish newspaper prints an explosive claim, saying Khashoggi's torture and killing was recorded on his Apple Watch. The initial reports contain few details, but the paper reports that Turkish authorities had obtained the audio from the journalist's iPhone, which he had given to his fiancée before entering the consulate, and his iCloud account.

Oct. 14:  The Saudis caution other nations against making threats or imposing sanctions, saying if it is targeted, it will respond with "greater action."

The statement comes after Trump tells 60 Minutes correspondent Lesley Stahl there would be "severe" consequences if Saudi Arabia is found to be involved in the killing of the U.S.-based journalist. But the president notes there are still not enough details about the case. "As of this moment, they deny it and they deny it vehemently. Could it be them? Yes."

As the rhetoric escalates, top businesses start announcing their withdrawal from the Davos in the Desert summit, a Saudi-run conference meant to promote foreign investment in the kingdom.

Oct. 15:  The planned search of the consulate goes ahead. The state-run Anadolu news agency says the Turkish investigative team includes a prosecutor, deputy prosecutor, anti-terror police and forensic experts. Trump, after speaking to Saudi King Salman, tells reporters, "I don't want to get into his mind, but it sounded to me like maybe these could have been rogue killers, who knows? We'll try getting to the bottom of it very soon. His was a flat denial."

Oct. 16: In an interview with The Associated Press, Trump criticizes the widespread outrage directed at Saudi Arabia.

"I think we have to find out what happened first," he said. "Here we go again with, you know, you're guilty until proven innocent. I don't like that. We just went through that with Justice Kavanaugh and he was innocent all the way as far as I'm concerned."

Trump also weighs in on Twitter, reiterating the Saudi denials.

...during the call, and told me that he has already started, and will rapidly expand, a full and complete investigation into this matter. Answers will be forthcoming shortly.

Oct. 17:  A Turkish team searches the home of the Saudi consul, who had left the country not long after Khashoggi's disappearance. The search coincides with a grisly news report that contained details from a purported recording of Khashoggi's torture and slaughter.

The Washington Post chooses to release what may be Khashoggi's final column, an opinion piece calling for more free expression in Arab states.

Oct. 18:  There is a major shift in the U.S. president's message. Trump tells reporters it "certainly looks" as though the journalist is dead, and again threatens "very severe" consequences if it's found the Saudis killed him.

Watch Trump tell reporters it 'certainly looks' like the dissident reporter is dead. 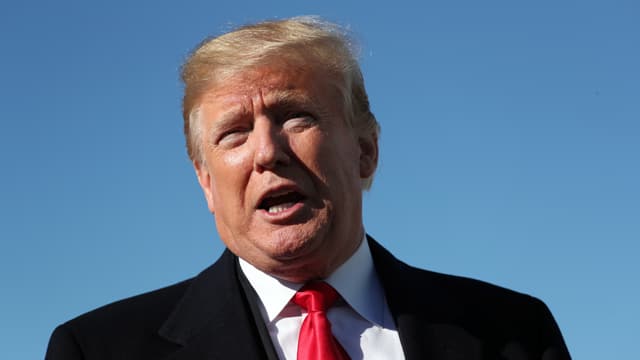 Trump says it 'certainly looks' like Khashoggi is dead

Oct. 19 (and into early Oct. 20): Saudi television says a preliminary investigation has concluded Khashoggi is dead. The Saudi public prosecutor says Khashoggi died in a "fist fight" inside the consulate.The country's intelligence chief is sacked and 18 people detained, state TV says. Asked by a reporter whether he thinks Saudi Arabia's explanation for Khashoggi's death was credible, Trump says, "I do. I do." But he said before he decided what to do next, he wanted to talk to Saudi Crown Prince Mohammed bin Salman.

Oct. 21: Saudi Arabian Foreign Minister Adel al-Jubeir said Saudi officials do not know the details of how Khashoggi was killed in their consulate. "Unfortunately, a huge and grave mistake ...  those responsible will be held accountable," he told Fox News.

Watch footage of a man dressed as Khashoggi leaving the Saudi Consulate in Istanbul. 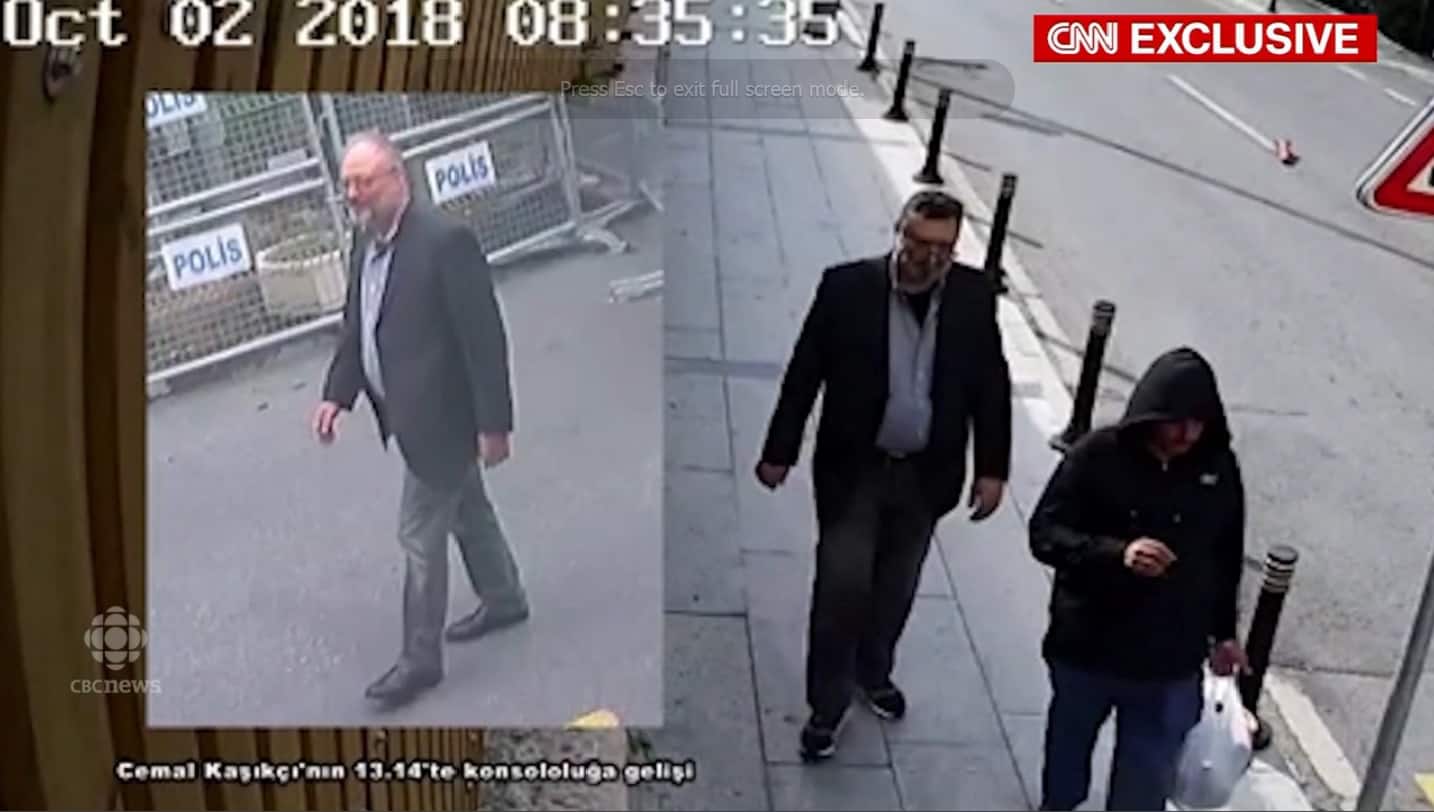 2 years ago
0:26
Surveillance video shows a man appearing to wear Jamal Khashoggi's clothes leaving the Saudi Consulate in Istanbul after the journalist was killed there on Oct. 2. 0:26

Oct.. 24: Saudi Arabia's crown prince says the Khashoggi case is "painful" and "not justifiable," and vows justice would prevail.

Oct. 25: Saudi prosecutors, citing evidence provided by Turkey, admit Khashoggi's death was "premeditated," and not an accident, as Saudi officials had contended.

Oct. 27: U.S. Defence Secretary Jim Mattis says Khashoggi's killing "undermines regional stability," at a speech in the Middle East. The Saudi foreign minister accuses the international media of "hysteria" and said journalists were rushing to judgment in the Khashoggi case.

Oct. 29: Cengiz says Trump "should not pave the way for a cover up of my fiancé's murder" and urges him to set aside U.S. trade interests and demand Riyadh disclose more details surrounding the killing.

Oct. 31: A top Turkish prosecutor reveals Khashoggi was strangled as soon as he entered the Saudi consulate as part of a premeditated killing and that his body was dismembered.

Nov. 10: Turkey's president acknowledges officials from Saudi Arabia, the United States, Germany, France and Britain have all listened to audio recordings of Khashoggi's killing. It is the first public acknowledgement that the tapes exist.

Nov. 12: A spokesperson for the Canadian Security Intelligence Service confirms Canada's spy chief flew to Turkey to hear the recordings of Khashoggi's killing and subsequently briefed the prime minister and other Canadian officials on what he heard.

Nov. 16: The Washington Post reports the CIA believes Prince Mohammed ordered a hit on Khashoggi, citing a source familiar with the matter. The source says the CIA had briefed other parts of the U.S. government on its assessment.

Nov. 17: In a statement released by the U.S. State Department, the Trump administration denies it has reached a final conclusion in who was behind Khashoggi's killing. Trump tells reporters that when it came to the crown prince, "as of this moment we were told that he did not play a role."

Later in the day, Trump calls media reports from the previous day "very premature" and says he will soon receive a "very full report" on who was responsible for the Saudi writer's death.

Nov. 19: Germany issues entry bans for 18 Saudi citizens suspected to be involved in Khashoggi's death, effectively banning them from the European Union's passport-free Schengen zone. France's foreign minister also says his country is mulling sanctions for those linked to the killing.

Meanwhile, Saudi Arabia's King Salman expresses support for his son, the crown prince, during his first major speech since the the journalist's murder, making no mention of allegations Prince Mohammed ordered the killing.

Saudi media also report the crown prince will attend the G20 summit in Buenos Aires later this month — a gathering that world leaders, including Trump and Trudeau, are slated to attend.

Nov. 20: Trump releases a statement that says the U.S. will stand by Saudi Arabia, its "steadfast ally," despite its role in Khashoggi's death. The Trump administration will continue arms deals with the Saudis and won't levy any new punishments on the kingdom or Prince Mohammed, the statement reads, drawing the ire of Congressional leaders on both sides of the aisle.

Nov. 22: The Turkish newspaper Hurriyet reports that CIA Director Gina Haspel signalled to Turkish officials in October that U.S. intelligence officials had a recording of a call in which Prince Mohammed discusses wanting to "silence" Khashoggi. When asked if the reports are true, Trump says, "I don't want to talk about it. You'll have to ask them [the CIA]."

Nov. 26: Turkish police — using sniffer dogs and a drone — scour a luxury villa and nearby property in northwestern Turkey for Khashoggi's remains. Government officials and the state-run news agency Anadolu say investigators determined the mansion's owner had been in contact with one of the suspects in the writer's slaying.

Nov. 29: With Trudeau and Prince Mohammed both in Argentina for a weekend G20 summit, Canada imposes its own set of sanctions against 17 Saudi nationals, effectively freezing their assets in Canada and banning them from entering the country.