Italians turned out by the hundreds in several cities and towns to vent anger, sometimes violently, over the latest pandemic restrictions that force restaurants and cafés to close early and shutter cinemas, gyms and other leisure venues. 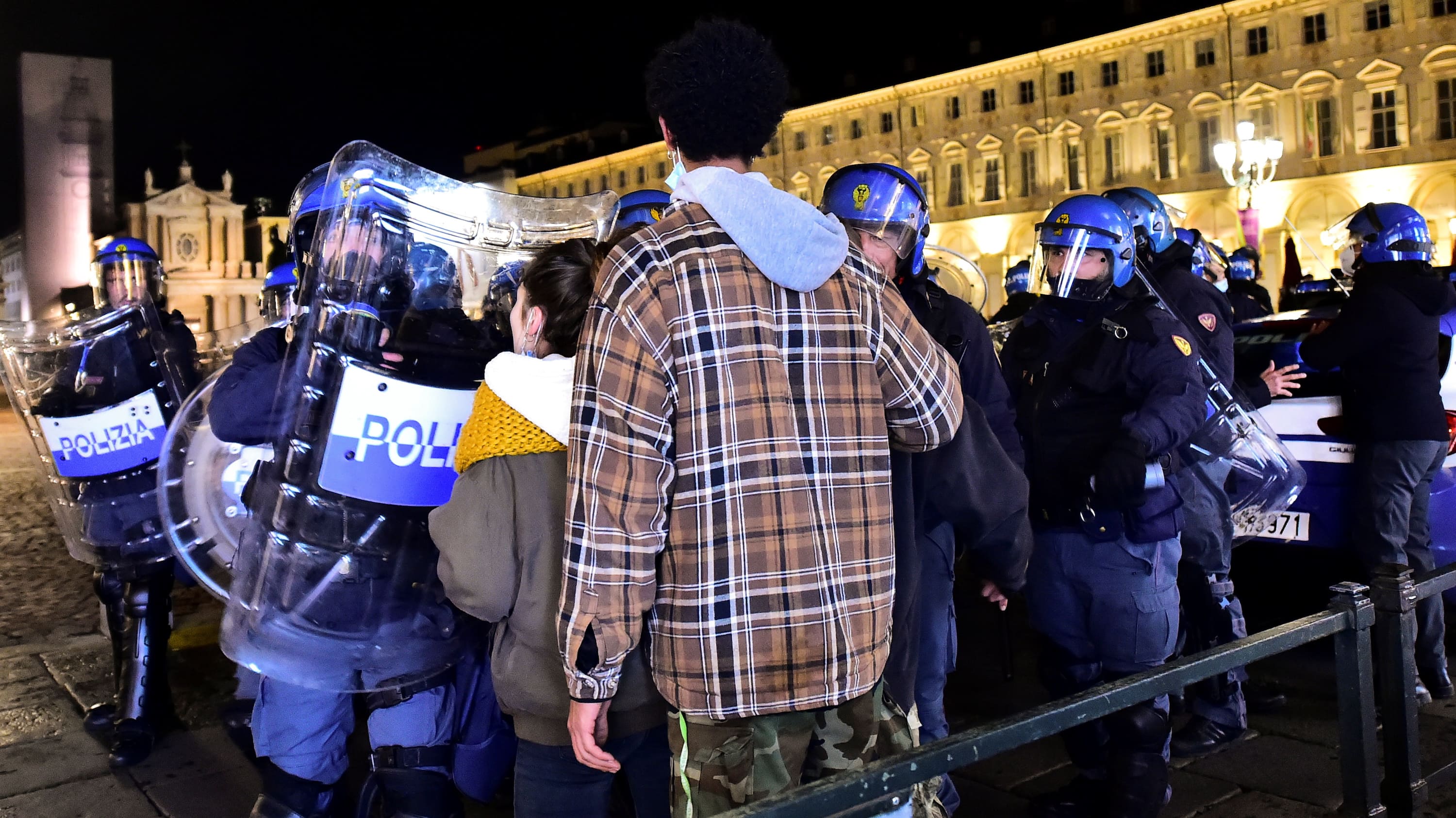 1 month agoVideo
1:03
Many shop windows along the central piazza in Turin, Italy were smashed after hundreds of people protested against the recent closure of bars and restaurants. 1:03

Protesters turned out by the hundreds in Turin, Milan and other Italian cities and towns Monday to vent their anger, sometimes violently, at the latest pandemic restrictions that force restaurants and cafés to close early and shutter cinemas, gyms and other leisure venues.

In the northern city of Turin some demonstrators broke off from a peaceful protest, smashing store windows on an elegant shopping street, setting smoke bombs and hurling bottles at police in a main city square where the Piedmont regional government is headquartered, RAI state TV said.

A photographer was injured by a hurled bottle, RAI said. Police fired tear gas to clear the protesters in Piazza del Castello.

In that same square, hours earlier, some 300 taxis peacefully lined up in neat rows to draw attention to their economic losses from the implosion of tourism and disappearance of workers from the city centre as they do their jobs remotely during the pandemic.

Triggering the violence in Turin were a group of "ultras," as violent soccer fans are known, the LaPresse news agency said. It said five of the protesters were detained by authorities.

The protests began shortly after the national government's order took effect, requiring bars, cafés and restaurants to close their doors at 6 p.m. for the next 30 days as Italy tries to rein in the resurgence of coronavirus infections in recent weeks.

Since most Italians don't dine out before 7:30 p.m. at the earliest, the decree effectively wiped out most of the restaurants' already reduced revenue in the pandemic, although takeout and delivery can continue until midnight.

On Tuesday, Italian Premier Giuseppe Conte's cabinet was preparing a new decree with 5 billion euros ($7.8 billion Cdn) in financial aid for businesses hurt by the measures, which were announced Sunday.

Also Tuesday, the Health Ministry said that Italy has registered 21,994 new coronavirus infections over the past 24 hours, the highest daily tally since the start of the country's outbreak and up from the previous record of 21,273 posted on Sunday. Daily infections have increased eight-fold in less than a month.

The ministry also reported 221 deaths related to COVID-19, against 141 the day before — the first time Italy has registered more than 200 fatalities in a single day since mid-May.

A total 37,700 people have now died in Italy due to coronavirus, while 564,778 cases of the disease have been registered to date.

Last week, a peaceful march by shopkeepers and other business owners in Naples, upset about a regional curfew that orders citizens off the streets at 11 p.m., turned violent near the Campania region's headquarters.

Investigators were quoted in Italian media as saying the violence, in which police officers were injured, bore the hand of the Camorra, the local organized crime group.

Smaller cities, including Catania in Sicily, and towns also saw protests Monday. In Cremona, a town in northern Lombardy, restaurant owners turned out in front of the local interior ministry's office.

After banging pots and pans, they left them piled up in the street to highlight their economic woes worsened by the latest early-shutdown decree, the ANSA news agency said.