As pandemic restrictions were lifted this past week, with Italy opening its borders to travellers, the country's world-renowned museums and cultural sites saw only a trickle of tourists arriving. Italians now have the chance to see their own masterpieces by booking just days in advance, rather than weeks or months.

On a clear-skied, mid-week morning, Italian art lover Maria Grazia stood with her two teenaged sons outside the Vatican Museums, waiting for its tall, arched doors to open to the public after three months of being firmly shut.

Pre-lockdown, she and her family would have stood in a lineup that often wound hundreds of metres along the walls of Vatican City. Today, the line is only a few metres long.

"I was here once 30 years ago, and my sons have never come," said the lifelong resident of Rome, who declined to give her last name. "It's just always seemed too complicated to get in before."

Italy's nationwide lockdown in early March was one of the first in Europe. The virus has brought almost 34,000 deaths, social isolation, job loss and deep worry about the country's economic future.

Tourists in their own town

As pandemic restrictions were lifted this past week, with Italy opening its borders to EU travellers and allowing inter-regional travel, the country's world-renowned museums and cultural sites also reopened. With only a trickle of EU tourists arriving, Italians have a historic opportunity: the chance to see their own masterpieces free from throngs of tourists and by booking just days in advance, rather than weeks or months.

"I've been here six or seven times, but this is first I've ever seen these works of art without battling the hordes," said Patrizia Poggi, who works as a custodian at Rome's nearby Capitoline Museums. She was also among the first visitors at the newly reopened Vatican Museums.

Like many taking advantage of the drop in numbers, Poggi was keen to see the Michelangelo-frescoed Sistine Chapel near empty, and also to gaze upon the ancient sculpture of Laocoön and His Sons, a stunning, life-sized marble of a Trojan priest and his sons attacked by sea serpents excavated in the early 16th century.

Normally, the Vatican Museums see an average of 20,000 people stream through its galleries each day — and in peak times, as many as 29,000, said director Barbara Jatta.

Reservation numbers for the initial days of reopening, by contrast, hovered between 1,000 and 2,000. The three-month closure has cost the Vatican an estimated $38 million in lost ticket sales. Jatta admitted with a chuckle that she misses the crowds. But for locals, she said "this is the moment of a lifetime to come visit the museum."

To cater to their new target audience, the Vatican has shifted opening hours later in the day to make it easier for Rome's inhabitants to visit after work; it now closes at 8 p.m. on  most weekdays and 10 p.m. on Thursdays and Fridays. It has also limited group visits to 10 and lengthened intervals between them to 15 minutes in order to manage the physical distancing regulations.

The museums, which include a research component, took advantage of the lockdown to improve their website and online archives; forward work on an Egyptian coffins project; and complete the five-year-long restoration of two frescos believed to be the last works of the Renaissance master Raphael, Jatta said.

Museums down millions of dollars

The Uffizi Gallery in Florence is also encouraging Italians to visit. Before the pandemic, as many as 10,000 visitors passed through famous Renaissance galleries in a day. The first week after reopening, reservations and daily visits averaged about 1,000 a day, reaching a peak of 2,100 the first Sunday after reopening.

"We haven't seen these low numbers since the 1950s," said Eike Schmidt, director of the Uffizi. Like Jatta, he is doing his best to put a positive spin the loss in ticket sales — $18 million for the museum's 85 days of closure.

"For this type of tourism where you can see masterpieces without others in your way, you have to go back to the times of Dostoevsky, Rilke and Nathaniel Hawthorne," he said, referring to three famous visitors from the 19th century.

Indeed, the unusual nature of a pandemic makes the reopening a historical anomaly. The Uffizi has been closed only three times before: during the Second World War, the 1966 Florence flood, and a Mafia bombing just outside the museum in 1993. After each closure, said Schmidt,  the numbers of visitors surged. But he doesn't expect to see that until there is a vaccine for COVID-19.

For Italy as a whole, it's bad economic news. Tourism makes up 13 per cent of the country's GDP.

But, Schmidt, along with Florence's Mayor Dario Nardella, is hoping to leverage the current situation to help shift how tourists visit the city and its treasures.

Tickets to the Uffizi, for instance, are now bundled to include a number of lesser-known, but world-class museums, with in built-in discount for those who stay longer and see more sites.

"In a city like Florence or Venice, people come from all over the world yet go to see a very limited set of attractions. So it's very important to put other attractions on their maps," he said.

A future in 'slow tourism'

Schmidt cited the much less visited archeological museum and the Museo Opificio delle Pietre Dure, a workshop of marble-inlay founded by the Medici family in the late 1500s and still operative today. Both are now part of the Uffizi ticket. He also plans to increase the number of theatre and musical events held in the lesser-known museums.

"Rather than just go through your bucket list and check off Michelangelo's David and Botticelli's Venus, you can see more and more in depth," Schmidt said. "It's a little like fast food and slow food. You get much more with slow food."

The allusion to slow food — the Italian-born movement to protect traditional foods that erupted in opposition to McDonald's going into Rome's Piazza di Spagna in 1986 — is no accident.

WATCH | Florence's mayor on the benefits of 'slow tourism': 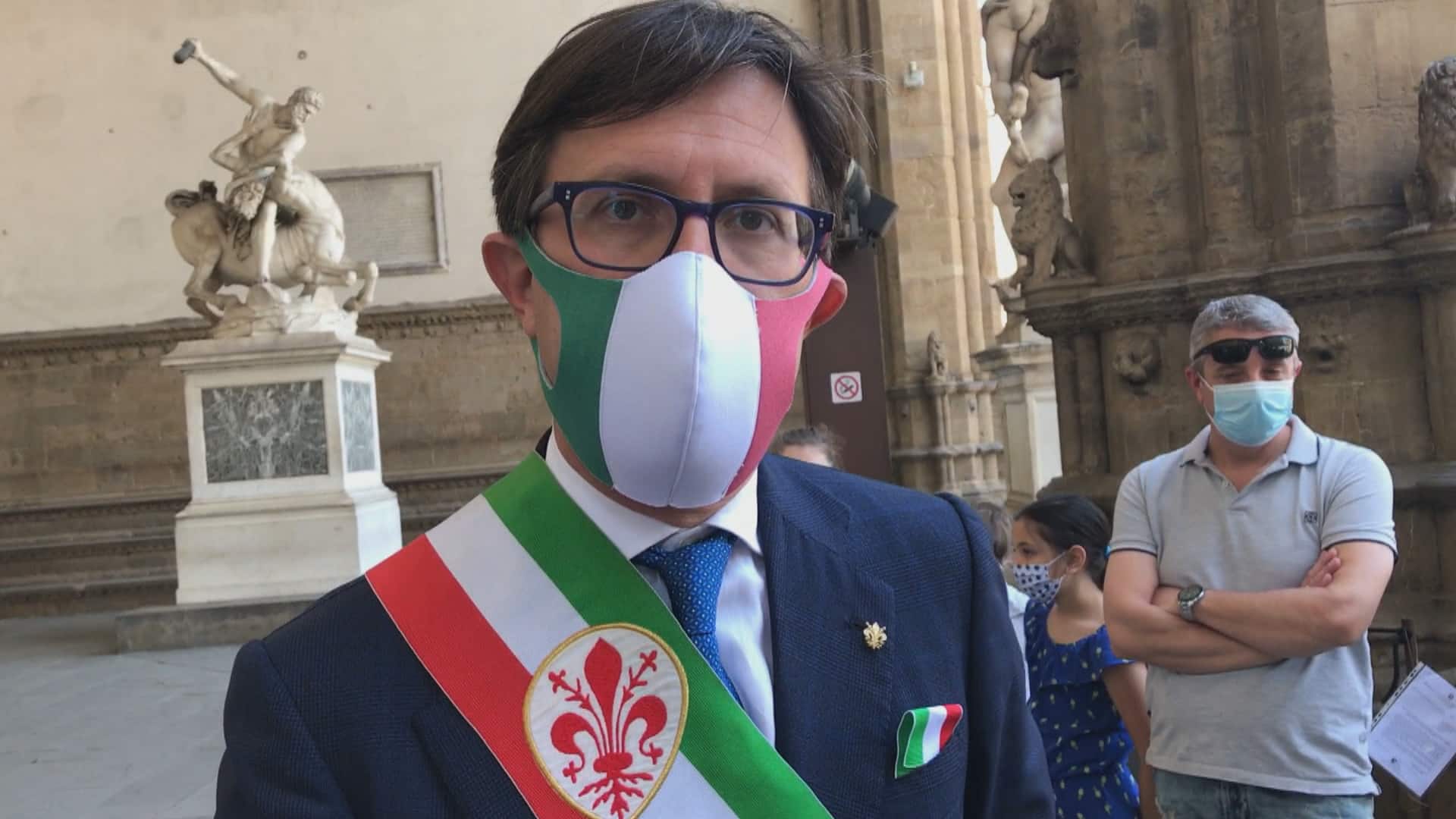 9 months ago
2:28
European countries are embracing 'slow tourism' as a form of economic recovery after the coronavirus pandemic. 2:28

Nardella, along with mayors across Europe, have hoisted the banner of "slow tourism" to describe their goals post-pandemic, and are pushing the European Commission to create a specific fund to help cultural and tourist cities become sustainable, resilient and livable.

"We want to use culture to send a message that after this crisis we want to change lifestyle models, the economy and model of tourism of the city," Nardella said, through a tri-coloured Italian flag mask the day the Uffizi re-opened.

He said with its thriving manufacturing and fashion industry, Florence is not solely dependent on tourism, like Venice. However, he says, tourism has overrun its historic centre, purging it of a diverse local life and economy.

To change that, Nardella has launched a new strategy with financial incentives to open businesses in the city centre, especially artisanal activities; for young couples to buy homes; and for international universities to set up campuses.

The city, he says, will also ban daily tourist buses from the centre, block the building of new hotels and place a three-year ban on new restaurants and pubs. Like Milan and Rome, kilometres of cycling paths will be laid down.

"We have to sell a new kind of tourism and slow tourism is a good strategy," Nardella said. "We don't want daily tourists only for three hours who take some photos and don't go into a museums or restaurants ... If you want to know Florence, you must stay in this city, living the sensations and experiences. This is the new view we understand after the terrible pandemic."