A military court has convicted an Israeli soldier of manslaughter for fatally shooting of a wounded Palestinian attacker who was lying incapacitated on the ground in the West Bank last March.

A military court in Tel Aviv convicted an Israeli soldier of manslaughter on Wednesday in the fatal shooting of a wounded Palestinian attacker, who was disarmed and lying incapacitated on the ground, in the occupied West Bank last March.

Sgt. Elor Azaria, 20, faces a maximum penalty of 20 years behind bars, though he is not expected to receive that much time. The military said he would be sentenced on Jan. 15. The defence team said it would appeal.

The verdict — which marks an extremely rare case of an Israeli military court siding against a soldier over lethal action taken in the field — caps a nine-month saga that has deeply divided the country. Defence officials have criticized Azaria's conduct while large segments of the Israeli public, along with members of the nationalist ruling coalition, have rallied behind him.

With Azaria's sentencing weeks away, the country now faces a heated debate over whether he deserves clemency. Within minutes of the verdict, leading politicians were already calling for him to be pardoned.

Under Israeli law, the country's largely ceremonial president has the authority to issue a pardon.

Hours after the verdict, Prime Minister Benjamin Netanyahu called for Azaria to be pardoned, plunging into the raging political debate that has divided the country and putting himself at odds with the military.

On his Facebook page, Netanyahu wrote: "I support granting Elor Azaria a pardon."

He also urged the public to support the army and its commanders. 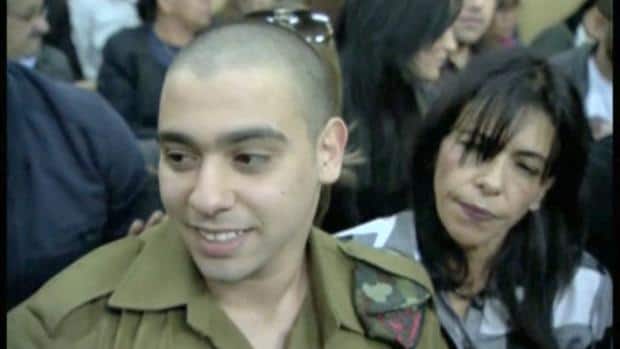 In delivering the verdict of the three-judge panel, Col. Maya Heller systematically rejected all of Azaria's defence arguments, saying "the fact that the man on the ground was a terrorist does not justify a disproportionate response."

Those arguments included a claim that Abdel Fattah al-Sharif was already dead when Azaria shot him in the head and that he was acting in self-defence, though the man had already been disarmed and was lying on the ground.

"The court said … he was a poor witness, they didn't believe him, he changed his story many times and, in the end, there was no objective danger to him," freelance reporter Irris Makler said from Jerusalem.

The March 24 shooting, and the tense moments leading up to it, were captured on video by a Palestinian human rights activist in the city of Hebron.

Azaria was 19 at the time, and working as an army medic. Al-Sharif and another Palestinian assailant were shot after attacking and stabbing an Israeli solider manning a military checkpoint in Hebron. The second assailant died immediately.

The shooting occurred at the height of what has become more than a year-long wave of Israeli-Palestinian violence.

Azaria entered the court smiling and appearing confident, and he was embraced by a few dozen relatives and friends. But as the verdict was delivered, he stared gloomily ahead, and tensions quickly boiled over in the cramped, crowded courtroom.

Members of Azaria's family clapped sarcastically as the decision was delivered, some screaming "Our hero!" A female relative was kicked out of the courtroom for screaming at the judges, and a second woman stormed out, shouting, "Disgusting leftists."

After the judges walked out, Azaria's mother, Oshra, screamed, "You should be ashamed of yourselves." Azaria tried to comfort her and calm her as she wailed. Another family member whipped his jacket at a female reporter, missing his target and instead hitting another relative. 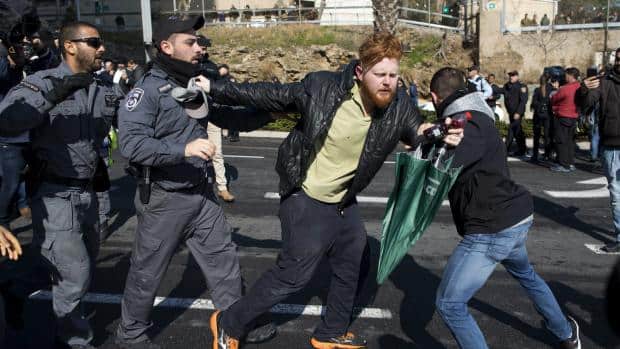 4 years ago
0:33
Supporters clash with police after conviction announced 0:33

Hundreds of the soldier's supporters, many of them young religious men wearing skullcaps, gathered outside the military court in Tel Aviv ahead of the verdict. The crowd, holding large Israeli flags and banners, periodically scuffled with police.

"Gadi, Gadi, watch out. Rabin is looking for a friend," the demonstrators chanted. The crowd was quickly dispersed without any further violence.

Lt. Col. Nadav Weissman, a military prosecutor, said the verdict was "important, clear, decisive and speaks for itself."

Israel's defence minister said he disagreed with the verdict, but called on the public to respect the court's decision.

"Despite the difficult verdict, the defence establishment will do everything it can to assist the soldier and his family," Avigdor Lieberman told reporters.

"This is an achievement of the court that it condemned the soldier," said Yousri al-Sharif, who watched with his family as the verdict was read on live television.

It took the lead judge almost three hours to deliver the verdict.

"I was exhausted and tense," he said. "I smoked two packs of cigarettes while watching."