Israel said it struck dozens of Iranian targets in Syria on Wednesday in a "wide-scale" operation in response to rocket fire on the Israeli-controlled Golan Heights the day before.

Israel said it struck dozens of Iranian targets in Syria on Wednesday in a "wide-scale" operation in response to rocket fire on the Israeli-controlled Golan Heights the day before.

A Britain-based war monitoring group said the strikes killed at least 23 people, including 15 non-Syrians, some of them Iranians. Syrian state media only reported that two civilians were killed.

The exchange of fire along the increasingly tense frontier comes as Iran and its allies face blowback across the region, with mass protests against Tehran-aligned governments in Lebanon and Iraq, as well as demonstrations in Iran itself over a recent hike in fuel prices.

Israel has repeatedly struck Iran-linked targets in Syria in recent years and has warned against any permanent Iranian presence on the frontier. Last week, Israel killed a senior commander of the Palestinian Islamic Jihad, an Iran-backed group in the Gaza Strip, setting off two days of heavy fighting. 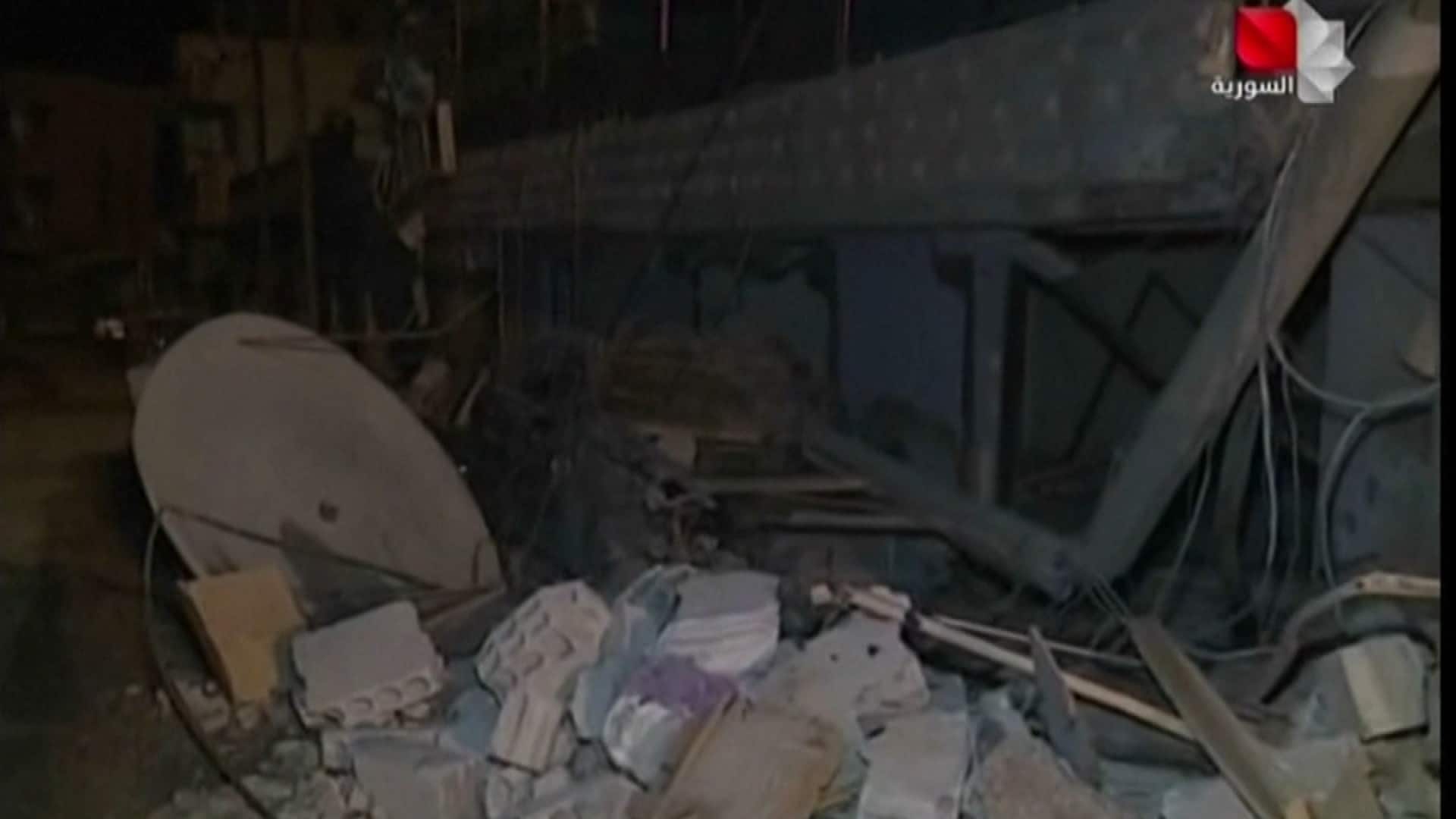 1 year agoVideo
0:30
Israel's defence minister warns that Iran's leadership is 'no longer immune' from Israeli attacks after show of military strength in Syria 0:30

A separate airstrike targeted but failed to kill an Islamic Jihad leader in Damascus, underscoring the risk of escalation at various pressure points across the volatile region.

The death toll was reported by Rami Abdurrahman, who heads the Britain-based Syrian Observatory for Human Rights, an opposition activist group with a network of contacts across Syria. He said the dead included five Syrian troops, 16 Iranian and Iran-backed fighters, and two Syrian civilians.

The Observatory said the airstrikes targeted Quds Force arms depots in the Damascus suburbs of Kisweh and Qudsaya. Abdurrahman said several other areas were targeted in Wednesday's strikes, including the Mazzeh air base in Damascus, where air defence units are stationed.

Syria's state-run SANA news agency said the two civilians were killed by shrapnel when an Israeli missile hit a house in the town of Saasaa, southwest of Damascus. It said several others were wounded, including a girl in a residential building in Qudsaya, also west of the Syrian capital.

It claimed that Syrian air defences destroyed most of the Israeli missiles before they reached their targets.

Wednesday's strikes on Syria were the most intense since Jan. 21, when Israel claimed responsibility for a series of airstrikes on Iranian military targets in the Arab country, including munition storage facilities, an intelligence site and a military training camp, in response to an Iranian missile attack the previous day.

Israel had said the missile, fired by Iranian forces in Syria, was intercepted over a ski resort on the Golan Heights and that there were no injuries. That Iranian launch followed a rare Israeli daylight air raid near the Damascus International Airport.

On Tuesday, the Israeli military said it intercepted four incoming rockets from Syria. It said the attack "threatens Israeli security, regional stability and the Syrian regime," and vowed to "continue operating firmly and resolutely" against Iran in Syria.

Lt.-Col. Jonathan Conricus, a military spokesperson, said the significance of the retaliatory operation was the "multitude of targets" hit.

The targets included what he described as the Iranian headquarters at Damascus airport, where senior Iranian officials are based and which is used to co-ordinate shipments from Iran to its allies in Syria and beyond. He added that Israel also holds Syria responsible for hosting the Iranians.

Tuesday's rocket fire on the Golan was the sixth attempt by Iran to attack Israeli targets since February 2018, and all have been thwarted, Conricus said.

'Whoever harms us, we will harm them'

Israeli Prime Minister Benjamin Netanyahu has issued a series of warnings about Iranian actions throughout the Middle East and has vowed to respond firmly.

"I made it clear: whoever harms us, we will harm them. That's what we did tonight," he said early Wednesday. "We will continue to aggressively protect Israel's security."

"The rules have changed: whoever fires on Israel during the day will not sleep at night," he said. "Our message to the leaders of Iran is simple: you are no longer immune. Any place you dispatch your tentacles, we will chop them off."

Last week's airstrike targeting the Islamic Jihad commander in Syria marked a rare assassination attempt against a Palestinian militant in the Syrian capital. The militant, Akram al-Ajouri, survived the attack but his son and granddaughter were killed.

It came the same day as an Israeli airstrike killed a senior Islamic Jihad commander in Gaza, Bahaa Abu el-Atta, settling off the fiercest round of fighting there in years. The fighting killed at least 34 Palestinians and saw more than 450 rockets fired into Israel.

Iran has forces based in Syria, Israel's northern neighbour, and supports Hezbollah militants in Lebanon. In Gaza, it supplies Islamic Jihad with cash, weapons and training, and also supports Hamas, the Islamic militant group that rules the coastal territory.

Netanyahu claims Iran is using Iraq and far-off Yemen, where Tehran supports Shia Houthi rebels at war with a Saudi-led coalition backing the government, to plan attacks against Israel.