An Iranian oil tanker has sunk after burning for more than a week following a collision on Jan. 6 in the East China Sea, Chinese state media said on Sunday, adding that large amounts of oil were burning in the surrounding waters.

An Iranian oil tanker has sunk after burning for more than a week following a collision on Jan. 6 in the East China Sea, Chinese state media said on Sunday, adding that large amounts of oil were burning in the surrounding waters.

The stricken tanker, called the Sanchi, which had been adrift and on fire following the accident with the freighter CF Crystal, had "suddenly ignited" around noon local time, China Central Television (CCTV) said. 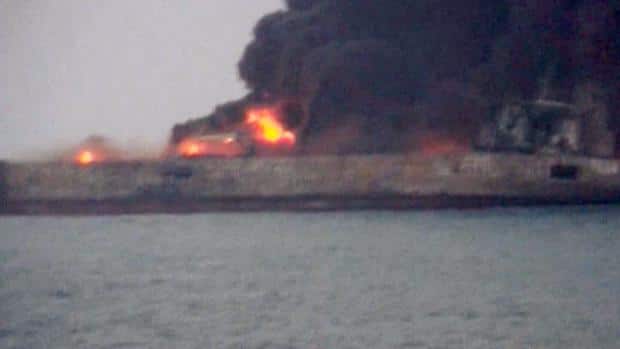 "Currently it has already sunk," CCTV said, citing the Shanghai maritime search and rescue centre. It showed video of a tower of billowing black smoke that it said reached as high as 1,000 metres, and flames on the surface of the water. The ship sank before 5 p.m. local time, the broadcaster said.

China's State Oceanic Administration said that because the hull of the ship had detonated, a large amount of oil in surrounding waters was on fire, according to the official Xinhua news agency.

The administration said it would expand the scope of its monitoring and "quickly ascertain the spread and drift of overflowing oil" from the wrecked ship.

A Chinese salvage team on Saturday recovered two bodies from the tanker. Another body, presumed to be one of the Sanchi's sailors, was found on Monday and brought to Shanghai for identification.

The Sanchi's crew consisted of 30 Iranians and two Bangladeshis.

Iranian officials said the remaining 29 crew members and passengers of the tanker were presumed dead. Iranian President Hassan Rouhani sent messages of condolence to the families of the crew and called for an investigation into the accident, Iranian state media reported.

Chinese Foreign Minister Wang Yi earlier told his Iranian counterpart Mohammad Javad Zarif by telephone that "as long as there is one per cent of hope, China will continue to make 100 per cent effort" to rescue and recover the crew.

The tanker, owned by National Iranian Tanker Co., was carrying almost one million barrels of condensate, an ultra-light crude oil, to South Korea.

It collided with the CF Crystal, which was carrying grain from the United States, about 160 nautical miles (184 kilometres) off China's coast near Shanghai.​