Tens of thousands of Iranians took part in pro-government demonstrations in several cities across the country on Wednesday, Iranian state media reported.

Rallies take place after 6 days of protests against president, clerics

Tens of thousands of Iranians took part in pro-government demonstrations in several cities across the country on Wednesday, Iranian state media reported.

The state-sponsored show of force comes after six days of street unrest that has shaken the clerical leadership and left 21 people dead.

While the rallies showed support among Iran's 80 million people for its clerically overseen government, smaller and smaller towns in the Iranian countryside appear to be experiencing the unrest that has already swept through urban areas, according to protesters' online videos.

Official and semi-official media did not immediately offer new details of the unrest Wednesday. Demonstrators' videos corresponded with The Associated Press reporting from outside of Iran, though individual protesters themselves remain unreachable. The protests for now also appear to remain leaderless.

The protests, the largest seen in Iran since its disputed 2009 presidential election, began on Dec. 28 in Mashhad, Iran's second-largest city and a bastion for hard-liners. While initially focusing on Iran's flagging economy and rising food prices, they've morphed into demands for wholesale change in Iran's theocratic government.

The U.S. administration has been vocal about its support for the rights of Iranian protesters, with President Donald Trump adding a more cryptic note about American "support" on Twitter early Wednesday.

"Such respect for the people of Iran as they try to take back their corrupt government. You will see great support from the United States at the appropriate time!" Trump tweeted. 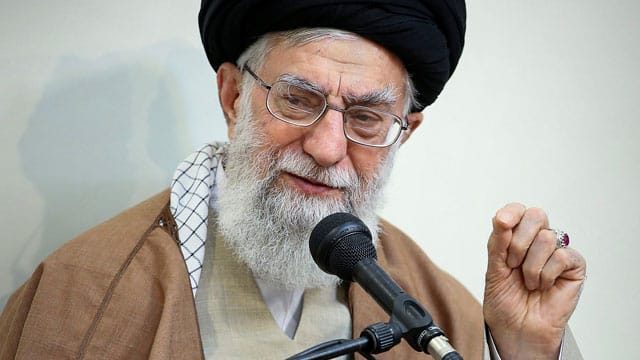 3 years agoVideo
5:09
Iran's Supreme Leader Ayatollah Ali Khamenei says Iran's enemies are to blame for the violence that has taken over the country. Twenty-two people have now died following days of anti-government protests. In his first comments since the protests began, Khamenei said, "enemies of Iran utilized various means — including money, weapons, politics and intelligence apparatuses — to create problems for the Islamic system." 5:09

On Wednesday, state TV reported that demonstrations took place in dozens of cities and towns, including Ahvaz, the capital of the oil-rich province of Khuzestan, the Kurdish town of Kermanshah in the country's west and Qom, the religions capital of Shia Islam in Iran.

Demonstrators carried preprinted signs and Iranian flags, with state TV offering a swooping helicopter shot in Ahvaz to show their scale. Ahvaz and the wider Khuzestan province is home to many ethnic Arabs and has seen unrest amid the protests.

In Qom, state TV cameras focused on the Shia clerics taking part, many wearing the black turbans identifying them as direct descendants of the Prophet Muhammad.

'Answer to the protests'

The English-language Press TV broadcast Wednesday's pro-government rallies live, saying they sought to "protest the violence that has taken place over the last few nights in cities." State TV said in Farsi that the demonstrations served as an "answer to the protests" by "servants of the U.S." as the pro-government demonstrators called the protesters.

The rallies come after Iran's Supreme Leader Ayatollah Ali Khamenei on Tuesday blamed days of protests across the country on meddling by "enemies of Iran."

Khamenei avoided identifying any foreign countries, although he promised to elaborate in the coming days. Undoubtedly high on his list is the United States, where President Donald Trump has tweeted his support for the protests for several days. Some demonstrators carried signs showing Trump's face covered with a bright red "X."

The head of Tehran's Revolutionary Court also reportedly has warned that arrested protesters could potentially face the death penalty.

"Obviously one of their charges can be Moharebeh," or waging war against God, Iran's semi-official Tasnim news agency quoted Mousa Ghazanfarabadi as saying. Moharebeh is punishable by death in Iran.

Later Wednesday, Turkish officials said Iran's President Hassan Rouhani told his Turkish counterpart Recep Tayyip Erdogan that he hopes the protests that have hit Iran "will end in a couple of days." Officials in Erdogan's office said the two had a telephone conversation on Wednesday during which Erdogan stressed the importance of stability and calm.

A statement from Rouhani's office quoted the president as saying: "Iranian police's wise, calming presence in recent limited unrest indicates that we fully trust the security and stability in our country."

However, activist video showed unrest in Noor Abad, in Lorestan province, some 360 kilometres southwest of Tehran.

Demonstrators in the video are seen coming to the aid of another protester, who appears seriously wounded. They later set fire to an ambulance in anger over what they describe as the local hospital's refusal to treat their wounded.

In a statement Wednesday, the UN secretary general and human rights chief each issued calls for restraint.

"The secretary-general ... deplores the loss of life in the protests. He urges respect for the rights to peaceful assembly and freedom of expression, and that any demonstrations take place in a peaceful manner," said Farhan Haq, spokesperson for secretary general Antonio Guterres.

Zeid Ra'ad al-Hussein, UN high commissioner for human rights, said "thorough, independent and impartial investigations of all acts of violence that have taken place" should occur.

He called on Iran's security forces to respond in a manner that is proportionate and fully in line with international law.