A stampede Tuesday at a funeral procession for a top Iranian general killed in a U.S. airstrike last week resulted in the death of at least 56 people and 213 injuries, forcing the postponement of his burial, state-affiliated media reports.

A stampede Tuesday at a funeral procession for a top Iranian general killed in a U.S. airstrike last week resulted in the death of at least 56 people and 213 injuries, forcing the postponement of his burial, state-affiliated media reported.

According to Fars news agency, the stampede took place in Kerman, the hometown of Revolutionary Guard Gen. Qassem Soleimani, as the procession got underway. Initial videos posted online showed people lying lifeless on a road, others shouting and trying to help them.

"Unfortunately as a result of the stampede, some of our compatriots have been injured and some have been killed during the funeral processions," he said.

ISNA news agency said the burial had been postponed until Tuesday evening local time as a result.

Soleimani's body had been taken to Iraqi and other Iranian cities before arriving in his hometown Kerman for burial, prompting mass outpourings of grief nationwide as the coffin was carried through streets. 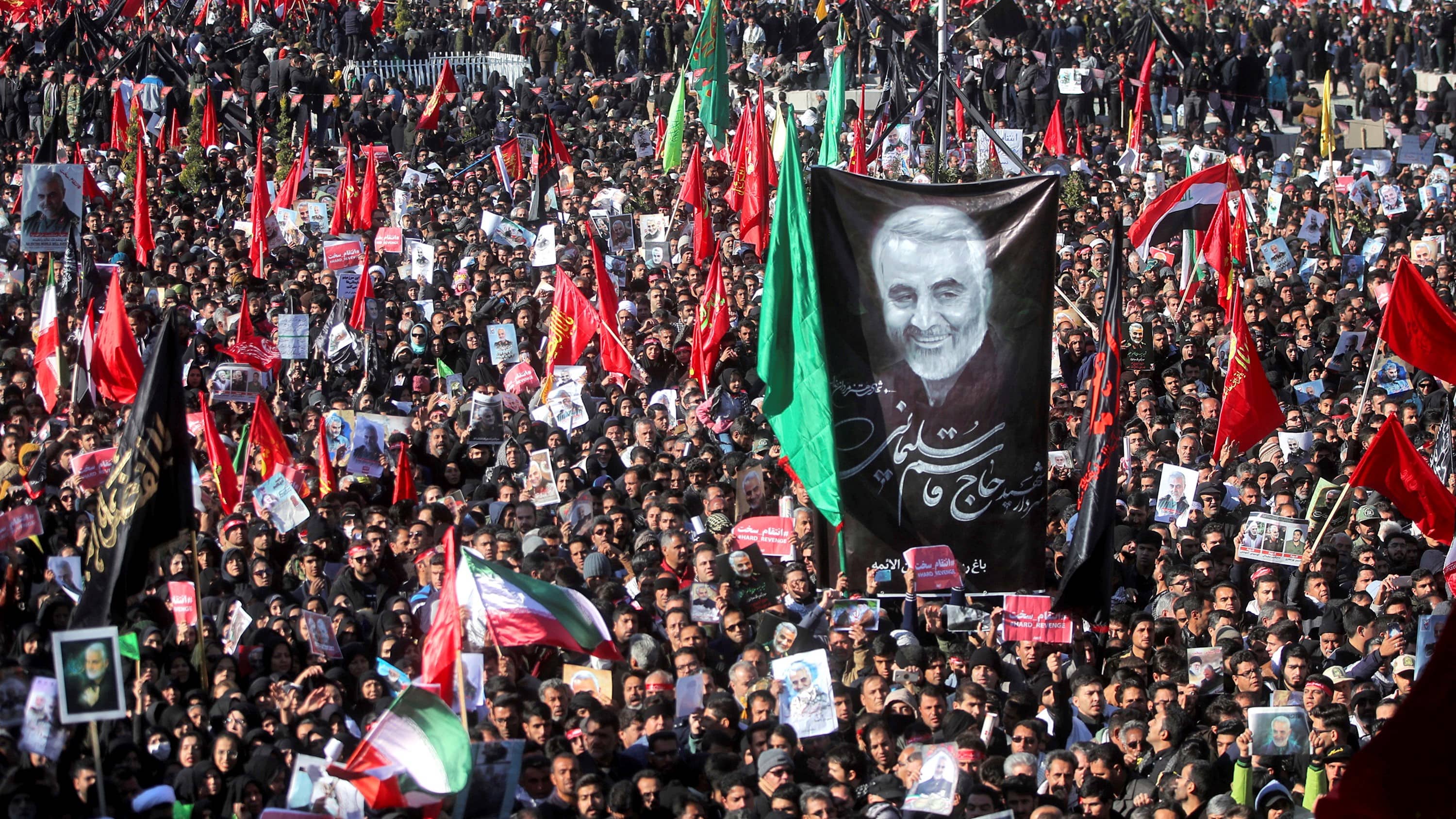 Massive Iranian crowd responds to calls for revenge against U.S.

Earlier, the leader of Iran's Revolutionary Guard threatened on Tuesday to "set ablaze" places supported by the United States over the killing of a top Iranian general in a U.S. airstrike last week, sparking cries from the crowd of "Death to Israel!"

Gen. Hossein Salami made the pledge before a crowd of thousands gathered in a central square in Kerman.

His vow mirrored the demands of top Iranian officials — from Supreme Leader Ayatollah Ali Khamenei to others — as well as mourners across the Islamic Republic, demanding retaliation against America for a slaying that's drastically raised tensions across the Middle East.

Mourners in Kerman dressed in black carried posters bearing the image of Soleimani. On Monday, Iran's supreme leader wept over his casket as a crowd, said by police to be in the millions, filled Tehran. Although there was no independent estimate, aerial footage and Associated Press journalists suggested a turnout of at least one million, and the throngs were visible on satellite images of Tehran taken Monday.

Authorities later brought his remains and those of the others to Iran's holy city of Qom, turning out another massive crowd.

The outpouring of grief was an unprecedented honour for a man viewed by Iranians as a national hero for his work leading the Revolutionary Guard's expeditionary Quds Force.

The U.S. blames him for the killing of American troops in Iraq and accused him of plotting new attacks just before his death Friday in a drone strike at Baghdad's airport.

U.S. Defence Secretary Mark Esper told reporters in Washington Tuesday that those attacks were imminent, but the administration has so far resisted requests to provide evidence this was the case. 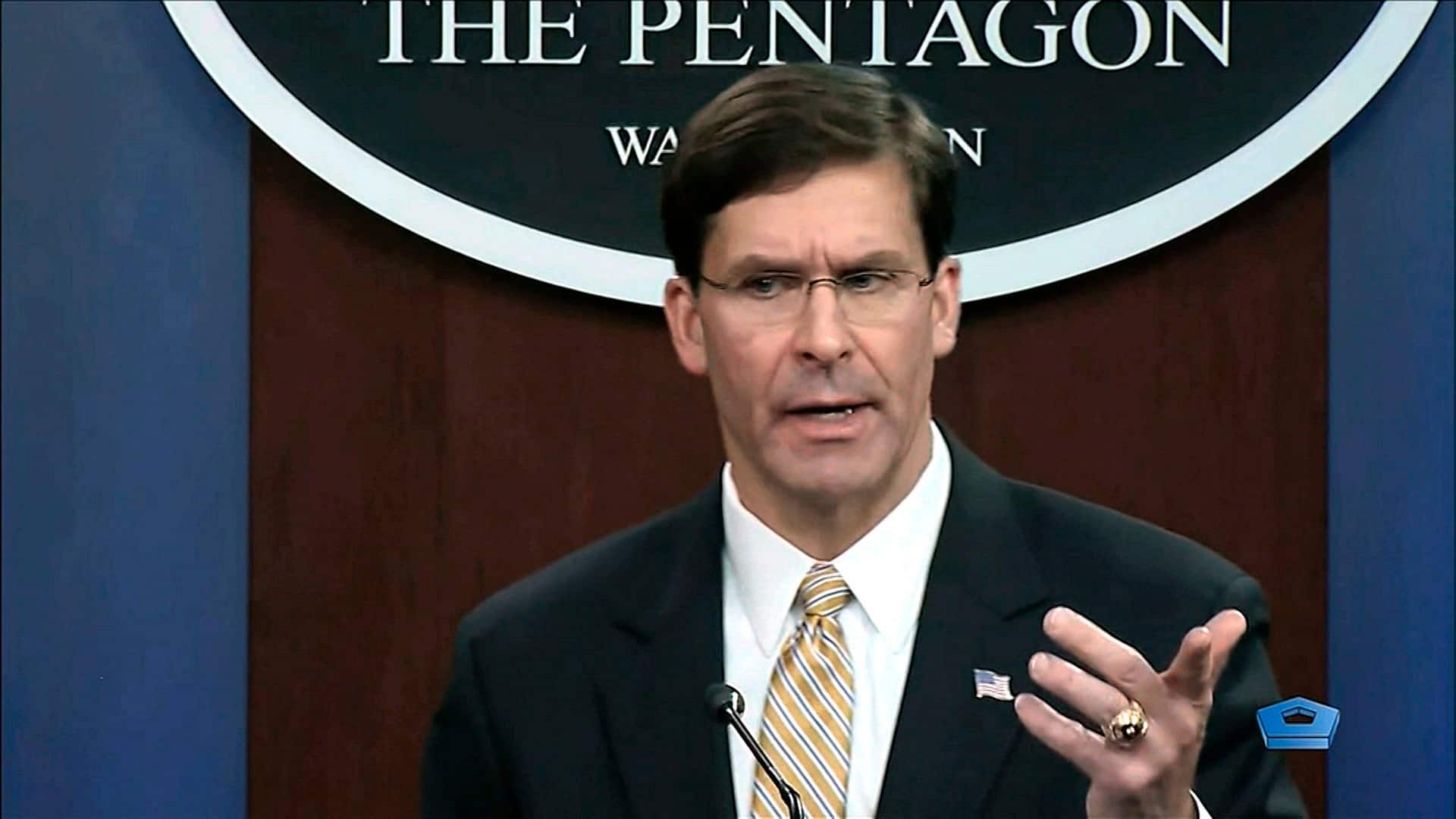 Mark Esper: U.S. is not seeking war with Iran

1 year ago
0:33
U.S. Defence Secretary Mark Esper says there are ways Iran can de-escalate the tensions between the two countries. 0:33

Esper also said that the U.S. should expect that Iran will retaliate.

"We're prepared for any contingency," Esper said. "And then we will respond appropriately to whatever they do."

Soleimani also led forces in Syria backing President Bashar al-Assad in a long war, as well as served as the point man for Iranian proxies in countries like Iraq, Lebanon and Yemen. 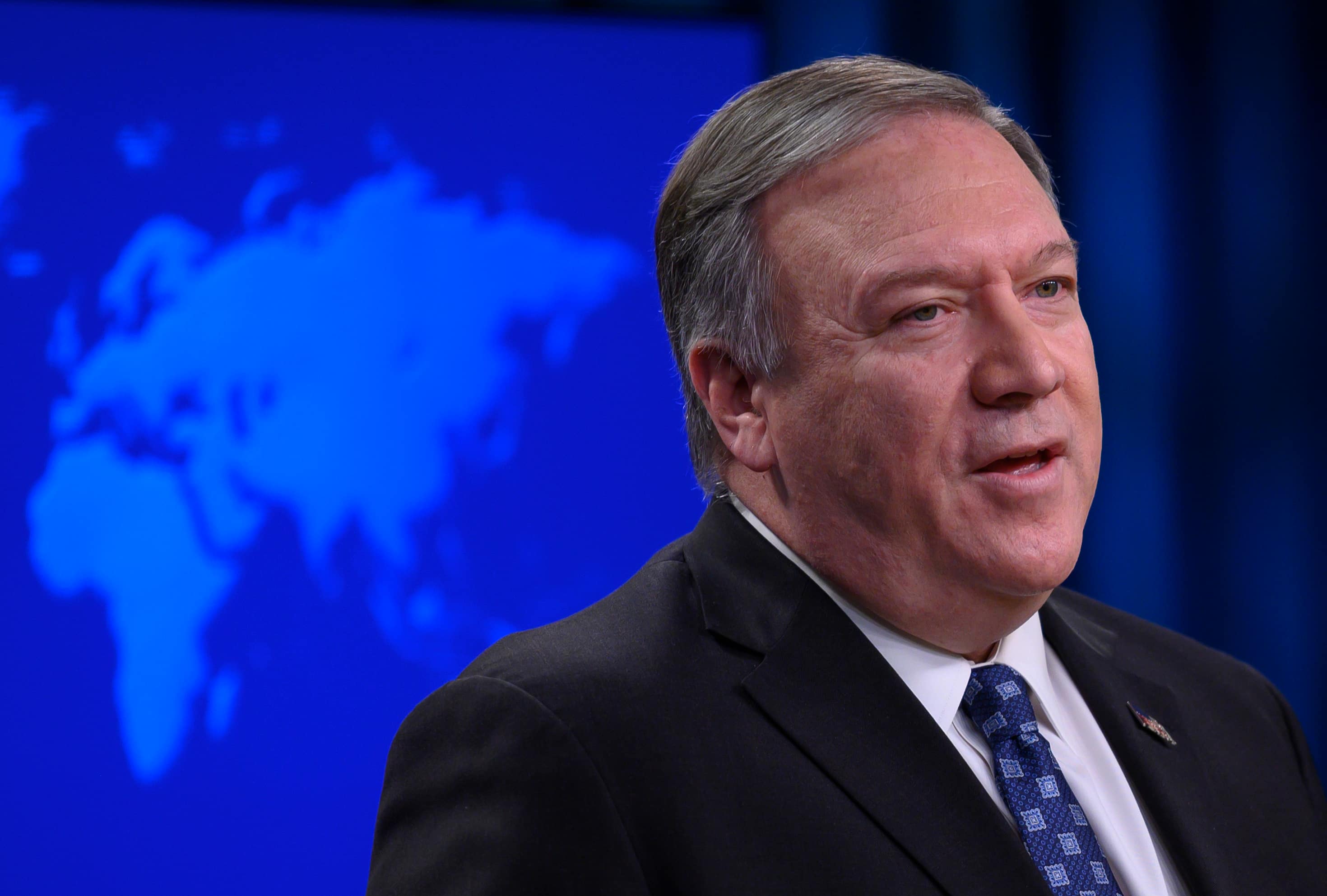 1 year ago
2:29
U.S. Secretary of State Mike Pompeo on Tuesday said Soleimani was not in Baghdad pursuing a peaceful diplomatic mission when the U.S. killed him. 2:29

U.S. Secretary of State Mike Pompeo on Tuesday said Soleimani was not in Baghdad pursuing a peaceful diplomatic mission when the U.S. killed him.

"Is there any history that would indicate that it was remotely possible that this kind gentleman, this diplomat of great order — Qassem Soleimani — had traveled to Baghdad for the idea of conducting a peace mission?" Pompeo said to reporters.

"We know that wasn't true."

The United States was founded on tolerance. We have great respect for Persian history and its symbols, like Persepolis, Naqsh-e Jahan Square, and the Tomb of Cyrus. <a href="https://twitter.com/khamenei_ir?ref_src=twsrc%5Etfw">@khamenei_ir</a>’s corrupt regime should listen to the people of <a href="https://twitter.com/hashtag/Iran?src=hash&amp;ref_src=twsrc%5Etfw">#Iran</a>. They want their culture and their country back.

Pompeo also held Soleimani responsible for a Dec. 27 rocket attack in Iraq in which a U.S. civilian contractor was killed.

"He was continuing the terror campaign in the region. We know what happened … in December, ultimately leading to the death of an American. So, if you are looking for imminence, you need look no further than the days that led up to the strike that was taken against Soleimani," Pompeo said.

Soleimani's slaying already has pushed Tehran to abandon the remaining limits of its 2015 nuclear deal with world powers as his successor and others vow to take revenge.

In Baghdad, parliament has called for the expulsion of all American troops from Iraqi soil, something analysts fear could allow ISIS militants to mount a comeback.

Officials brought Soleimani's remains and others killed in the airstrike to a central square in the city of Kerman, a desert city surrounded by mountains that dates back to the days of the Silk Road. He'll be buried in his hometown later Tuesday.

Salami praised Soleimani's exploits and said that as a martyr, he represented an even greater threat to Iran's enemies.

In other developments on Tuesday, the killing of Soleimani by the U.S. was an act of "state terrorism" and Iran will respond proportionately, Iranian Foreign Minister Mohammad Javad Zarif said in an interview with CNN that aired on Tuesday. 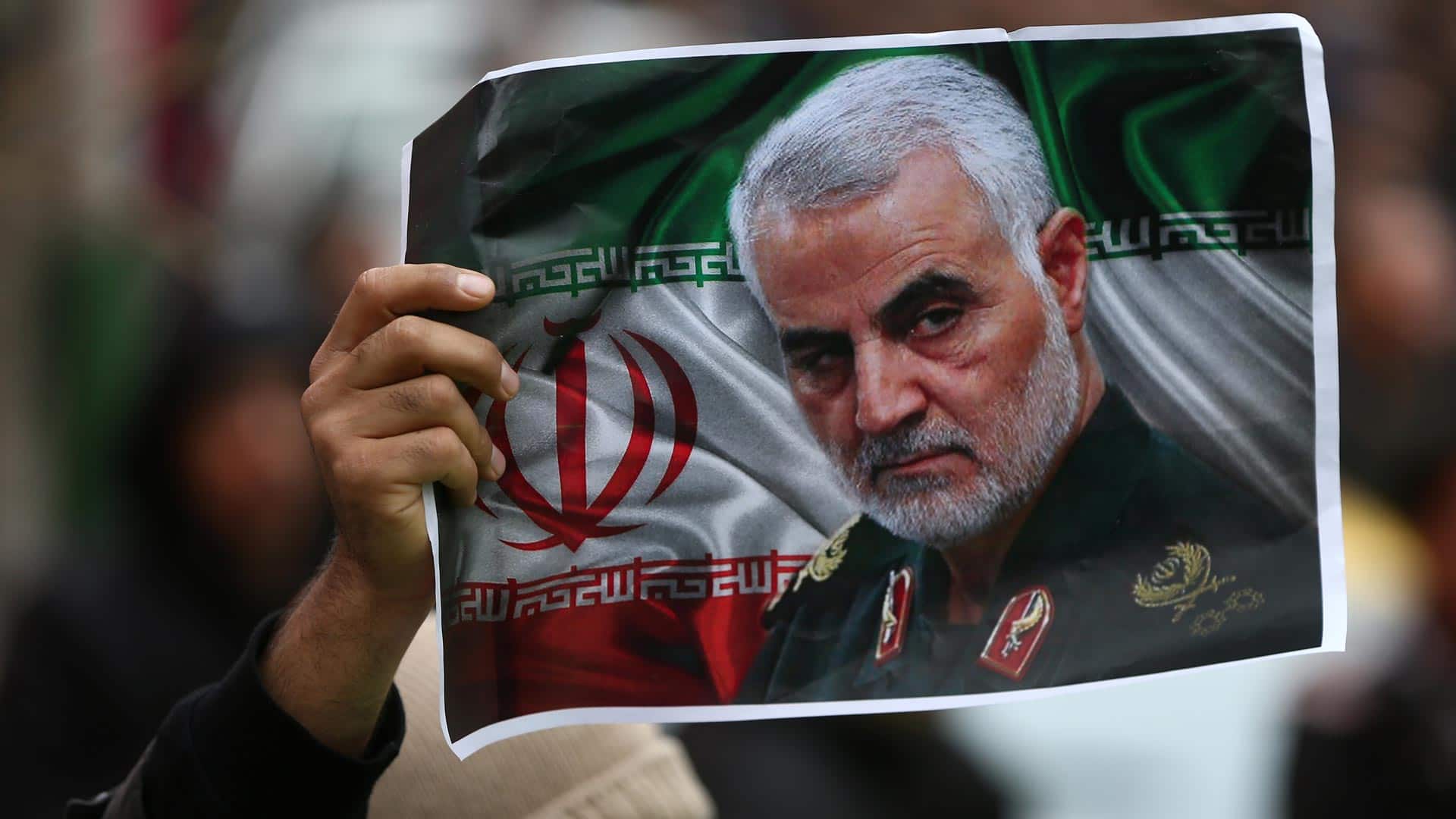 1 year ago
7:45
U.S. President Donald Trump is defending the decision to kill a top Iranian general while others are examining the consequences. We also look at whether threats to attack Iran’s cultural sites would be legal. 7:45

In Washington, the U.S. defence secretary denied reports the U.S. military was preparing to withdraw from Iraq, where Tehran has vied with Washington for influence over nearly two decades of war and unrest.

"We will take revenge, a hard and definitive revenge," Salami told the crowds of mourners in Kerman prior to the stampede.

Ali Shamkhani, secretary of the Supreme National Security Council, said 13 "revenge scenarios" were being considered, Fars news agency reported. Even the weakest option would prove "a historic nightmare for the Americans," he said.

Iran, its southern coast stretching along a Gulf oil shipping route that includes the narrow Strait of Hormuz, has allied forces across the Middle East through which it could act. Representatives from those groups, including the Palestinian group Hamas and Lebanon's Hezbollah movement, attended the funeral events in Tehran.

Despite its strident rhetoric, analysts say Iran will seek to avoid any conventional conflict with the U.S., instead opting for asymmetric strikes such as sabotage or other more limited military actions.

Reuters and other media reported on Monday that the U.S. military had sent a letter to Iraqi officials informing them U.S. troops were preparing to leave.

"In order to conduct this task, Coalition Forces are required to take certain measures to ensure that the movement out of Iraq is conducted in a safe and efficient manner," it said.

However, Esper said there had been no decision whatsoever to leave Iraq. "I don't know what that letter is."

U.S. army Gen. Mark Milley, chair of the Joint Chiefs of Staff, said the letter was a "poorly worded" draft document meant only to underscore increased movement by U.S. forces.

About 5,000 U.S. troops are still in Iraq, where there has been a U.S. military presence since Saddam Hussein was toppled in a 2003 invasion.

Israel distances self from U.S.

As tensions between the U.S. and Iran flared, Israel sought on Tuesday to stand aside from the conflict, and said it was unclear whether Tehran's abandonment of uranium enrichment limits meant it was on a path toward a nuclear weapon.

The unusually muted Israeli comments on Iran, Israel's arch-enemy, emerged after Prime Minister Benjamin Netanyahu's security cabinet met on Monday amid concern over Iranian retaliation for the U.S. strike in Baghdad on Friday.

Asked on Israel Radio whether Iran was "on the way to an atomic bomb," Energy Minister Yuval Steinitz, one of Netanyahu's closest lieutenants and a member of the security cabinet, said: "It's too early to say."

Iran, which has denied seeking to build nuclear arms, said on Sunday it would abandon limitations on enriching uranium, which can be used to make nuclear warheads.

Iran had already breached many of the restrictions of a deal with world powers designed to curb its nuclear program, agreed to in 2015, which Trump abandoned in 2018.

Asked what action Israel should take now, Steinitz said "there is tension between Iran and the United States and we're not involved, so I don't want to relate to it. We're standing on the sidelines and observing events."

Netanyahu has long said the nuclear deal would not prevent Tehran getting the bomb, and has in the past held out the option of a unilateral strike against Iran to prevent this.

But he largely stepped away publicly from that line after the nuclear deal was signed, focusing instead on pushing for the agreement to be scrapped and sanctions restored.

Any conflict now would stretch Israel at a time when it is deep in political stalemate after inconclusive elections in April and September, with a new vote due on March 2.

Another close U.S. ally Britain on Tuesday called for calm after said a war with Iran would only benefit Islamist militants across the Middle East.

"What we're looking to do is to de-escalate the tensions with Iran and make sure in relation to Iraq that we don't lose the hard-won gains that we secured against Daesh [ISIS]," British Foreign Secretary Dominic Raab said.

"We are concerned that if we see a full-blown war, it would be very damaging and actually the terrorists, in particular Daesh, would be the only winners."