Iran says it is reserving judgment on new U.S. President Donald Trump. But if he does, as he’s vowed, “tear up” the international deal Tehran reached on curbing its nuclear program, it could quickly ramp that program back up, says the country’s atomic energy chief.

Iran says it is reserving judgment on new U.S. President Donald Trump. But if he does, as he's vowed, "tear up" the international deal Tehran reached on curbing its nuclear program, it could quickly ramp that program back up, says the country's atomic energy chief.

In the first comments on Trump's inauguration from a high-ranking member of Iran's government, Ali Akbar Salehi, who is also a vice-president, said he viewed the absence of a mention of Iran in Trump's inaugural speech as "positive."

But in an interview with CBC News in Iran he also dismissed the new U.S. administration's intention to develop a "state of the art" missile defence system to stave off attacks from North Korea and Iran.

That intention was announced yesterday on the White House website, within minutes of Trump's inauguration.

"The United States — it's more than 10,000 miles [16,000 kilometres] away from Iran, and we have never intended to manufacture missiles that would go that far," he said. 4 years ago
0:42
We will wait and see,' Ali Akbar Salehi says after watching the new U.S. president’s speech, which did not mention Iran 0:42

It is a "politicized" decision that is "against all rationality," he added.

But the nuclear deal is Iran's central concern. Iran has watched warily as Trump repeatedly cast doubt on the deal, under which tough sanctions were lifted a year ago this month.

The unprecedented agreement in 2015 brought together Iran with the U.S., Russia, China, Britain, France and Germany in a rare show of international consensus.

In the dying days of his presidency, Barack Obama insisted the deal brought "significant, concrete results in making the United States and the world a safer place."

Echoing critics who say Iran cannot be trusted — and is ultimately after a military nuclear program — Trump has called the deal the worst ever made and, during his campaign, he promised to tear it up.

Last week, he was more vague about his plans, but insisted the deal was still "one of the dumbest" he'd ever seen.

Salihi is a key architect of the deal that Trump wants to tear up, and if that happens, Iran will "act appropriately," he said.

"We did once before … that deal didn't work and Iran was able to go back to its nuclear activities with high speed," he said.

"We can very easily snap back and go back … not only to where we were, but a much higher position technologically speaking." 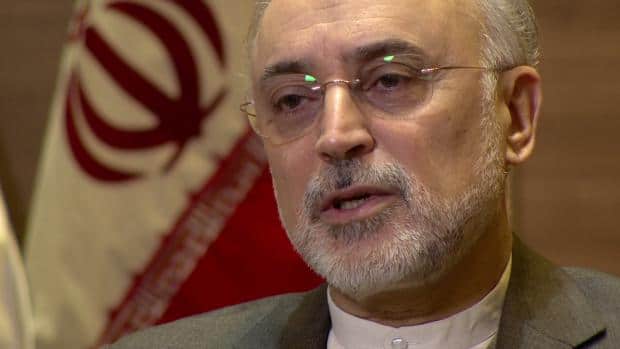 'We don’t want to see that day, but we are prepared'

4 years ago
0:37
Ali Akbar Salehi, head of Iran’s Atomic Energy Organization, says his country could quickly ramp up its curbed nuclear program if Trump were to tear up international deal currently in place. 0:37

Salehi says he watched the inauguration with the expectation that Trump would mention Iran or its nuclear deal. But he did not raise either.

The nuclear deal is also the subject of heated discussion in Iran — especially as the country heads toward its own presidential election this spring.

Critics at home have called out the government for lower-than-expected economic dividends for ordinary Iranians.

Hardliners have also pointed to Trump's comments as proof of the dangers of dealing with the U.S. — and of their belief that Washington cannot be trusted — no matter who leads it.