Iran has kept its promise to adopt nuclear measures required under an international deal struck six months ago, paving the way for many crippling sanctions on the Islamic Republic to be lifted immediately.

Iran can now recoup $100B US in assets frozen overseas 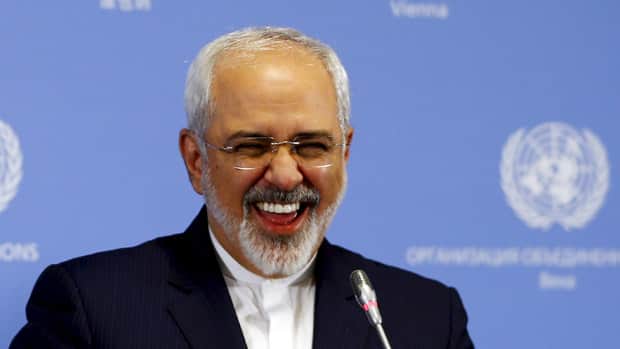 Iran has kept its promise to adopt nuclear measures required under an international deal struck six months ago, paving the way for many crippling sanctions on the Islamic Republic to be lifted immediately.

"As Iran has fulfilled its commitments, sanctions related to Iran's nuclear program are lifted in accordance with the JCPOA [Joint Comprehensive Plan of Action]," she said.

She added that all sides are convinced that the deal is strong and fair.

"To get to this point ... Iran has undertaken significant steps, that many — and I do mean many — people doubted would ever come to pass," he said, speaking in Vienna.

"In return, for the steps that Iran has taken, the United States and the EU will immediately lift nuclear-related sanctions," he said.

Kerry said that before negotiations began, Iran was adding to its stockpile of enriched uranium. He said the country has now reduced that stockpile to less than 300 kg, shipping it to Russia where it will be processed.

Today marks the moment the <a href="https://twitter.com/hashtag/IranDeal?src=hash">#IranDeal</a> has transitioned from ambitious promises on paper to measurable actions in practice.

"That means that their current level of enriched uranium is two per cent of what it was before we completed the agreement, and the rest is shipped out of the country," said Kerry.

He added that Iran has dismantled some of its nuclear reactors that had the potential to produce fuel for nuclear weapons.

"They have modified the entire reactor so it will only be used for peaceful purposes," he said.

Earlier, Iran freed four Americans including Washington Post reporter Jason Rezaian in a prisoner swap, as diplomats gathered to announce the lifting of international sanctions and bring the country of 80 million people back to the global economic stage.

The four held in Iran include bureau chief Rezaian, held since 2014 and convicted in Iran of espionage. Rezaian's case in particular has been a notable obstacle to a thaw in Iranian-U.S. relations.

The Iranian state news agency reported the Americans were swapped for seven Iranians who were in U.S. jails for violating sanctions. Other Iranians were pardoned by U.S. President Barack Obama, and arrest notices for more Iranians were lifted.

Here's what has happened so far:

Zarif and Kerry, who developed a strong rapport while hammering out last year's deal, met in a Vienna hotel before the announcement.

"Implementation day" of the nuclear deal marks the biggest re-entry of a former pariah state into world commerce since the end of the Cold War.

It is also a turning point in the hostility between Iran and the United States that has shaped the Middle East since Iran's Islamic Revolution of 1979, and a defining initiative for both U.S. President Barack Obama and Iranian President Hassan Rouhani.

The sanctions have cut Iran off from the global financial system, drastically reduced the exports of a major oil producer and imposed severe economic hardship on ordinary Iranians. Most will be lifted immediately.

Even before the expected announcement that sanctions would be lifted, Iran's Mehr news agency reported on Saturday that executives from two of the world's largest oil companies, Shell and Total, had arrived in Tehran for talks with state firms.

The deal is opposed by all of the Republican candidates vying to succeed Obama as president in an election in November, and is viewed with deep suspicion by U.S. allies in the Middle East including Israel and Saudi Arabia.

For Iran, it marks a crowning achievement for Rouhani, a pragmatic cleric elected in 2013 in a landslide on a promise to reduce Iran's international isolation. He was granted the authority to negotiate the deal by Supreme Leader Ayatollah Ali Khamenei, an arch-conservative in power since 1989.

Zarif, a U.S.-educated fluent English speaker, has emerged as the cheerful face of Iran's diplomacy, developing a close rapport with Kerry in unprecedented one-on-one talks. Zarif has chipped away at Iran's image as a pariah state, to the dismay of hardliners in Tehran as well as regional rivals.

with files from CBC and the Associated Press