The devastation caused by Hurricane Iota became clearer Wednesday as images emerged showing piles of wind-tossed lumber that used to be homes and concrete walls that were pounded into pieces by the second Category 4 storm to blast Nicaragua's Caribbean coast in two weeks.

Storm has broken up over El Salvador, but torrential rains remain a threat 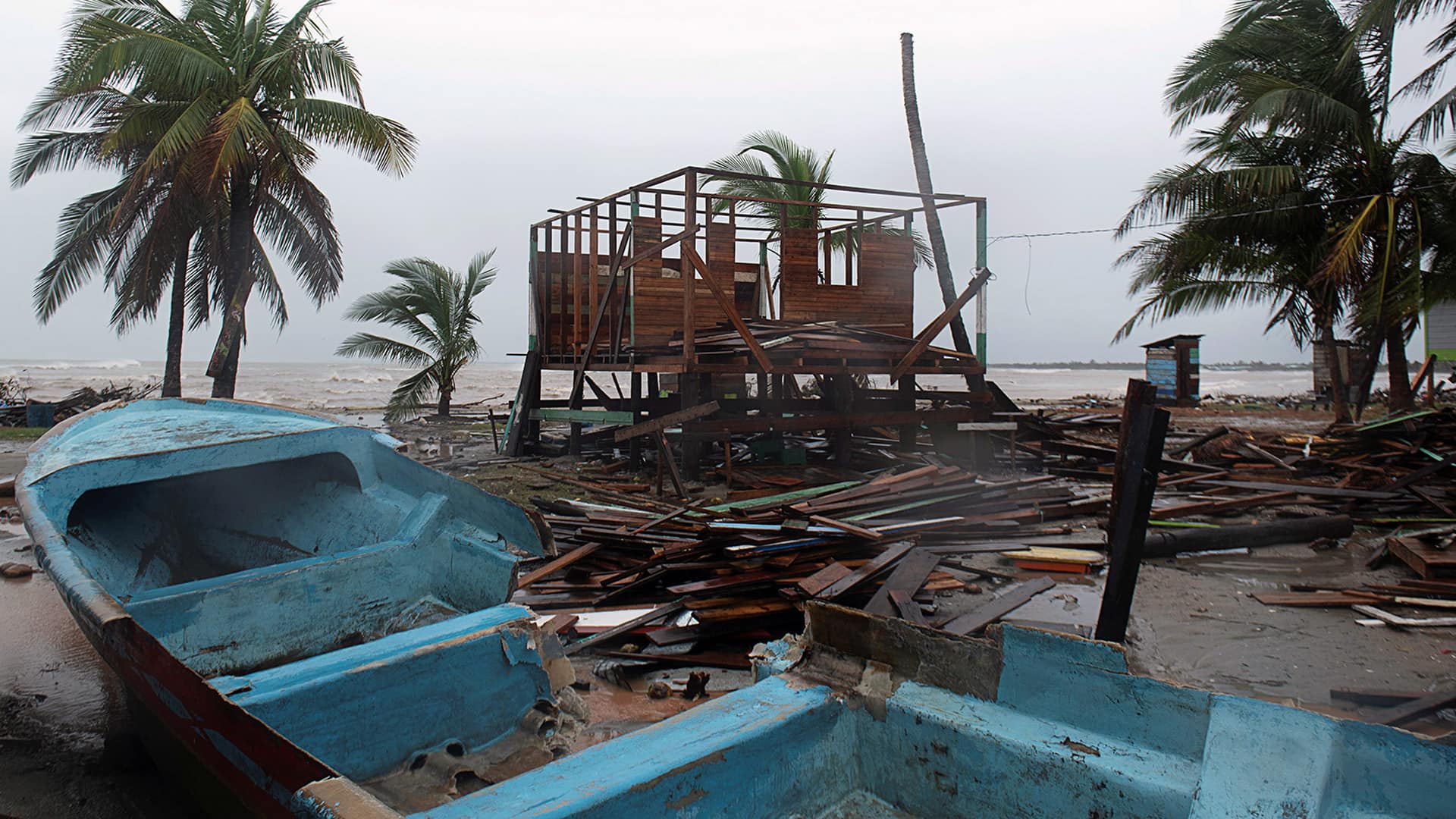 2 months agoVideo
2:01
Hurricane Iota is slamming Central America, just days after Hurricane Eta came crashing through as a Category 4 storm. Iota made landfall with winds as high as 250 kilometres per hour as it hit Nicaragua. 2:01

The devastation caused by Hurricane Iota became clearer Wednesday as images emerged showing piles of wind-tossed lumber that used to be homes and concrete walls that were pounded into pieces by the second Category 4 storm to blast Nicaragua's Caribbean coast in two weeks.

Nicaragua Vice-President and first lady Rosario Murillo on Wednesday raised the nation's death toll to 16. The victims were spread across the country, swept away by swollen rivers or buried in landslides.

Iota struck Monday evening as a Category 4 hurricane with winds of 250 km/h, very close to the force and location of Hurricane Eta two weeks earlier. By early Wednesday, Iota had been weakened by its passage over Central America and dissipated over El Salvador, where winds of 45 km/h were recorded.

Rescuers searched at the site of a landslide in northern Nicaragua, where the local government confirmed four deaths and neighbours spoke of at least 16.

A short video from the nation's emergency management agency showed a massive bowl-shaped mountainside shrouded in clouds that collapsed. Police blocked media access to the site on the Macizo de Penas Blancas, a mountain in Matagalpa province, about 130 kilometres north of Managua. But Iota's torrential rains remained a threat.

There were seven confirmed dead at the mountain, and the search continued, Murillo said.

Miguel Rodriguez, who works on a ranch next to the site, said he saw at least seven bodies.

"The landslide came with all the dirt, and it became like a river going down. It took all of the little houses that were there. There were five homes, five families," Rodriguez said.

Nicaragua's army said it was sending 100 rescuers to the site. Access was complicated by downed trees blocking roads.

A distraught Filimon Wilfred, 72, said Iota had destroyed his family's five houses leaving its 18 members homeless in the coastal city of Bilwi.

'We are in danger if it keeps raining'

Iota battered Nicaragua's Caribbean coast and flooded stretches of neighbouring Honduras that were still under water from Eta.

The storm's centre passed just south of Tegucigalpa, the mountainous capital of Honduras, where residents of low-lying, flood-prone areas were evacuated, as were residents of hillside neighbourhoods vulnerable to landslides.

"What affected us most here was the flooding. The Barra Patuca sector has been flooded for the last two weeks," said Teonela Paisano Wood, mayor of the Honduran town of Brus Laguna. "We are in danger if it keeps raining."

Mirna Wood, vice-president of the Miskito ethnic group in Honduras's far eastern Gracias a Dios region, was in Tegucigalpa collecting donations for her community ravaged by Eta when Iota hit.

Some 40,000 people in the area had moved to shelters from low-lying land beside rivers and the sea, but others remained stranded near the border with Nicaragua. Some were rescued by Nicaraguan authorities, she said.

"We are facing an incredible emergency," Wood said. "There is no food. There is no water."

Panama reported that one person was killed and another missing in its western Indigenous autonomous Ngabe Bugle area near the border with Costa Rica.

Eta caused more than 130 deaths as it triggered flash floods and mudslides in parts of Central America and Mexico. It left tens of thousands homeless in Honduras, which reported 74 deaths and nearly 57,000 people in shelters, mostly in the north.

Before hitting Nicaragua, Iota blew over the tiny Colombian island of Providencia, where Colombian President Ivan Duque said one person was killed and 98 per cent of the island's infrastructure was "affected."