Indonesian rescue teams on Wednesday struggled to reach remote areas on the western coast of Java amid an "extreme weather" rain warning after a tsunami killed more than 400 people last week.

Confirmed death toll from last week's tsunami is 430, with at least 159 people missing

Indonesian rescue teams on Wednesday struggled to reach remote areas on the western coast of Java amid an "extreme weather" rain warning after a tsunami killed more than 400 people last week.

Heavy rain lashed fishing villages along the coast, muddying roads and holding up convoys delivering heavy machinery and aid to isolated areas while authorities urged residents to stay away from the shore in case of further waves.

Clouds of ash spewed from the nearby Anak Krakatau, or child of Krakatau, almost obscuring the volcanic island where a crater collapse at high tide on Saturday sent waves up to five metres high smashing into the coast on the Sunda Strait, between Java and Sumatra islands.

"We have developed a monitoring system focused specifically on the volcanic tremors at Anak Krakatau so that we can issue early warnings," said BMKG head Dwikorita Karnawati, adding that a two-kilometre exclusion zone had been imposed. 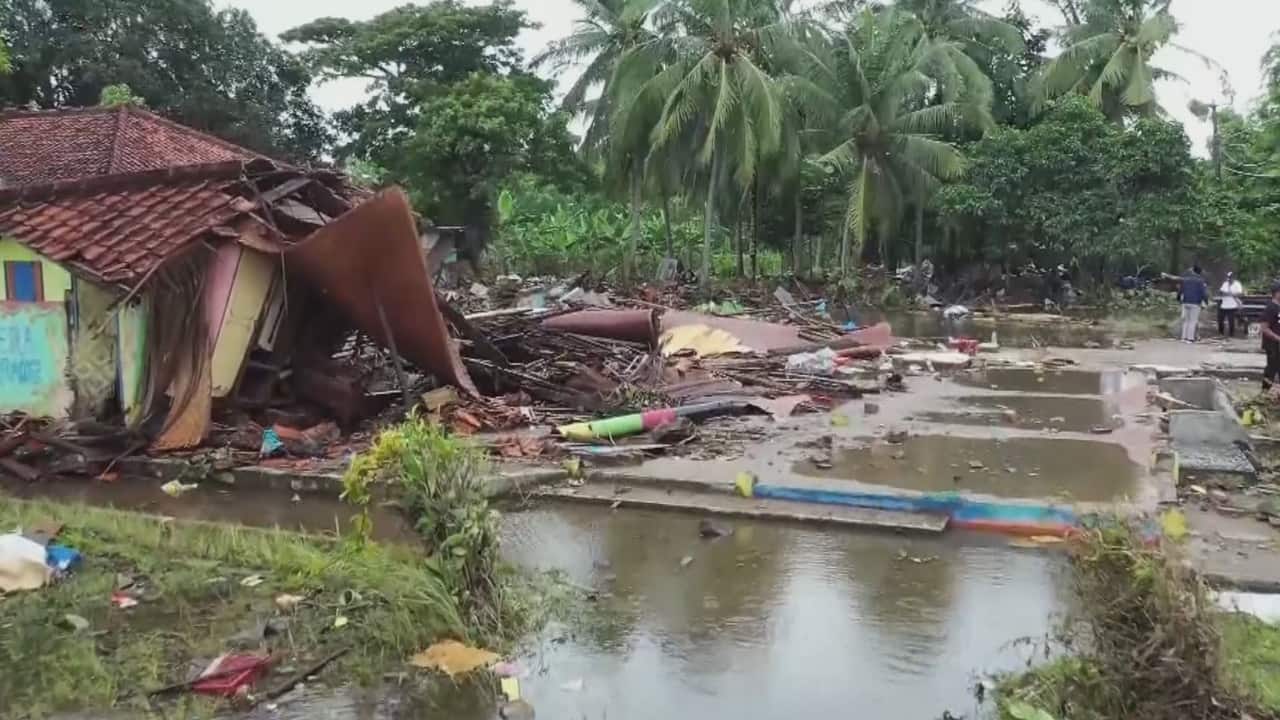 2 years ago
2:11
Indonesian rescue teams struggle to reach remote areas on the western coast of Java amid an "extreme weather" rain warning after a tsunami killed more than 400 people last week. 2:11

The confirmed death toll is 430, with at least 159 people missing. Nearly 1,500 people were injured and over 21,000 people have evacuated to higher ground.

A state of emergency has been declared until Jan. 4, which authorities hope will make it easier to deploy assistance, said Sutopo Purwo Nugroho, spokesperson for the national disaster mitigation agency.

Search and rescue teams were focused on the town of Sumur near the southwest tip of Java, but "the roads are damaged and clogged" and helicopters had to be deployed to carry out assessments and evacuations, he added.

Volunteers were having to piece together makeshift bridges out of concrete blocks after the waves washed away infrastructure along the coast.

Indonesia is a vast archipelago that sits on the Pacific Ring of Fire. This year, the country has suffered its worst annual death toll from disasters in more than a decade.

The latest disaster, coming during the Christmas season, evoked memories of the Indian Ocean tsunami triggered by an earthquake on Dec. 26, 2004, which killed 226,000 people in 14 countries, including more than 120,000 in Indonesia.

The Saturday evening tsunami followed the collapse of an area of the volcano island of about 64 hectares, or about 90 soccer pitches.

The waves engulfed fishing villages and holiday resorts, leaving a coast littered with the matchwood of homes, crushed vehicles and fallen trees. Children's toys and rides at a seaside carnival in Sumur were left scattered along a swampy beach.

The surge of seawater also left dozens of turtles, weighing several kilograms, stranded on land, and some volunteer rescuers worked to carry them back to the sea.

On Sebesi Island in the middle of the Sunda Strait, helicopters had been dispatched to evacuate residents.

Along the coast, thousands of people are staying in tents and temporary shelters like mosques or schools, with dozens sleeping on the floor or in crowded public facilities. Rice and instant noodles have been delivered to many shelters, but clean water, wet weather gear, fresh clothes, and blankets are in short supply, some evacuees said.

Ade Hasanah, 45, staying in an emergency centre with her children, said people were being told not to return to their homes.

"It's safe here," she said. "We hope if the children are safe and the situation is stable, we can go home quickly. We're restless."

In 1883, the volcano then known as Krakatoa erupted in one of the biggest blasts in recorded history, killing more than 36,000 people in a series of tsunamis and lowering the global surface temperature by one degree Celsius with its ash.

Anak Krakatau is the island that emerged from the area in 1927 and has been growing ever since.