Pakistan's air force shot down two Indian warplanes after they crossed the boundary between the two nuclear-armed rivals in the disputed territory of Kashmir on Wednesday, a military spokesperson said.

Pakistan's military said Wednesday it shot down two Indian warplanes in the disputed region of Kashmir and captured a pilot, raising tensions between the nuclear-armed rivals to a level unseen in the last two decades.

India acknowledged one of its air force planes was "lost" in skirmishes with Pakistan and that its pilot was "missing in action" on a chaotic day, which also saw mortar shells fired by Indian troops from across the frontier dividing the two sectors of Kashmir kill six civilians and wound several others.

A helicopter crash in the region also killed six Indian air force officials and a civilian on the ground.

The aircraft went down Wednesday morning in Kashmir, a mountainous region claimed by both India and Pakistan since almost immediately after their creation in 1947. One of the downed planes crashed in Pakistan's part of Kashmir while the other went down in an Indian-controlled section of the Himalayan region, Pakistan's army spokesperson Maj. Gen. Asif Ghafoor said.

Pakistan's ministry of information and broadcasting released what it says is the wreckage of the Indian planes.

Wreckges of Indian fighter planes burning. Well done Pakistan Air Force. The entire nation is proud of you. <a href="https://t.co/TTIb1zvNZS">pic.twitter.com/TTIb1zvNZS</a>

Pakistani troops on the ground captured an Indian pilot, he later said, after earlier saying it captured two. He did not explain what caused the confusion.

Despite Geneva Convention rules prohibiting the public display of prisoners, the military circulated a video of the Indian pilot, who was recorded saying he was being well treated. He also praised Pakistan's military.

The pilot was injured and was being treated at a military hospital, Ghafoor said. He did not elaborate beyond saying the pilots were being "treated well" and made no mention of them being returned to India.

"We have no intention of escalation, but are fully prepared to do so if forced into that paradigm," Ghafoor said.

'Wars are full of miscalculation'

Tuesday's pre-dawn strike by India was its first inside of Pakistan since the two nations' 1971 war over territory that later became Bangladesh. Pakistan had said that Indian warplanes dropped bombs near the Pakistani town of Balakot but there were no casualties.

The violence Wednesday marked the most serious escalation of the long-simmering conflict since 1999, when Pakistan's military sent a ground force into Indian-controlled Kashmir at Kargil. That year also saw an Indian fighter jet shoot down a Pakistani naval aircraft, killing all 16 on board.

Residents on both sides of the de-facto frontier, the so-called Line of Control, said there were exchanges of fire between the two sides through the night into Wednesday morning. Hundreds of villagers fled border towns in both India and Pakistan.

"History tells us that wars are full of miscalculation. My question is that given the weapons we have, can we afford miscalculation?" Khan said during a brief televised broadcast to the nation. "We should sit down and talk."

There was no reply from Modi.

An Indian foreign ministry spokesperson said Indian planes engaged with the Pakistan aircraft and brought one of them down.

"In this engagement, we have unfortunately lost one MiG 21. The pilot is missing in action. Pakistan has claimed that he is in their custody. We are ascertaining the facts," Raveesh Kumar told reporters.

The clashes prompted widespread concern from the international community.

On his way into question period Wednesday, Canadian Prime Minister Justin Trudeau called the situation a "very serious one."

"This is a conflict that has potential ramifications for billions of people in the region and that's why we're calling for dialogue, for de-escalation," Trudeau said, adding Foreign Minister Chrystia Freeland is engaging with her counterparts. 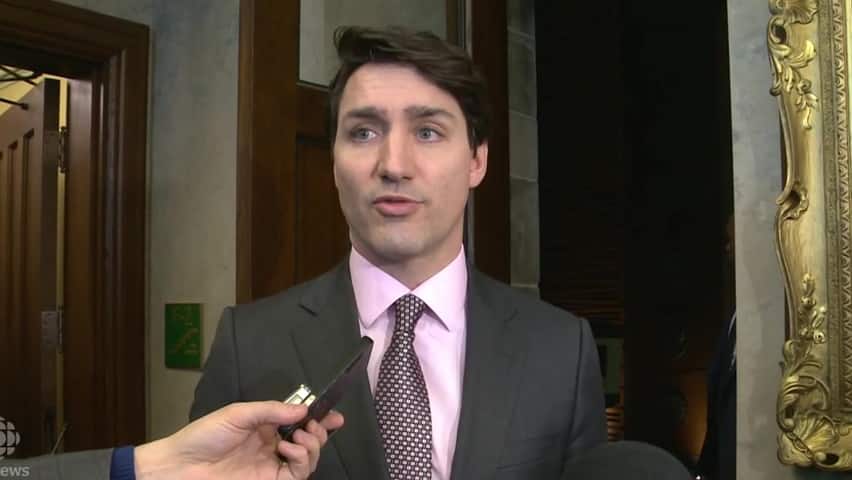 Trudeau worried about rising tensions between India and Pakistan

2 years agoVideo
0:27
PM Justin Trudeau voices his concern over the rising tensions between India and Pakistan as he heads into the House of Commons for Question Period. 0:27

British Foreign Minister Jeremy Hunt said the U.K. government had been "working round the clock" to encourage Pakistan and India to "de-escalate and reduce tensions."

"You have two nuclear powers who have a long history of tension squaring up against each other and now in the start of some kind of military conflict. So it's an extremely dangerous situation."

"I expressed to both ministers that we encourage India and Pakistan to exercise restraint, and avoid escalation at any
cost," Pompeo said in a statement on Wednesday. "I also encouraged both ministers to prioritize direct communication and avoid further military activity."

Both China and the European Union have also called for restraint.

Meanwhile, the hashtag #SayNoToWar emerged on social media, with citizens of both countries calling for peace.

Pakistan's civil aviation authority said it shut Pakistani airspace to all commercial flights on Wednesday, without elaborating or indicating when flights might resume.

Indian news reports said airports in the Indian portion of Kashmir closed for civilian traffic shortly after the air force jet crashed. The Press Trust of India news agency said these airports were located at Srinagar, Jammu and Leh.

Indian administrator Baseer Khan confirmed that the airport in Srinagar, the main city in Indian-controlled Kashmir, was closed and said it was a "temporary and precautionary measure."

Senior police officer Munir Ahmed Khan said the chopper crashed close to an airport on Wednesday in Budgam area, in the outskirts of the region's main city of Srinagar. The Srinagar airport is also an air force station.

Police said they were still going through the wreckage and did not immediately identify the victims.

Eyewitnesses said soldiers fired warning shots into the air to keep residents away from the crash site.

Meanwhile, as the tensions and confrontation escalated between India and Pakistan, authorities asked workers to paint rooftops of hospitals and clinics in red and white with a medical emblem of a cross in Srinagar city.

Meanwhile, the foreign ministry in Islamabad said the country's air force was carrying out airstrikes Wednesday from within Pakistani airspace across the disputed Kashmir boundary but that this was not in "retaliation to continued Indian belligerence."

According to local Pakistani police official Mohammad Altaf, the six fatalities in the Indian shelling earlier on Wednesday included children. The shells hit the village of Kotli in Pakistan's section of Kashmir.

Kashmir is split between Pakistan and India and claimed by both in its entirety. Though Pakistani and Indian troops in Kashmir often trade fire, the latest casualties came a day after tensions escalated sharply following a pre-dawn airstrike and incursion by India that New Delhi said targeted a terrorist training camp in northwestern Pakistan.

The latest wave of tensions between Pakistan and India first erupted after Jaish-e-Mohammad claimed responsibility for the Feb. 14 suicide bombing of a convoy of India's paramilitary forces in the Indian portion of Kashmir that killed 40 Indian troops.

Pakistan has said it was not involved in the attack and was ready to help New Delhi in the investigations.

With files from Reuters, CBC News