A video showing two sisters in northern India hitting back at men who allegedly harassed them on a crowded bus has drawn huge attention in a country where hundreds of thousands of women silently endure sexual harassment daily. 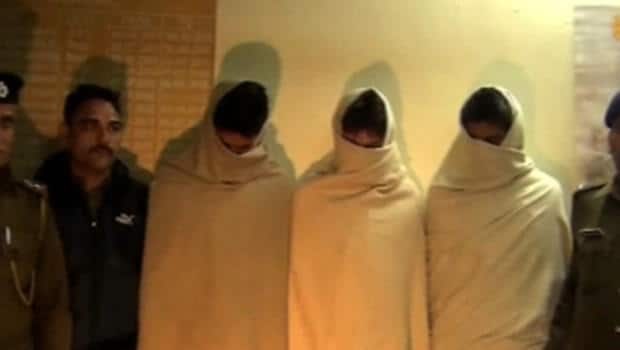 6 years ago
2:36
Two women on a bus are being praised as heroes for fighting off men who have been arrested and charged with assault 2:36

A video showing two sisters in northern India hitting back at men who allegedly harassed them on a crowded bus has drawn huge attention in a country where hundreds of thousands of women silently endure sexual harassment daily.

The video, filmed by a passenger and aired on several television channels Monday, shows the two young women hitting, punching and beating their harassers with a belt, as other passengers silently look on. The women, identified only by their first names, Arati and Pooja, said they lashed out at the men after enduring lewd comments and pawing from them.

"One of the boys started touching my sister and making kissing gestures," Arati told reporters. "I told him to go away or I would teach him a lesson. Then he called another boy saying that we have to beat up two girls. And then the other boy got on the bus."

The sisters said that no one on the bus tried to help them. Instead, other passengers told them to not provoke the men, because they might later attack them or throw acid on them.

Press Trust of India reported that the video was shot Friday as the sisters were on their way to college.

By late Sunday, police in the state of Haryana had arrested three men and were investigating the incident.

As the news of the women's actions spread, Manohar Lal Khattar, Haryana's chief minister, lauded the bravery of the two women and said they would be honoured during India's Republic Day celebration in January.

The video drew a massive response on social media, with many Indians applauding the sisters' bravery, while criticizing the passengers for failing to come to their aid.

"Salute to #RohtakBravehearts who stood against molestation & gave a fitting lesson to culprits. Shameful that none in the bus stood up 4 thm," Naveen Jindal, a federal legislator from Haryana, tweeted.

Sexual violence and harassment faced by Indian women has been the subject of a heated debate in India since the fatal gang rape of a young woman on a moving bus in New Delhi in December 2012.

Hundreds of thousands of ordinary Indians took to the streets in protest after that gruesome attack. The anger pushed the government to overhaul laws to make for more stringent measures to fight attacks against women.