Impeachment outcome is a foregone conclusion, but how Trump's defence tackles Biden could sway voters

Democratic presidential candidate Joe Biden was not central to the brief opening arguments of the defence in the impeachment trial of U.S. President Donald Trump, but he is sure to come up this week. How the defence team paints the former vice-president could prove consequential in the November election.

Democratic presidential candidate Joe Biden was not central to the defence team's brief opening arguments in the Senate trial of U.S. President Donald Trump, but how the lawyers paint the former vice-president's role in the Ukraine affair at the heart of the impeachment process when they resume arguments Monday could prove consequential in the November election.

In their two-hour opening argument Saturday, Trump's legal team tried to undercut the central assertion of the Democrats' impeachment case: that Trump held up $400 million US in military aid in an attempt to exact Ukraine's help in undermining Biden, whom he saw as his likely rival in the 2020 election.

Given that there is no chance the Republican-majority Senate will vote to remove Trump, using the trial to throw shade at Biden might help lighten some of the baggage Trump will be carrying into the electoral race.

They used some of the same witness testimony deployed by the House managers prosecuting the case to suggest that none of the U.S. officials and diplomats testifying had direct knowledge of an explicit quid pro quo between Trump and Ukrainian President Volodymyr Zelensky.

They painted Trump as a reformer concerned about corruption and "burden sharing" — ensuring that other European nations do their fair share to support Ukraine.

But it's questions around Biden and his son Hunter's activities in Ukraine, which on their face have little to do with the underlying articles of impeachment being litigated in the Senate, that could have an impact on the true intended audience of the Senate trial: American voters.

'The intent is to just muddy the waters'

No one is expecting Trump's legal team to reveal anything new about Hunter Biden's 2014 appointment to the board of the Ukrainian energy company Burisma and his father's role in the resignation of the prosecutor-general who was meant to be investigating alleged corruption at the firm.

But it doesn't have to in order for the tactic to benefit Trump.

"They're not going to be able to prove that a crime was committed by Hunter Biden … but the intent is to just muddy the waters," said Bradley Moss, a national security attorney and partner in the D.C. law firm Mark S. Zaid, which represents the whistleblower who first raised concerns about Trump's dealings with Zelensky — although Moss is not involved in that case.

"They don't have to win so much as they just have to throw mud at the scene."

Merely by raising the issue they will have accomplished, in essence, what Trump was asking Zelensky to do on the now infamous July 25, 2019, call: publicly raise questions about Biden's actions in Ukraine, thereby planting seeds of doubt in the minds of voters.

"This is going to be even better. It's now in front of American televisions and tens of millions of people watching." (Actual viewership so far has been closer to eight million). 1 year ago
4:50
Attorney Pam Bondi runs through some of the reactions from media and colleagues to Hunter Biden's appointment to the board of Ukrainian energy company Burisma. 4:50

Not all Republicans on board

The Washington Post has reported that not all Republicans are on board with this strategy.

In the corridors of the Senate and on U.S. cable news networks this past week, several Republicans did raise the prospect of the Bidens testifying. There was even talk of a witness swap at one point — the Bidens for acting White House chief of staff Mick Mulvaney and former national security adviser John Bolton — which Biden and the Democrats shot down.

Sen. Ted Cruz told radio talk show host Hugh Hewitt that he advised the defence team that "nothing matters more than the facts on Burisma" and urged them to "lay out substantive, factual reasons why investigating Burisma, the president had a responsibility to do so."

But others, such as Jim Jordan, a vocal defender of Trump, have urged the defence team to focus on dismantling what he and fellow Republicans see as hearsay evidence; questioning how the Democrats went about conducting the impeachment inquiry; and attacking the character of their star prosecutor, Adam Schiff.

Where Biden is vulnerable

The fact that the Bidens haven't offered much of an explanation in the months since the Burisma case became central in the Trump-Ukraine affair has given air to the innuendo that keeps this issue on the front burner of the Republicans' strategy.

Biden Jr. has said little about how or why he got the appointment beyond having held board positions at Amtrak and the World Food Program USA but said in an ABC News interview that in hindsight it was bad judgment but not an ethical lapse. He hasn't disclosed how much he was paid for the gig, which he left in April 2019.

Biden Sr., for his part, said he and his son never discussed the role and has bristled when asked about the issue. Last week, his 2020 campaign team released a video debunking some of the Burisma-related claims.

While there seems to be little doubt that Biden's push to have prosecutor-general Viktor Shokin removed in 2016 was in line with a U.S. foreign policy supported by European allies with an interest in democratic reform in Ukraine, there's also no question that Hunter Biden's appointment raised eyebrows from the minute it became public in 2014.

Not only were there questions about conflict of interest raised in the U.S. press and in Ukraine at the time, U.S. State Department officials testified at the House impeachment hearings last November that the diplomatic corps, too, was concerned about the appearance of nepotism.

MEDIA: In the House impeachment hearings in November, some witnesses spoke about the Burisma affair: 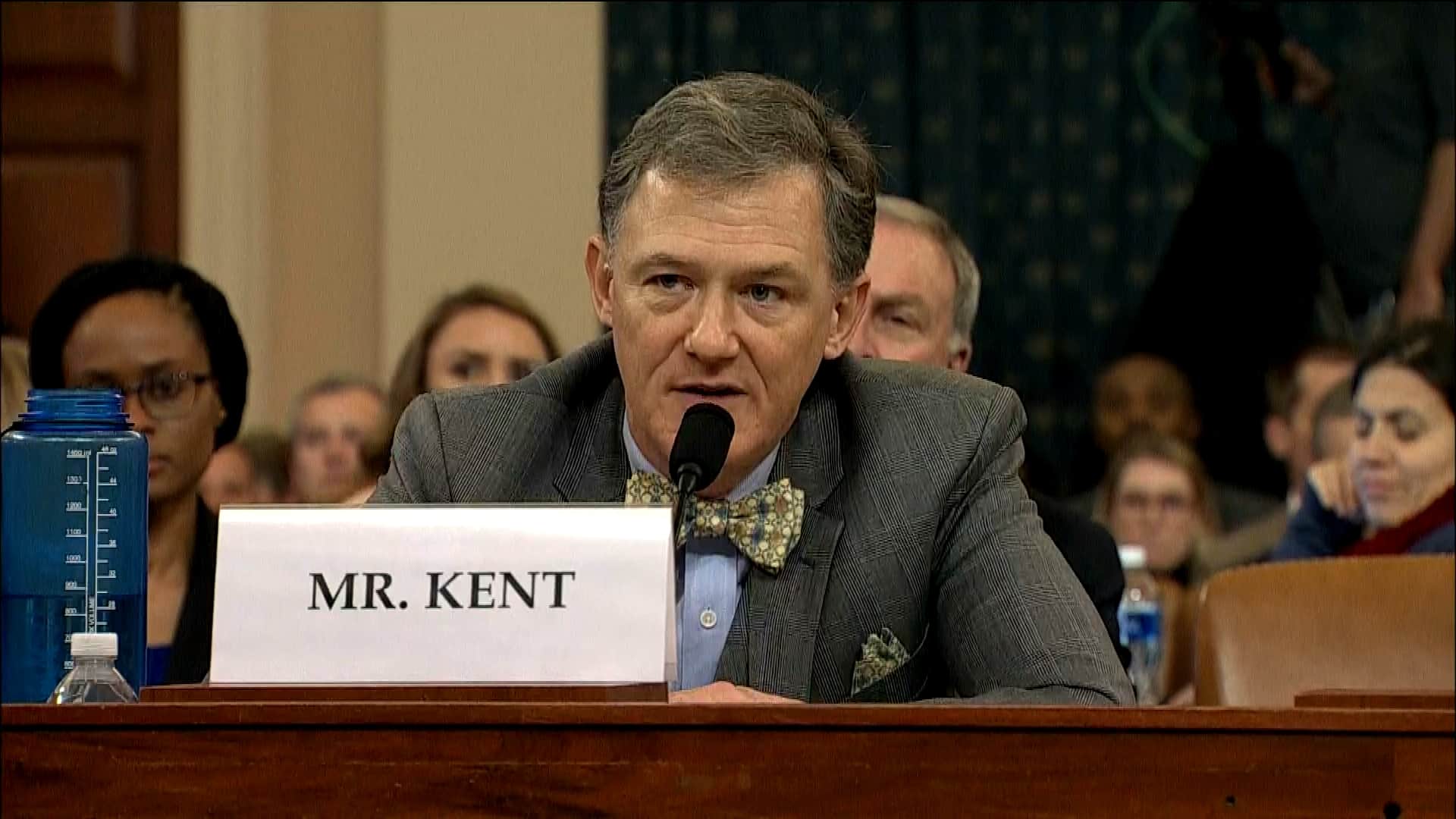 1 year ago
1:04
Testifying to Congress, diplomat George Kent faces a barrage of questions about Hunter Biden's suitability to sit on a board of directors in Ukraine 1:04

The cavalier way Joe Biden boasted in a 2018 public appearance about removing Shokin does him no favours either.

When these and other points come up at the Senate trial, it'll be hard for the House managers arguing the case against Trump to challenge them. Unlike in a criminal trial, there is no rebuttal process per se. There will be a short period set aside for argument, but that only comes after the defence has laid out its case and senators have submitted questions.

"[They] are going to be able to throw this innuendo around and not have to prove any of it," said Bowman. "It's the one point at which you might get an interesting fight over questions of relevance."

Democrats anticipated a Biden-focused attack and used part of their second day of arguments last week to preemptively undermine it. They pointed out that Shokin was not actively investigating Burisma at the time that he was pushed out, and the investigation he was supposed to do concerned allegations of money laundering and tax evasion by Burisma's owner that predated Hunter Biden's appointment.

Shokin's removal wasn't Biden's initiative alone, they argued, but rather part of a bipartisan push for justice reform in Ukraine supported by several Republican lawmakers at the time.

While Trump's legal team will try to paint concern over Burisma as part of his intended clampdown on corruption, there is little evidence that Trump had an interest in investigating corruption within Burisma or in Ukraine prior to Biden entering the presidential race in April 2019.

What do voters think

Heading into next week's caucuses in Iowa, Biden remains the Democrats' frontrunner in national polls, but several recent state polls show Bernie Sanders overtaking him in Iowa and New Hampshire.

If Trump's lawyers push a Biden-focused line of attack this week, that could earn Biden some sympathy with primary voters.

"The Democrats are angry enough about how this has gone down that they will kind of lean towards him, if only out of defence of the party," Moss said.

The general election, however, is another matter.

Support for removing Trump from office has barely budged since the House voted to impeach the president in December, with just under 47 per cent of Americans supporting removal as of Jan. 24, according to the polling site FiveThirtyEight.

Among Republicans, it inched up slightly since the start of the Senate trial, from just under eight per cent to 10 per cent. Democrats' support sits at 84 per cent.

The defence team has one more day to present its case before the trial moves to the up to 16-hour question phase, where senators submit questions in writing that will be read out by Chief Justice of the Supreme Court John Roberts, who is presiding over the trial.

Senators will then have a chance to vote on whether to allow additional witnesses and documentary evidence.

That question gained new urgency late Sunday when the New York Times reported that former national security adviser John Bolton writes in a forthcoming book that Trump told him last August that he would continue to freeze the $400 million in aid until the Ukrainians followed through on the Biden investigation.

Trump immediately took to Twitter to deny the claim.

I NEVER told John Bolton that the aid to Ukraine was tied to investigations into Democrats, including the Bidens. In fact, he never complained about this at the time of his very public termination. If John Bolton said this, it was only to sell a book. With that being said, the...

Fifty-one senators have to vote in favour for the witness motion to pass, and the Democrats in the Senate number only 47. Sen. Mitt Romney, who is considered to be one of the Republicans who may be swayed to vote with the Democrats, said Monday that while he'll wait for the defence to complete their arguments, it's clear Bolton has relevant testimony to provide.

"It's increasingly likely that other Republicans will join those of us who think we should hear from John Bolton," he told ABC News.