'I will never try it again': Would-be migrant held for ransom in Libya regrets attempt to reach Europe

On the treacherous journey from Nigeria to Europe, Oluwaseun Femi Ijitola was sold by traffickers in Libya and jailed for four months until he paid a ransom.

​The ground is thick with mud and sewage. Wooden planks and tires scatter the slum, making a precarious pathway.

"We have to walk," says Oluwaseun Femi Ijitola, a 34-year-old taxi driver known as Seun. "No vehicle can pass through."

There is a look of shame in his eyes as he surveys this forgotten corner of Lagos.

On the water's edge of Nigeria's largest city, in the neighbourhood of Oworonshoki, people live in dire poverty with no sanitation, electricity or any other facilities, in ramshackle shanties covered with dirty tarpaulin and cardboard that barely keeps out the seasonal rains.

Chickens, goats and dog scavenge on mounds of garbage. Empty plastic bottles float on the tide of the Lagos Lagoon.

This is what Ijitola risked his life to escape when he became one of the hundreds of thousands of illegal migrants attempting to cross the Sahara desert to get to Europe and the hope of a better life.

"I have a dream of schooling abroad, and that is why I went to Libya," he says.

A local elder stops to question us. Strangers don't come here unless they are officials sent to evict people, he says suspiciously.

Ijitola says the area is "very, very rough and tough" and unlocks a tiny padlock to his wooden shack. His wife and five-year-old daughter aren't here.

"I sent them to be with the mother-in-law," he says. "I cannot feed them." 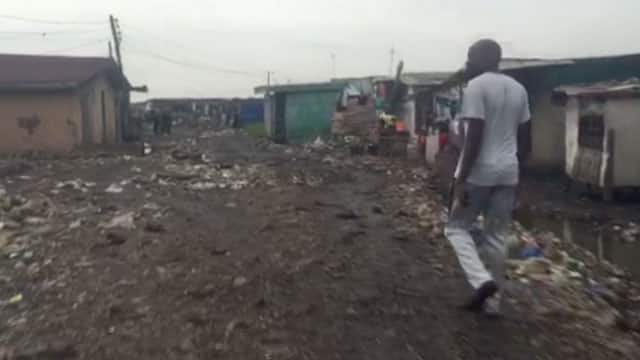 Oworonshoki, a slum on the edge of Lagos, Nigeria

3 years ago
0:28
Oluwaseun Femi Ijitola risked his life to escape and ended up being sold for ransom 0:28

​Local "area boys" — as the criminal gangs that extort money and mete out casual violence are known — loiter outside, smoking marijuana and drinking beer.

"I won't be able to sleep here tonight," Ijitola says. "They will give me hassle."

For Ijitola, the decision to leave Nigeria arose from a mundane problem: his car — the family's only source of income — broke down. In late 2016 he decided it was time to seek a better life.

He used what little money had to head north, taking a well-worn route. He took a bus more than 1,100 kilometres to Kano, in northern Nigeria, and from there across the border into Niger.

In Agadez, a transit town on the fringes of the Sahara that has become a staging post for the legions desperate to leave Africa, he paid traffickers to be taken on the treacherous crossing to Libya.

"It was tough. The sun was too much," he recalled. "We spent five days inside the desert without eating, only drink water, water, water. Anytime we finish, we needed more."

Crammed into a truck with many others, and with temperatures nearing 50 C during the day, he reached Libya and believed he was closer to his dream.

But his real nightmare had only just begun. In Sebha, nearly 800 kilometres from the capital, Tripoli, the driver sold them all to a man called Ali, who would then demand money for their release.

'They used to beat us every day'

There has been mounting concern from humanitarian agencies over Libya's makeshift prisons full of undocumented migrants who then become victims of human traffickers.

The prisons are divided into "ghettos," Ijitola says.  He was in the Nigeria ghetto, where he met people from countries all across West and Central Africa.

Women, who were held separately, were forced to sell themselves to their captors to get food, Ijitola says. "Those that refused the guards were raped," he says, his voice trailing off.

Violence was commonplace: "They used to beat us every day. Day by day they flog us with a pipe" — a practice referred to as giving the prisoners "morning tea," he says.

The UN body estimates that some 6,000-7,000 undocumented migrants are in detention facilities throughout Libya, where law and order has broken down since the fall of Moammar Gadhafi in 2011.

The IOM says the majority of illegal migrants to Europe come through the central Mediterranean route, via Libya: more than 100,000 in 2016, and already more than 85,000 so far this year.

West African governments watch as their young people are being lost to ruthless people-smugglers, who often also have links to organized crime networks involved in the smuggling of arms and drugs.

Seun's horrific ordeal lasted four long months. During that time he watched others die and thought he'd be next.

His freedom came at a price of $500, a sum his captors wanted deposited directly into their Nigerian bank account. His wife back in Lagos sold their broken car. The man who bought it borrowed the cash after hearing Seun being beaten during a phone call.

Seun had already paid nearly $1,500 to get to Libya — for him, a small fortune. After paying the ransom, he spent about a month working to fund the next leg of his journey — the boat crossing to Italy — when the Libyan authorities caught up with him.

He was deported to Nigeria in April.

"After the whole pain, the suffering, everything, the beating and all that, the work, everything I've done in Libya … I'm back to Nigeria with nothing," says Seun.

He always told his daughter that he wanted to give her an education, that he hoped she'd go "further than I do."

How he will do that is unclear. He has no car, no job, no money to buy food.

He feels exploited by the people who took his money along the way, calling them "evil," and likens the process to "a slave trade … buying passengers, buying human beings."

Africans need to know the true picture, he says.

"I will never try it again in my life," he says. "If I have opportunity to go to Europe again, it's going to be in the normal process."

Seun might now advise against the journey, but Danzinger, of the UN, says most people will ignore his warning and take a chance.

"They will … until they are provided with an alternative for a dignified and sustainable life in their community of origin," he said, "or for an opportunity to migrate regularly."