Florida rushed to prepare for a possible direct hit on the Miami area by the Category 5 storm with potentially catastrophic 295 km/h winds.

Nearly every building on the island of Barbuda was damaged when the eye of the storm passed almost directly overhead early Wednesday, and about 60 per cent of the island's roughly 1,400 people were left homeless, Antigua and Barbuda Prime Minister Gaston Browne said.

"Either they were totally demolished or they would have lost their roof," Browne said after returning to Antigua from a plane trip to the neighbouring island. "It is just really a horrendous situation."

In an interview with CNN earlier Wednesday, he estimated that more than 90 per cent of the island has been razed. Roads and telecommunications systems were destroyed and recovery will take months, if not years, he added.

A two-year-old child was killed as a family tried to escape a damaged home during the storm.

Officials have confirmed three deaths so far because of the hurricane.

This is only the second time since satellites started tracking storms about 40 years ago that one has maintained 295 km/h winds for more than 24 hours, said Colorado State University meteorology professor Phil Klotzbach. The other was Typhoon Haiyan, which killed more than 6,000 people in the Philippines in 2013. 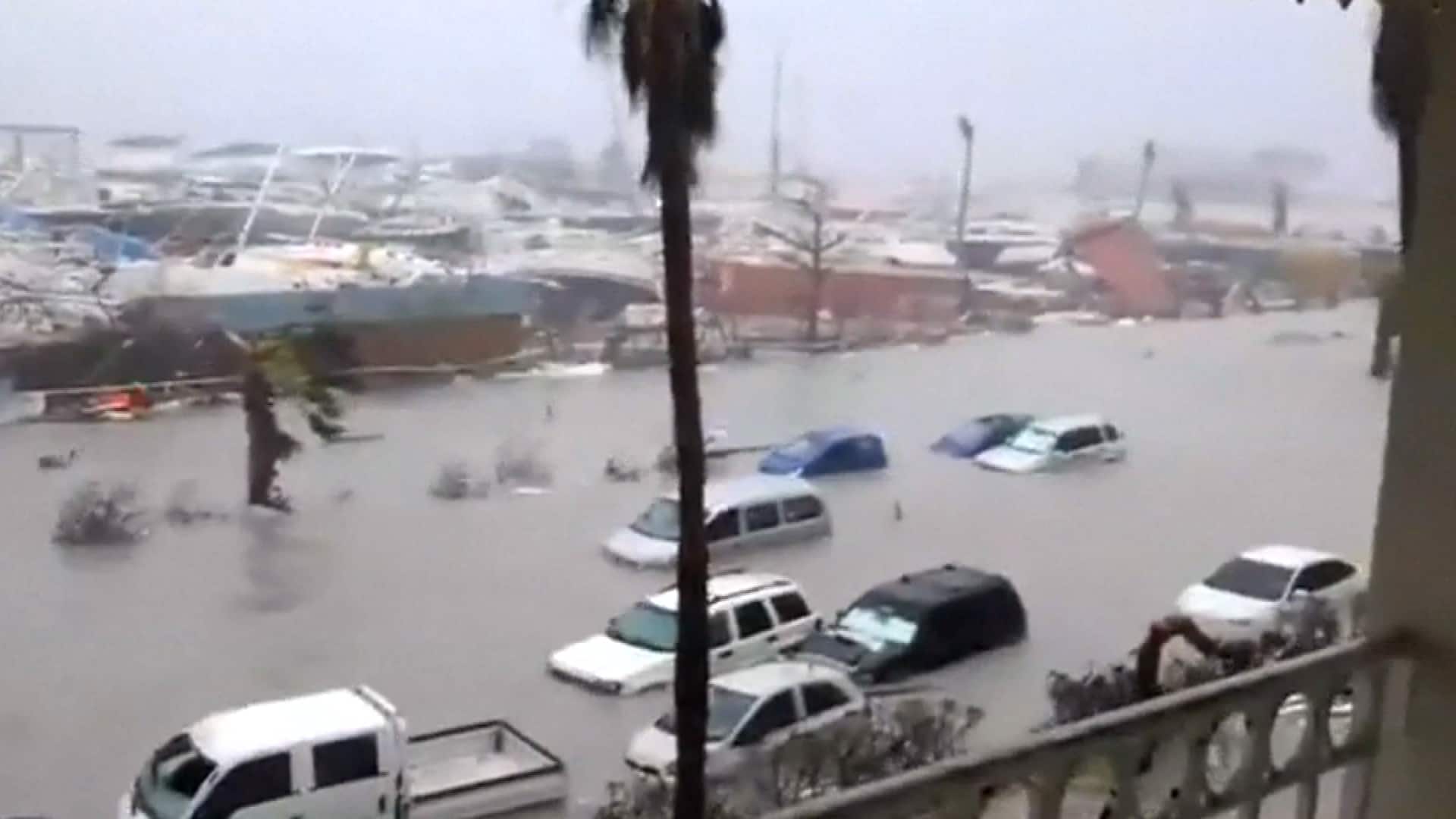 "It's a humdinger," he said. "This thing is a buzz saw; I'm glad Floridians are taking it very seriously," Klotzbach said.

France sent emergency food and water rations to the French islands of St. Martin and Saint Barthélemy, where Irma ripped off roofs and knocked out all electricity. The French overseas territories minister said at least two people were killed.

"We're talking about two dead and two seriously injured for now. Obviously the situation can change very quickly," Annick Girardin told reporters before boarding a plane for the region.

She said the government was launching an emergency plan but it was vital to assess the damage, because at this stage authorities could not get access to the worst-hit areas.

Dutch marines who flew to three Dutch islands hammered by Irma reported extensive damage but no deaths or injuries.

By early Wednesday evening, the centre of the storm was 64 kilometres northwest of St. Thomas in the U.S. Virgin Islands and 80 kilometres northeast of San Juan, Puerto Rico, and heading west-northwest at 26 km/h.

More than half of Puerto Ricans were without power and nearly 50,000 without water, the U.S. territory's emergency management agency said. Fourteen hospitals were using generators after losing power, and trees and light poles were strewn across roads.

"The dangerousness of this event is like nothing we've ever seen," Puerto Rico Gov. Ricardo Rossello said earlier in the day. "A lot of infrastructure won't be able to withstand this kind of force."

The federal government has stepped in, with U.S. President Donald Trump this week approving an emergency declaration for the U.S. Virgin Islands and Puerto Rico. That means that the Federal Emergency Management Agency and other agencies can remove debris and give other services that will largely be paid for by the U.S. government.

State maintenance worker Juan Tosado said he was without power for three months after Hurricane Hugo killed dozens of people in Puerto Rico in 1989.

The U.S. National Hurricane Center said Irma's winds would fluctuate, but the storm would likely remain at Category 4 or 5 for the next day or two as it roared past Puerto Rico, the Dominican Republic, Haiti, Cuba, the Turks and Caicos and parts of the Bahamas. Authorities in the Bahamas said they would evacuate six southern islands.

By early Sunday, Irma is expected to hit Florida, where Gov. Rick Scott said he planned to activate 7,000 National Guard members by Friday and warned that Irma is "bigger, faster and stronger" than Hurricane Andrew.

Scott said his administration "is looking at all possible avenues to get as many people out as possible," adding that an estimated 25,000 people have already left the Florida Keys area.

"I cannot stress this enough. Do not ignore evacuation orders. Remember: You can rebuild your home. You cannot rebuild your life."

Experts now worry that Irma could rake the entire Florida east coast from Miami to Jacksonville and then head into Savannah, Ga., and the Carolinas, striking highly populated and developed areas. The governors of North Carolina and Georgia declared states of emergency Wednesday evening.

"This could easily be the most costly storm in U.S. history, which is saying a lot considering what just happened two weeks ago," said University of Miami hurricane researcher Brian McNoldy.

The State Department authorized voluntary evacuation of U.S. diplomats and their families from the Dominican Republic, Haiti and Cuba, where the storm was expected to arrive by Friday. The department also ordered some government personnel to leave the Bahamas.

The Canadian Embassy in Havana said in a statement it is ready to provide consular assistance in Cuba.

"Due to the unpredictable eventual path and strength of Hurricane Irma, we are advising all Canadians to be prepared, have a plan, and most importantly, follow the advice of local authorities. Global Affairs Canada advises against all travel to the regions in the path of Hurricane Irma."

The website Cruisecritic.com said that 28 cruises had been cancelled, shortened or had their itineraries changed as a result of the hurricane.

In the Gulf of Mexico, tropical storm Katia also became a hurricane in the late afternoon off the coast of  Mexico's Veracruz state.

The storm is slowly strengthening and is likely to be near major hurricane strength at landfall, the NHC said.

The hurricane has maximum sustained winds of 130 km/h, the NHC said, adding that the government of Mexico has extended a hurricane watch northward along the coast of Mexico, to Cabo Rojo.

"Little overall motion is anticipated through late Thursday, but then the hurricane is forecast to turn south-westward and be approaching the coast within the watch area late Friday or early Saturday," the NHC said in a statement.

Similarly. by Wednesday afternoon tropical storm Jose transformed into a hurricane, which is also in the Atlantic but farther east than Irma. It poses no immediate threat to land.