HQ Trivia, the internet sensation out of New York City that attracts nearly a million players a game, has a host with a special affinity for Canada and a tie to an Ottawa trivia mastermind.

Why host Scott Rogowsky loves Canada so much

Scott Rogowsky, one of the hosts of the online game show HQ Trivia, has become an internet sensation for his nickname dropping and quick-thinking puns. But did you know he has a special affinity for Canada?

You may have seen hints of it if you're one of the hundreds of thousands who fire up the app every day at 3 p.m. or 9 p.m.  There are the occasional references to places like Moose Jaw, to the "Canadian Tuxedo," and the shout-outs to SCTV.

"I love this country, your country — I wish it was my country," Rogowsky told CBC News during a recent tour of the HQ office in New York.

So where does his love of Canada come from? Take a guess in true HQ Trivia fashion:

The New York-born Rogowsky isn't married, so that cancels A and B. The answer is C. In the summer of 2005, Rogowsky worked for a trucking company and drove from Montreal to Calgary, hitting everywhere in between.

"We're talking Sudbury, Thunder Bay, Sault St. Marie, Nipigon, Regina, Winnipeg. I don't think I got to Saskatoon, but Medicine Hat for sure," says the affable host, whose detailed knowledge of Canadian geography is combined with a childhood spent idolizing Canadian comedians like Rick Moranis and Martin Short. 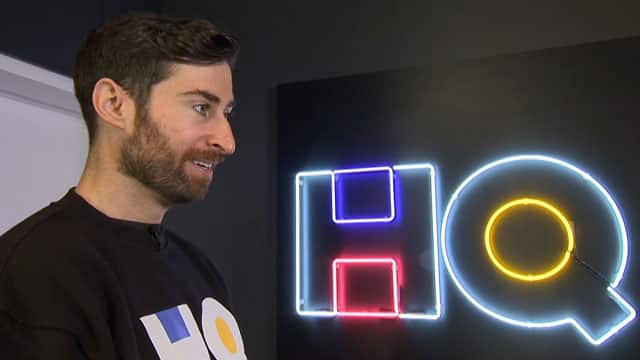 3 years ago
0:53
Scott Rogowsky, host of the wildly popular HQ Trivia app, reveals how he knows so much about Canada. 0:53

Launched in August, HQ Trivia routinely draws more than a million players for its afternoon and evening games. The app reached 2 million players during a special Super Bowl edition on Feb. 5, where the total prize money was $20,000 US.

There are a number of hosts, but Rogowsky quickly emerged as the clear fan favourite.

Not since Regis Philbin and Who Wants to be a Millionaire has a trivia show overtaken popular culture like this. With stories of office work and classes put on hold while the game is on, Rogowsky recognizes he's probably responsible for thousands of hours of lost productivity.

"When I was working office jobs, I was going on Facebook all the time. If I'd had HQ back then, I'd be on HQ now. It's healthier than a smoke break," he says.

Rogowsky usually arrives at the HQ offices a few hours before the show. He'll go over the script with the show's team of writers, producers and fact checkers. They'll discuss everything from his performance to the ease of the questions.

"We want to make them bulletproof, so there can't be any wiggle room for people complaining," Rogowsky says. "People like to complain."

App co-founder Rus Yusupov, who also helped create the video app Vine, says stumping the masses is especially challenging when the very device players are using is also a tool to find the answers.

"If you can Google the answer, if you can come up with the right keywords and find the answer [in 10 seconds], I think you deserve the reward."

One player who doesn't need a search engine to find the answer is Canadian Paul Paquet. He is one of Canada's foremost trivia experts, having hosted trivia nights in Ottawa for 20 years.

Paquet estimates he's written more than 100,000 multiple choice questions in his career, so it's no surprise that he's one of HQ's top players.

"The skill you need is to be a good guesser," he says. "So you're trying to outthink the way the question's writer is thinking."

Even with an encyclopedic knowledge of trivia, Paquet says he doesn't always know the answer right away, but he does have a strategy.

"What I often find, especially in the later questions, is that the answer might well be the thing that seems least likely to you," he says.

Paquet is so good, in fact, they've offered him a job at HQ Trivia.

He says over the years he's learned the key to writing a good trivia question.

He says he's eager to get started, "because I've been thinking of ideas I can write, maybe put a little Canadian spin on some things."

The Future of HQ

Industry watchers say the biggest question for HQ Trivia itself is whether it can keep up the momentum and hold the interest of players like Paul, or end up another passing fad like Pokemon Go.

There's already a slew of copycats, and in some ways HQ Trivia is a victim of its own success — the game can be slow to load, and sometimes freezes under the stress of so many players.

Whether it's successful over the long-term or not, co-founder Yusupov says HQ Trivia has broken the mould of conventional mobile games that try to suck players in for as long as possible.

"We've created a new category here," Yusupov says. "The games happen by appointment, so it's not on all day every day and you can't access it whenever you'd like. And I think that's a new way of thinking about experiences on smartphones that I think many companies can adopt."

With close to a million eyeballs on each game, the app is an advertiser's dream. The creators have managed to keep it ad-free, but Yusupov says the day is coming when they'll incorporate ads — though he won't say how.

Yusupov does say he wants to avoid the mistakes of conventional TV, and not ruin the experience with too many commercials.

He also promises that bigger prizes are on the way. With advertising comes revenue, and that could mean bigger paydays.

"We'd love to give away a million dollars one day. I think we're getting close."