The 96 Liverpool soccer fans who were crushed to death in overcrowded sections at Hillsborough Stadium in 1989 were "unlawfully killed" in a disaster caused by police actions, a jury concluded Tuesday. 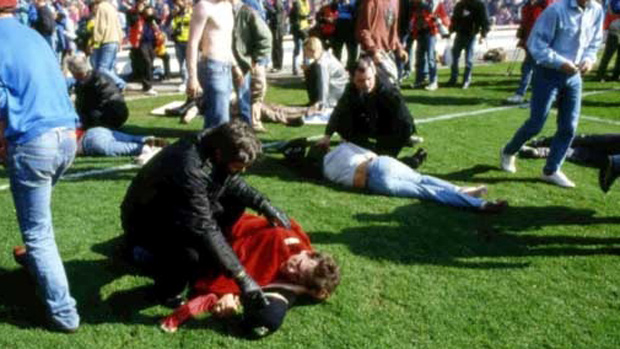 6 years ago
Duration 2:23
Families spent more than a quarter of a century working to reverse the verdicts of accidental death at the original inquests following the April 1989 FA Cup semifinal match

The 96 Liverpool soccer fans who were crushed to death in overcrowded sections at Hillsborough Stadium in 1989 were "unlawfully killed" in a disaster caused by police actions, a jury concluded Tuesday.

The police force responsible for the stadium in the northern English city of Sheffield said "we unequivocally accept the verdict," while apologizing for their failings to families who have spent 27 years campaigning for the police to be officially blamed.

Relatives of the victims of the disaster chanted "Justice for the 96" and sang the Liverpool club anthem, "You'll Never Walk Alone," outside a specially-built courtroom after the conclusion of two years of fresh inquests into Britain's worst sporting disaster.

By the end of the year, police plan to conclude a separate criminal investigation into wrongdoing by authorities at the April 1989 FA Cup semifinal match between Liverpool and Nottingham Forest at the stadium where second-tier English club Sheffield Wednesday still plays.

The Crown Prosecution Service said it will then "formally consider whether any criminal charges should be brought against any individual or corporate body."

British Prime Minister David Cameron paid tribute to the courage displayed by the victims' families, tweeting that "long overdue justice" had been provided by the jury.

Landmark day as the <a href="https://twitter.com/hashtag/Hillsborough?src=hash">#Hillsborough</a> inquest provides long overdue justice for the 96 Liverpool fans who died in the disaster.

Families have fought to ensure authorities were held to account after being angered by the verdicts of accidental death at the original inquests. Those verdicts were overturned in 2012 following a far-reaching inquiry into the disaster that examined previously secret documents and exposed the wrongdoing and mistakes by police.

"There's many a time we've been climbing up the mountain. We wanted to stop, we wanted to stop," said Margaret Aspinall, whose 18-year-old son James died at Hillsborough. "It's the ordinary people. It's the fans, the survivors. They were the ones chanting for justice at all the games, they are ones giving you that uplift. You've got to carry on."

Relatives leapt to their feet at verdict

New hearings held in Warrington, close to Liverpool in northwest England, required a jury for the longest time in British legal history.

Relatives leapt to their feet, cheering and weeping, as the jury gave its answer to the most significant of the 14 questions set by the coroner, reaching the verdict of unlawful killing by a 7-2 majority.

That finding meant the jury was convinced David Duckenfield, the then-South Yorkshire Police chief superintendent in charge of policing the game, was in breach of his duty of care to fans and his actions amounted to "gross negligence."

Duckenfield told the inquests that he told a "terrible lie" by saying fans had rushed through gates at the Leppings Lane turnstiles eight minutes before kickoff rather than admitting to authorizing for the gates to be opened. The order allowed more than 2,000 fans to flood into a standing-room section behind a goal with the 54,000-capacity stadium already nearly full.

Inside the stadium, five minutes after kickoff, a surge of people pushed hundreds of spectators against a steel mesh fence that soon collapsed. A police officer ran onto the field and asked the referee to halt the game, which was abandoned after six minutes at 3.06 p.m.

Fans and rescue workers ripped up advertising boards and used them as makeshift stretchers as police and first aid workers treated victims on the field.

"The police delayed calling a major incident so the appropriate emergency response was delayed," the jury concluded. "There was a lack of co-ordination, command and control which delayed or prevented appropriate responses."

Even before the funerals were held 27 years ago, families had to start fighting to uphold the reputations of the deceased.

Hooliganism was rife in English soccer throughout the 1980s and there were immediate attempts to assign blame on Liverpool fans and to defend the policing operation. A false narrative that blamed drunken, ticketless Liverpool fans was created by police and spread by a lawmaker in Sheffield.

The jury unanimously stated that police planning errors "caused or contributed" to the situation that led to the crush and confirmed the behavior of fans did not cause or contribute to the tragedy.

This has been the greatest miscarriage of justice of our times. But, finally, it is over.- Andy Burnham, Labour Party MP

"I knew the truth 27 years ago, just came here to hear it confirmed," 51-year-old Gary Spencer, who was at the game, said outside the courtroom.

It took fresh campaigning into the 21st century, with families assisted by lawmakers, including Andy Burnham of the Labour Party.

"This has been the greatest miscarriage of justice of our times. But, finally, it is over," Burnham said. "The sense of relief we feel is tempered by the knowledge that this day has taken far too long in coming. The struggle for justice has taken too great a toll on too many."

The disaster prompted a sweeping modernization of stadiums across England and also transformed inadequate policing. In the immediate aftermath, plans were being made to renovate the top division stadiums into safer, all-seater venues, with fences around fields torn down.

"The Hillsborough Disaster changed the way in which major sporting events are policed and many lessons have been learned as a result," South Yorkshire Police Chief Constable David Crompton said Tuesday. "Today with improvements in training, communication and technology it's almost impossible to imagine how the same set of circumstances could arise again."​

Many shared their thoughts on the verdict moments after it was announced, with many saying justice had been served.

Justice at last for the 96 victims of the Hillsborough Disaster. Nobody should ever go to a football match &amp; be killed. 27 years of misery