By linking Trump with hate groups, Clinton spotlights the 'alt-right'

The 'alt-right' has existed for years as an obscure political subculture shrouded in racist innuendo. On Thursday, Democratic presidential candidate Hillary Clinton sought to lay bare the white-nationalist movement, holding it up as a mirror to forces backing Republican Donald Trump.

Even to conventional conservatives, the "alt-right" has existed for years as an obscure political subculture shrouded in racist innuendo.

On Thursday, however, Democratic presidential candidate Hillary Clinton sought to lay bare the white-nationalist movement in her terms, holding it up as a mirror to extremist forces backing Donald Trump.

The reflection was ugly. And it was one that Clinton contends shares a disturbing likeness with the "emerging racist ideology" that has emboldened her Republican opponent.

"Donald Trump has built his campaign on prejudice and paranoia. He is taking hate groups mainstream and helping a radical fringe take over the Republican Party," Clinton told an audience in Reno, Nev.

Clinton took on the anti-immigration doctrine that has, until recently, largely seethed in dark corners of the right-wing internet on blogs and web forums such as The Daily Stormer and 4chan. Energized alt-right voices, she warned, are finding a home with Trump.

It was a remarkable comment about the noxious level of discourse that has set Trump apart from any presidential nominee ever to represent a major U.S. party.

"Like nothing we've heard before," as Clinton put it.

To moderate voters, the alt-right movement — largely made up of online trolls espousing anti-immigrant views and rejecting traditional conservatism — may have been little known until recently. By defining it so publicly as a hate ideology, Clinton not only entered it into the lexicon of modern American politics; she tied it explicitly to Trump. 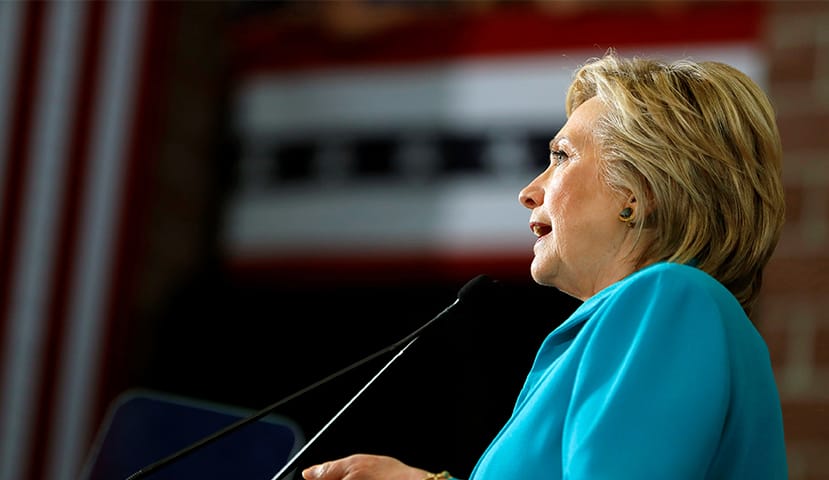 4 years agoVideo
1:46
Democratic candidate for U.S. president talks about Brietbart, Donald Trump and their relationship to the far right group known as the 'Alternative Right' 1:46

That builds the case against Trump's suitability for America's highest office, says Allan Lichtman, a political historian with the American University in Washington and an expert on rising conservative movements.

"This has nothing to do with what office you held, but with your character, your temperament, your history, and the way that you behaved with your associates," he says.

"Americans have a right to know about the alt-right … because it's frightening to think that anti-Semites, racists, neo-Nazis and the Ku Klux Klan believe the Trump campaign is a signal that their time has come."

It may be a good strategic move for the election, particularly if it draws in moderates who may be left aghast by Trump's embrace by the alt-right, says Reilly, who debated white nationalist Jared Taylor on racial diversity in April.

"But I regret the light it's shining on some dark crevices of the internet," Reilly says.

Even so, he adds, "it's legitimate because Trump is the alt-right candidate."

If that sounds like a stretch, consider who Trump has installed as his new campaign manager last week. That job went to Stephen Bannon, chairman of Breitbart Media, the group that operates Breitbart.com, arguably the central organ of alt-right opinion.

Bannon himself told Mother Jones last month, "We're the platform for the alt-right."

Clinton also referenced the hiring of Bannon on Thursday, calling it a de facto merger that "represents a landmark achievement for this group, a fringe element that has effectively taken over the Republican Party."

The reminders about the Breitbart alt-right connection to Trump's campaign come as he fends off scrutiny about softening his hardline immigration policies. On Thursday, he met with black and Hispanic activists in Trump Tower in an event billed as an outreach effort for minority communities.

"The alt-right are dangerous, dangerous people," says Joel Silberman, a Democratic media strategist in Washington. "What people are talking about now is this idea of white supremacists bonding together with conspiracy theorists. That's pretty scary stuff."

Clinton pointed to apparent "race-baiting" activity by the Trump camp, including the retweeting of a "WhiteGenocideTM" account to the candidate's 11 million followers, and his campaign's posting of an image featuring Clinton set against a pile of money with a Star of David. That meme, which was widely criticized as anti-Semitic, was eventually traced to the alt-right forum 8chan.

To Silberman, it's classic emotional fearmongering that Clinton is now rightfully outing.

"Let's not pretend the alt-right hasn't been a part of the rise of the anger that's fuelling the movement behind Trump's campaign," he says.

So many in the African-American community are doing so badly, poverty and crime way up, employment and jobs way down: I will fix it, promise

In her speech, Clinton used phrases like "racist lie" and "racially tinged rumours" to describe Trump's campaign, which is now buoyed by white nationalists such as Kevin MacDonald.

MacDonald, a leading alt-right thinker and the editor of the online "white identity" publication The Occidental Observer, rejects that kind of language, arguing "it's legitimate to want to maintain a white majority in America."

"I'm a white advocate. But 'white supremacist' has all kinds of bad connotations," he said from Long Beach, Calif.

"This is a breakthrough for us, and I don't think it's going to be so easy to put that back in the bottle."

The "publicity," MacDonald says, is more than welcome.

Alt-right writer Richard Spencer, president of the white-nationalist think tank the National Policy Institute, also predicted in a recent editorial in his Radix Journal that Clinton's speech would have the inadvertent effect of "empowering" what was once largely a fringe movement.

That kind of rhetoric fails to faze Lichtman, the political historian at American University.

"Hate should be confronted, exposed, and brought into the sunshine," he says. "I'm not a big believer in combating hate with silence."