New floods possible in Houston as thousands return after Harvey

Authorities went door-to-door Sunday in parts of storm-battered Houston, warning that more flooding was coming as thousands returned to their homes to survey damage from catastrophic storm Harvey. 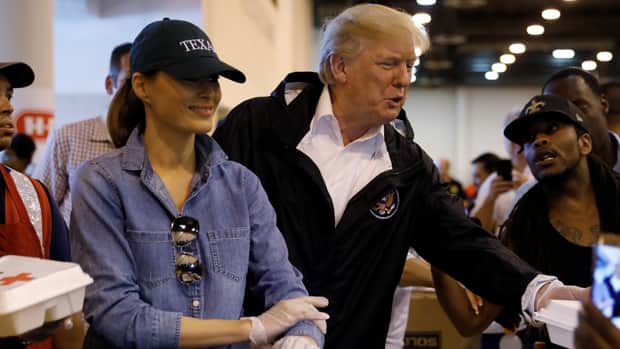 Authorities went door-to-door Sunday in parts of storm-battered Houston, warning that more flooding was coming as thousands returned to their homes to survey damage from catastrophic storm Harvey.

Nine days after Harvey ripped its way across Texas, areas of west Houston braced for more water — not from the storm but from controlled releases to relieve swollen reservoirs. Crews were urging residents whose homes had already taken on water to flee, and that they were shutting off power in some areas.

"If you have water in your homes, I have issued a mandatory evacuation for them because it's dangerous for those who are choosing to live there," Mayor Sylvester Turner told NBC's Meet the Press.

"But also, it's very, very dangerous for our public responders, first responders, who are needing to be out there, trying to provide protection to them," he added.

Authorities later launched a controlled burn at a chemical plant damaged by Harvey that already had seen several explosions, saying the highly unstable compounds needed to be neutralized.

Officials announced "proactive measures" to ignite the six remaining trailers at the Arkema plant in Crosby, Texas, but said it wouldn't pose any additional risk to the community. People living within 2.4 kilometres of the site are still evacuated.

Video broadcast Sunday afternoon showed small flames burning in charred structures at the plant, with a limited amount of light grey smoke. John Rull, who lives two miles away, told the Houston Chronicle he heard two booms and saw thick black smoke. He said the explosions were louder than one he heard Friday when two containers burned and that there was much more smoke.

For many in the Houston metropolitan area, which has an economy as large as Argentina's, losses to individual families were cataclysmic.

In a neighbourhood in east Houston, streets were lined with 2.4-metre piles of soggy debris, including mattresses, carpets and other belongings ripped out of homes.

Adrian Rodriguez returned on Saturday to his flood-hit home there where he lives with his wife and three young boys.

"I lost everything. All my children's pictures of them growing up. Their birthday pictures. Vacation pictures. Their school projects of what they wanted to be when they grow up," he said.

"There is furniture on the sidewalk that I'm still paying for. Everything in the house is history."

Officials said at least 75 schools in Houston suffered severe or extensive water damage, or more than 25 per cent of all those in the district. At least one high school, with 2,700 students, was unlikely to open for nearly the entire school year, and the city was still evaluating some other school structures.

Damage from the storm is also posing an economic and humanitarian challenge for U.S. President Donald Trump, who visited Houston on Saturday and met some of the thousands of people in evacuation shelters and rescue workers who have helped shuttle survivors to safety.

The visit gave Trump an opportunity to show an empathetic side, after some criticized him for staying clear of the disaster zone during a Texas visit on Tuesday. Trump said he did not want to hamper rescue efforts.

Just got back to the White House from the Great States of Texas and Louisiana, where things are going well. Such cooperation &amp; coordination!

Colonial Pipeline Co, the biggest U.S. fuel system, delayed reopening a segment of its system in Texas that was shut due to Harvey, increasing worries about rising retail prices and the domestic distribution of gasoline and distillates.

The company, which had originally scheduled a Sunday restart for the segment going from Houston to Hebert, Texas, said it planned to reopen the distillates line on Monday. It added that the 8,850-kilometre system, that begins in Houston and ends in Linden, N.J.,would be ready to move gasoline on Tuesday.

U.S. gasoline prices continued to rise through the weekend amid fears of shortages, despite the restart of several key refineries on the U.S. Gulf Coast that had been crippled by the storm.

Meanwhile, U.S. Treasury Secretary Steven Mnuchin on Sunday called on Congress to combine a $7.9-billion US disaster relief package for Harvey with an increase in the nation's borrowing limit, saying it was time to "put politics aside" so storm victims in Texas can get the help they need.

"The president and I believe that it should be tied to the Harvey funding. Our first priority is to make sure that the state gets money," he said. "It is critical, and to do that, we need to make sure we raise the debt limit."

Extensive damage left by Harvey in Texas is estimated at between $150 billion and $180 billion, state Gov. Greg Abbott said on Sunday. That could be more than 20 times bigger than the $7.85 billion in initial funding Trump requested from Congress last week.

Elsewhere, a new storm, Irma, strengthened on Friday into a Category 3 hurricane on the five-step Saffir-Simpson scale. It remained more than 1,600 km from the Leeward Islands, where residents were advised to monitor its progress.