Guns sales are booming yet again in America, as they seem to do in the wake of every shooting tragedy and threatened crackdown, Neil Macdonald writes. It's the conundrum of Obama's presidency, made worse every time he tries to take on the NRA.

Guns sales are booming yet again in America, the third such surge since Obama became president

The National Rifle Association, reacting with fury and loathing to President Barack Obama's attempts to enforce existing gun regulations, displayed a picture of him on its website this week.

It's a head-and-shoulders shot taken from behind, at a moment when the president was hunching slightly, and so emphasized the protruding ears Obama himself has joked about.

But this was no joke. You don't need a membership in Mensa to figure out the subtext: "This monkey wants to take your guns, America."

It is not hard to imagine what America's armed fanatics were thinking  ("We'll give that traitor something to really cry about") when tears streamed down Obama's face this week as he recalled the children who were torn apart four years ago at Sandy Hook elementary school in Connecticut.

To the leadership of the NRA — the people who move America ever closer to a society in which everyone is not just armed, but immunized and empowered by stand-your-ground laws, allowing them to open fire at any threat, real or imagined — Obama is a criminal president, attacking the Second Amendment of the basic law they claim to hold sacred.

Some of them probably think "standing your ground" would be a legitimate defence for actually using the assault rifles some gun lovers ostentatiously carry to Obama's public rallies.

The U.S. is probably the only country in the world that allows such openly menacing behaviour toward its leader.

In any event, the NRA isn't terribly subtle; its website also carries an editorial denouncing a couple of New York state legislators, two women who favour tightened access to guns — with a few bullets sprinkled on their pictures.

Make of that what you will, ladies.

Just at a guess, the Secret Service is probably more worried about protecting Obama this week than it was last week.

Here, in essence, is what the president is being denounced for attempting to do:

Oh, and he's also encouraging the development of so-called smart guns, weapons that contain technology preventing them from discharging if the trigger is pulled by someone other than their registered owner.

As Obama said, if we can prevent children from opening Aspirin bottles, why not keep them from shooting guns?

These are not exactly radical measures: enforcing existing laws, helping police do their jobs and protecting children.

Naturally, the gun lobby opposes them all.

"We will not allow law-abiding gun owners to be harassed or intimidated for engaging in lawful, constitutionally-protected activity," declared the NRA in response to the president's announcement.

Interesting, by the way, that reference to "law-abiding."

Nowhere on the NRA site is there any denunciation of the heavily armed "militiamen" who are occupying a federal wildlife refuge in rural Oregon because they're angry that two of their ideological fellow-travellers were sent to prison for arson on federal land.

This heroic band, waving around copies of the Constitution for reporters and cameras, has posted lookouts and is threatening to use their weapons if police seek to enforce the law and eject them.

They've appealed for public donations for things they need, including "camo gear," the better to conceal themselves as they aim their rifles.

Risibly, they've repeatedly compared themselves to Black Lives Matter, the group that has carried out (unarmed) disruptions in shopping malls and on public roads to protest the alarming number of killings of unarmed black Americans by police, who are almost never convicted.

Actually, they're probably lucky nobody is confusing them with armed black men. Otherwise they'd probably already be dead or in hospital for such open defiance of authority.

And if they were Muslims, well, you know.

But back to President Obama's attempts to enforce gun laws: it's so sensible it's probably doomed. Americans love their guns.

Gun sales spike after every mass-murder outrage and threatened crackdown, just as they did after Obama's election and the Sandy Hook outrage, and just as they are doing now, in reaction to this newest announcement. 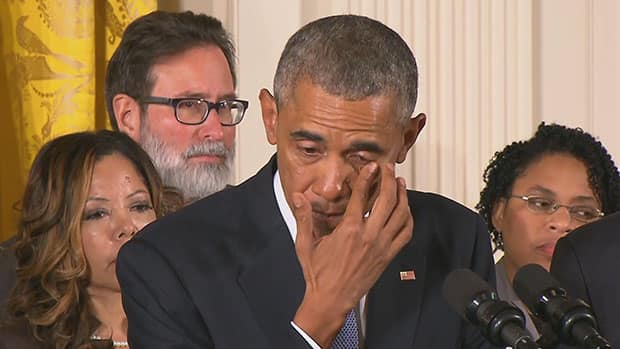 Obama tears up over shooting victims

5 years agoVideo
1:22
U.S. president announces new gun control measures to curb what he has described a scourge of gun violence 1:22

House Speaker Paul Ryan, behind only the vice-president in succession to the Oval Office, called Obama's efforts a "dangerous overreach of executive power."

Cruz was educated at Princeton and Harvard. Ryan is considered to be among the most intellectual of the Republican leadership.

And yet, it seems not to have occurred to either or them, or all the other conservative politicians racing to grovel at the door of the NRA, that the Oregon militia characters actually fit the Republican definition of terrorist (using armed force to advance a political agenda), and that the gun freedoms they are so vocal in defending seem to include the freedom of deranged criminals to anonymously acquire viciously destructive weapons for the purpose, say, of killing children.

Or police. Or, yes, politicians.

Just like the people they do choose to call terrorists.