London firefighters battling to control the deadly Grenfell Tower blaze faced intolerable dilemmas as to whether to direct residents to stay put or try to escape through toxic smoke, a public inquiry has been told.

London firefighters battling to control the deadly Grenfell Tower blaze faced an "intolerable" dilemma as to whether to direct residents to stay put or try to escape through toxic smoke, a public inquiry has been told.

Firefighting tactics are in focus at the inquiry into the Grenfell Tower fire, Britain's deadliest on domestic premises since the Second World War, which killed 72 people overall inside the 24-storey social housing block on the night of June 14, 2017.

A fire safety expert and some survivors have suggested that more lives could have been saved if firefighters had attempted a total evacuation rather than advise people to stay in their flats while they tried to bring the fire under control.

In a statement to the public inquiry that was published on Tuesday, the London Fire Brigade (LFB) defended its decision to stick to its "stay put" advice until late into the night, saying the magnitude of the blaze had presented unprecedented challenges.

"The LFB Control Centre was required to handle more calls requiring fire survival guidance from residents within Grenfell Tower on the night of the fire than the total number of such calls in the previous 10 years from the whole of London," it said.

Firefighters had found themselves in "intolerable positions" as they had to decide whether to tell people to stay in flats, where the air was relatively clean and hope the blaze could eventually be put out, or direct them down the staircase, which was filled with poisonous smoke.

In the event, the fire engulfed the entire building and no one who stayed inside survived.

The fire brigade said highrise buildings like Grenfell Tower were supposed to be designed so as to contain any fire in its compartment of origin for enough time to allow the fire service to extinguish it before it had the chance to spread.

Accordingly, buildings were not designed to allow total evacuation and the best safety advice to occupants was to "stay put" unless directly affected by smoke or fire. The fire brigade said this policy had largely been effective since highrise housing blocks started appearing in London in the 1950s. 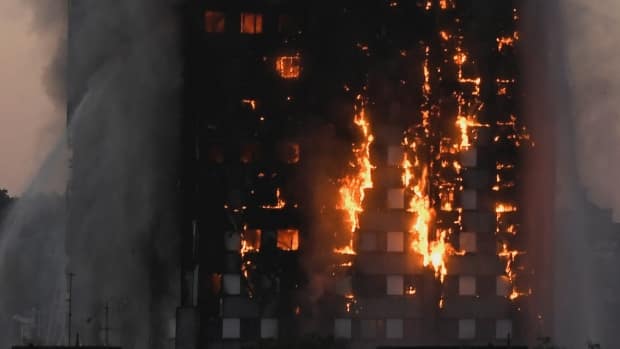 Grenfell inquiry begins in U.K. with dramatic visuals showing speed of fire as it engulfed building

Some survivors accuse officials of ignoring safety concerns because the public-housing block was largely home to immigrant and working-class residents.

Lawyer Imran Khan, who represents some of the bereaved and survivors, said Tuesday that the inquiry should consider whether racism contributed to the deaths in the blaze.

Otherwise, he said, "we will be putting at risk the lives of thousands, if not hundreds of thousands, of people from black and ethnic minority communities, who are over-represented in high-rise blocks across Britain."

Completed in 1974, Grenfell Tower was owned by the local authority of the borough of Kensington and Chelsea. It had been refurbished between 2012 and 2016, and fire safety experts have told the inquiry that several aspects of those recent works had made the tower unsafe.

In particular, the building was enveloped in a combustible cladding. Once the fire broke out of its point of origin, a fourth-floor apartment, it ignited the cladding and the flames raced to the top of the building in minutes.

The inquiry will hear from companies involved in the refurbishment and the management company that oversaw the tower. In opening statements, they urged the inquiry not to rush to judgment.

The refurbishment is also being examined in exhaustive detail by the public inquiry. Police are conducting a separate criminal investigation which they say could result in charges against individuals or organizations.