In tribute to Ginsburg, opera star sings and trainer does pushups as honours continue at U.S. capitol

The late Supreme Court Justice Ruth Bader Ginsburg is lying in state Friday at the U.S. Capitol, the first woman in American history to do so, in commemoration of her extraordinary life. 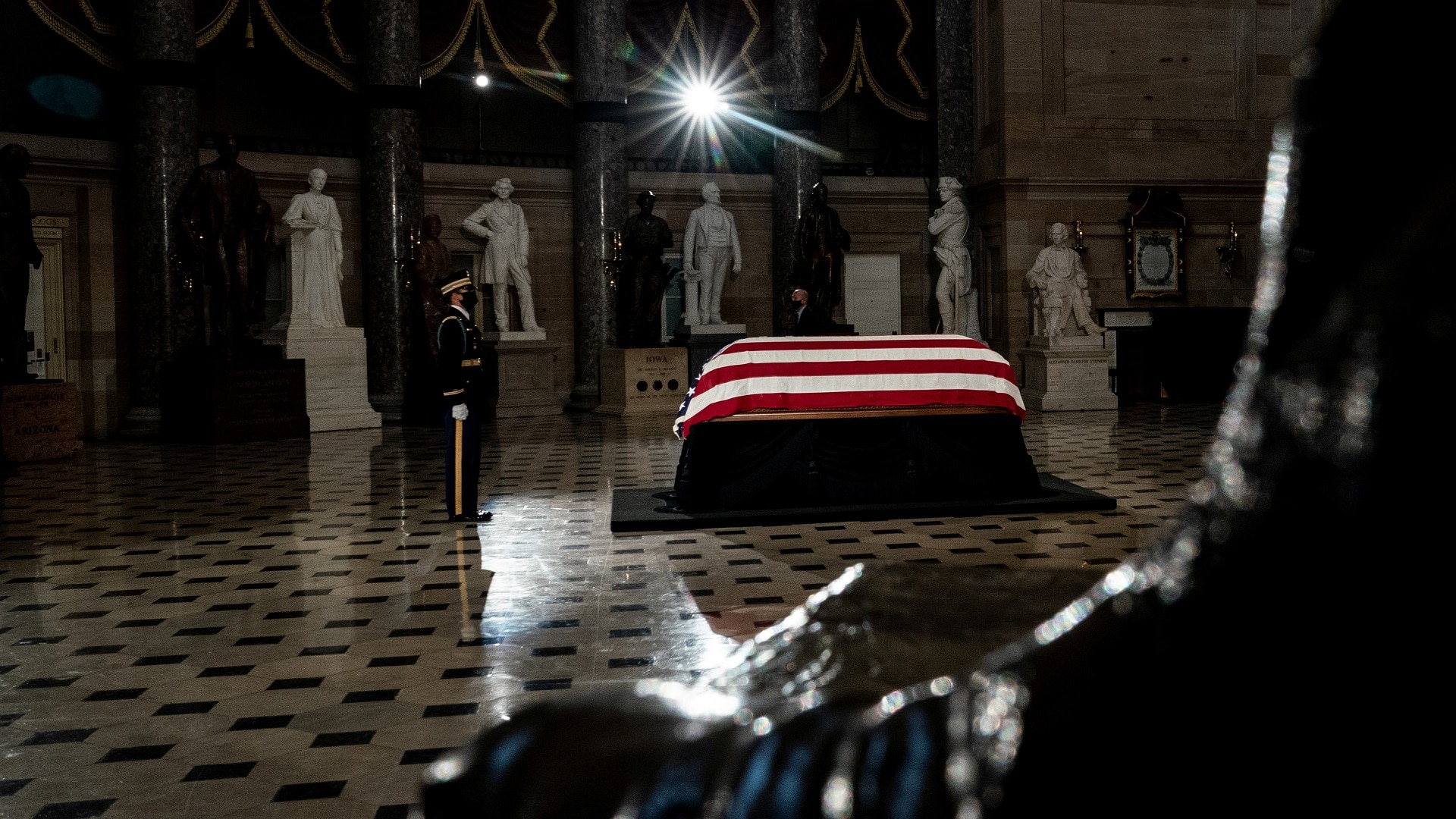 1 month ago
11:17
Scenes from Supreme Court Justice Ruth Bader Ginsburg lying in state at the U.S. Capitol, the first woman to receive that honour. 11:17

The late Supreme Court Justice Ruth Bader Ginsburg is lying in state Friday at the U.S. Capitol, the first woman in American history to do so, in commemoration of her extraordinary life.

Mourners gathered under coronavirus restrictions at the service for Ginsburg, who died last week at age 87, as her casket made the short procession from the court's steps where it had been on public view for several days to the East Front of the Capitol. A military honour guard carried it inside the Capitol's stately Statuary Hall.

The politics of the moment, in a tense election year, rippled throughout the celebrations this week of Ginsburg's life and career.

Services were brief, with the rabbi's reflections and prayer, before guests lined up to pass by the casket and pay their respects. The ceremony featured one of Ginsburg's favourite opera singers, mezzo-soprano Denyce Graves. 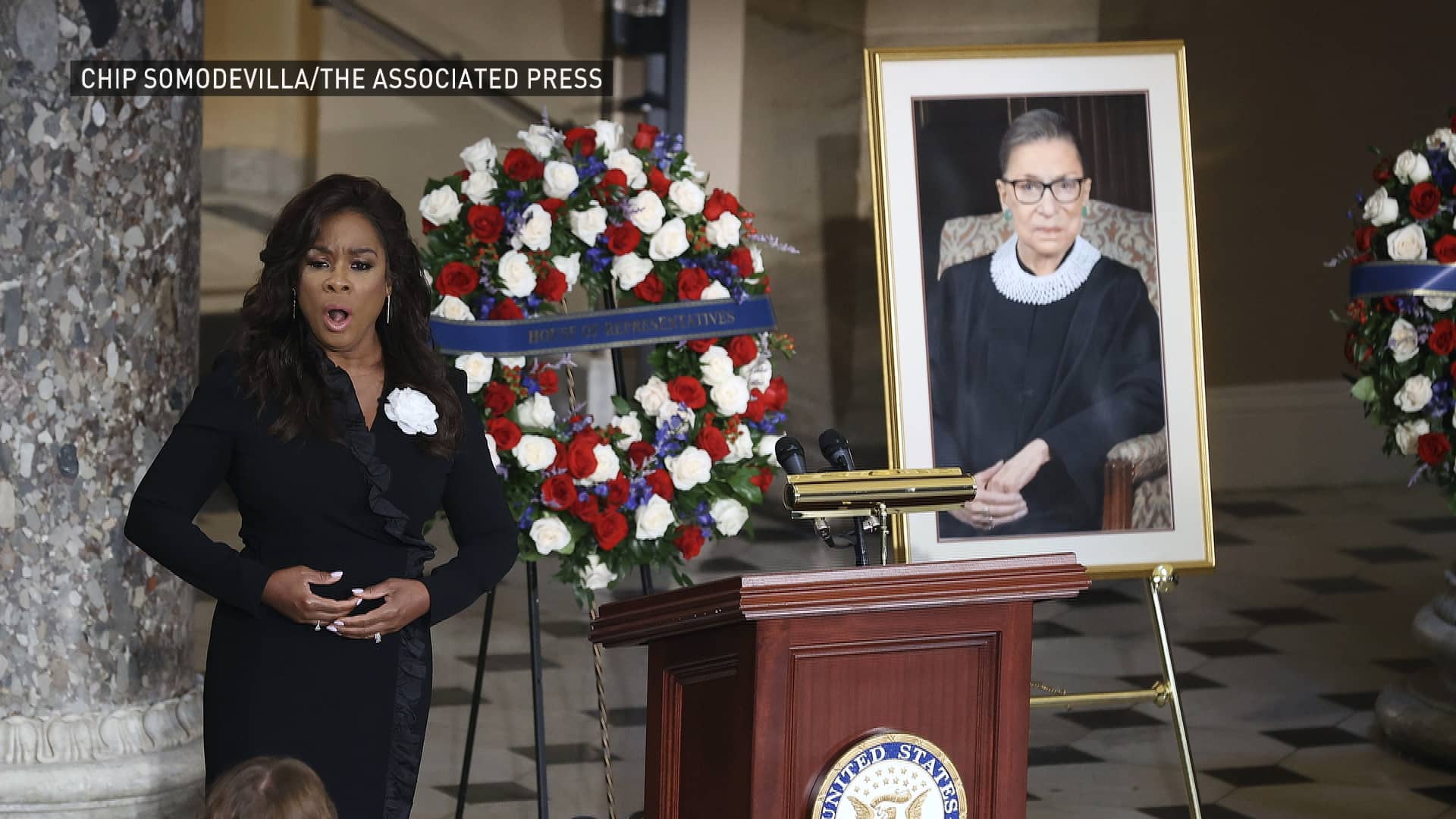 1 month ago
4:18
Mezzo-soprano Denyce Graves sang Gene Scheer's 'American Anthem' during Friday's memorial as a tribute to the late supreme court justice who was a lifelong opera fan. 4:18

Small in stature, large in history, the Brooklyn-born Ginsburg was remembered as a bright Columbia graduate who was passed over for jobs at a time when few women entered law, only to go on to reshape the nation's laws protecting women's rights and equality.

'One of the greatest Americans'

Most of those in attendance were Democrats, including Sen. Elizabeth Warren of Massachusetts and Sen. Amy Klobuchar of Minnesota, both former presidential candidates.

Harris said RBG, as the late justice is known by many, "absolutely" and intentionally cleared a path for women like her in civic life. 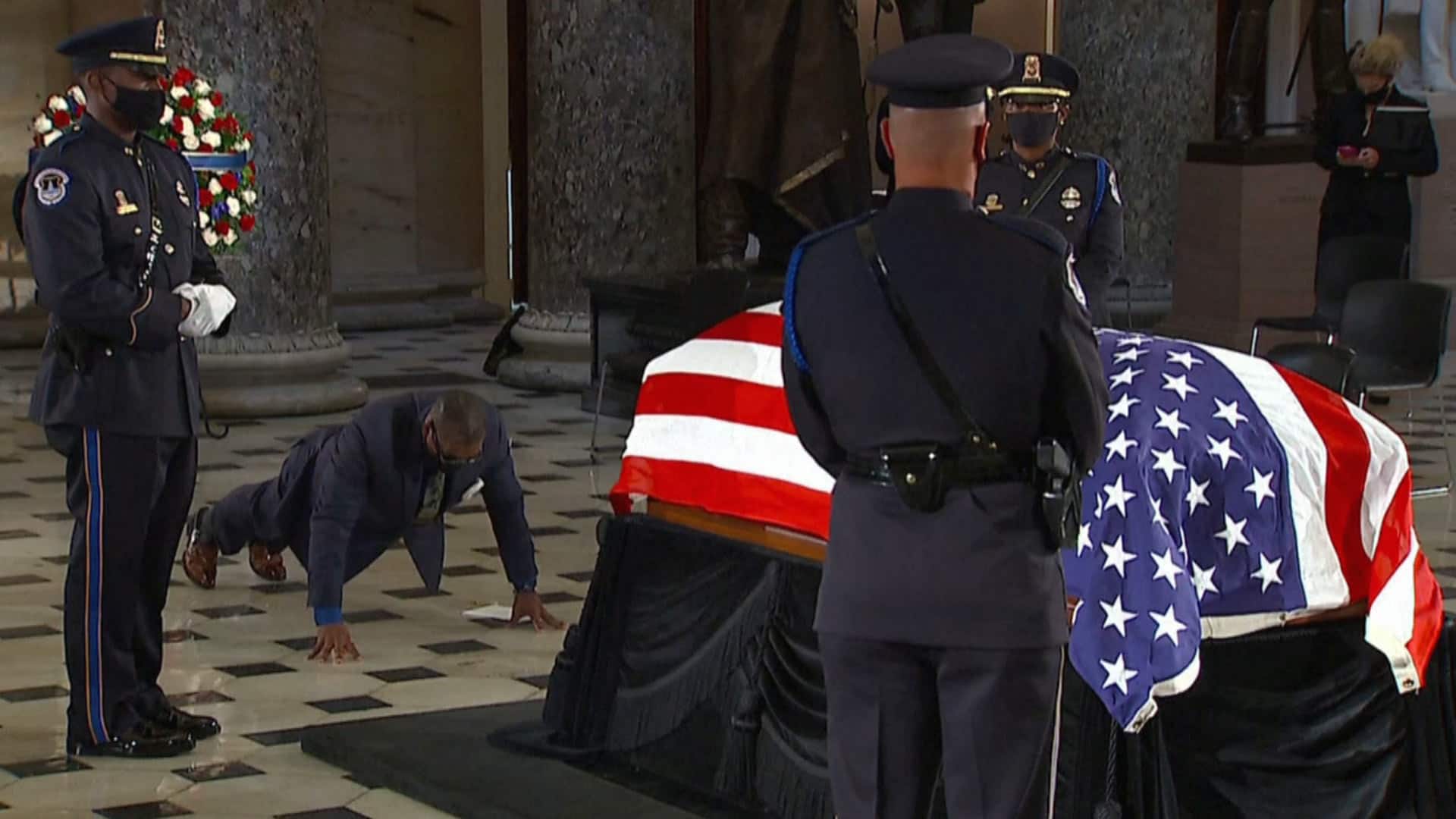 1 month ago
0:18
Bryant Johnson, the trainer of U.S. Supreme Court Justice Ruth Bader Ginsburg who died Friday, paid his respects while performing push-ups by her casket. Ginsburg, known for championing rights for women, is the first woman and Jewish person to lay in state at the U.S. Capitol. 0:18

"She, first of all, made America see what leadership looks like — in the law, in terms of public service — and she broke so many barriers," Harris told reporters at the Capitol. "And I know that she did it intentionally knowing that people like me could follow."

She called Ginsburg "one of the greatest Americans."

Toward the end of the line of mourners, one dropped to the ground and did three quick pushups. It was Bryant Johnson, the justice's beloved trainer who oversaw her popular workouts.

Republican Senate Majority Leader Mitch McConnell, who is leading the push for Trump's nominee to replace Ginsburg, was missing, though prominent Republican congressman Steve Scalise of Louisiana was there. 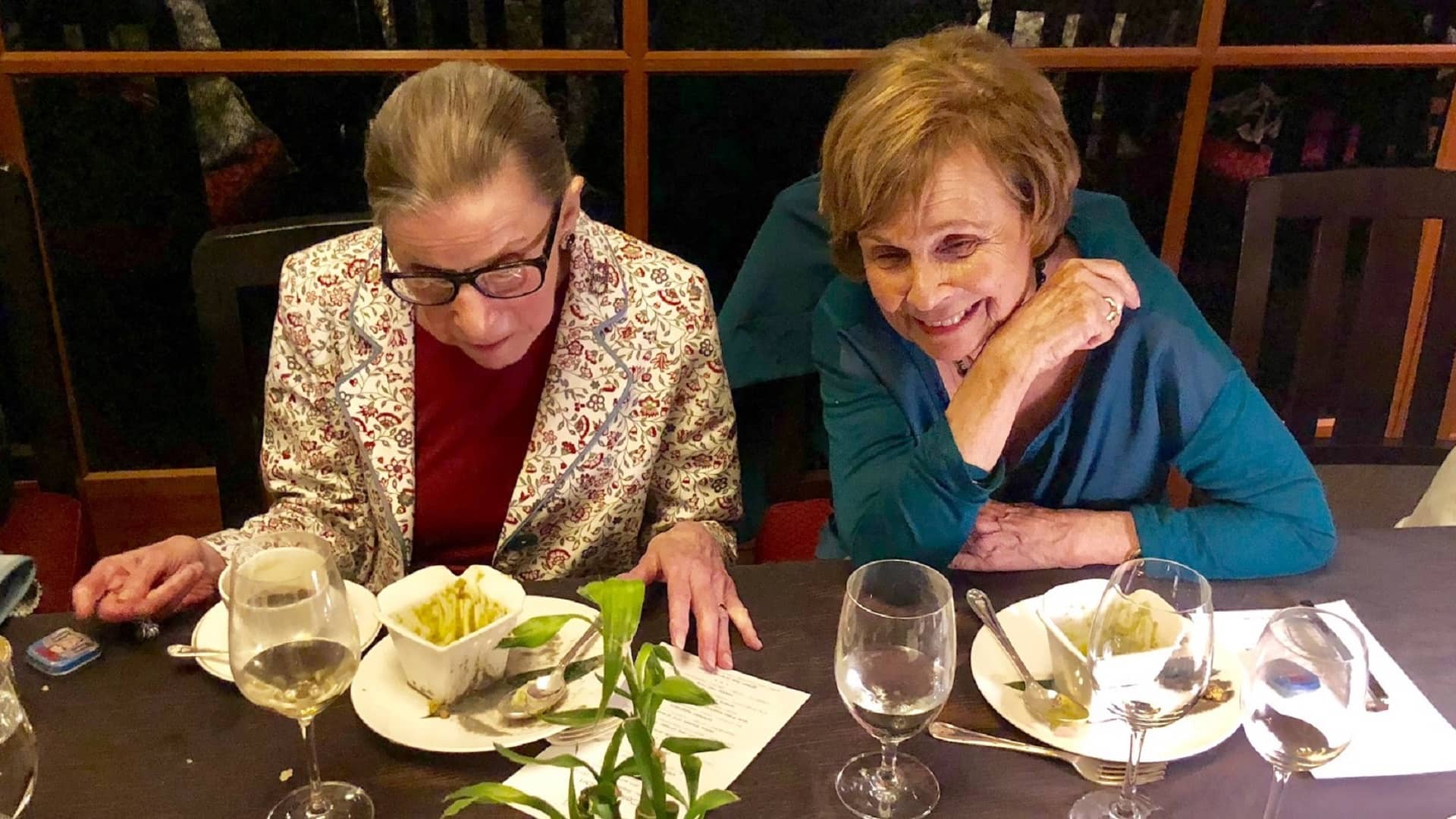 1 month ago
6:52
Nina Appel, former dean of the law school at Loyola University in Chicago, reflects on the trailblazing late U.S. Supreme Court Justice Ruth Bader Ginsburg, and her fears that her legacy might be overturned. 6:52

Members of the House and Senate who were not invited to the ceremony because of space limitations imposed by the coronavirus pandemic will be able to pay their respects before a motorcade carrying Ginsburg's casket departed the Capitol in the afternoon.

Ginsburg is also the first Jewish-American to lie in state and just the second Supreme Court justice to receive the tribute. The first, Chief Justice William Howard Taft, also had been U.S. president.

The honour of lying in state has been accorded fewer than three dozen times, mostly to presidents, vice-presidents and members of Congress. Rep. John Lewis, the civil rights icon, was the last person to lie in state following his death in July. Henry Clay, the Kentucky lawmaker who served as Speaker of the House and also was a senator, was the first in 1852.

Rosa Parks — a private citizen, not a government official — is the only woman who has lain in honour at the Capitol.

Ginsburg has lain in repose for two days at the Supreme Court, where thousands of people paid their respects, including President Donald Trump and first lady Melania Trump on Thursday. Spectators booed and chanted "vote him out" as the president, who wore a mask, stood silently near Ginsburg's casket at the top of the court's front steps.

Trump plans to announce his nomination Saturday of a woman to take Ginsburg's place on the high court, where she served for 27 years and was the leader of the liberal justices.

Ginsburg, the second woman to serve on the Supreme Court, will be buried next week in Arlington National Cemetery beside her husband, Martin, who died in 2010.