With greetings from Trump, Pence says U.S. committed to Europe

In Pence's first major foreign policy address for the Trump administration, he told European leaders that he spoke for Trump. Not everyone was reassured.

​U.S. Vice-President Mike Pence on Saturday brought a message of support for Europe from Donald Trump, but failed to wholly reassure allies worried about the new president's stance on Russia and the European Union.

In Pence's first major foreign policy address for the Trump administration, he told European leaders that he spoke for Trump when he promised "unwavering" commitment to the NATO alliance.

"Today, on behalf of President Trump, I bring you this assurance: the United States of America strongly supports NATO and will be unwavering in our commitment to this transatlantic alliance," Pence told the Munich Security Conference, offering  "greetings" from the president.

While Poland's defence minister praised Pence, many others, including France's foreign minister and U.S. lawmakers in Munich, remained skeptical that he had convinced his allies Trump would stand by Europe.

Trump's contradictory remarks on the value of the North Atlantic Treaty Organisation, skepticism over the 2015 deal to
curb Iran's nuclear ambitions, and an apparent disregard for the future of the European Union have left Europe fearful for the seven-decade-old U.S. guardianship of the West.

After Pence spoke, former NATO deputy secretary general Alexander Vershbow, who is American, summed up the mood, telling Reuters: "Many in this hall are still asking if this is the real policy."

Pence, whose meeting with German Chancellor Angela Merkel was described by German aides as "very friendly," also marked out a divide on Iran, which the European Union sees as a business opportunity following the nuclear deal.

Kelly said he would produce a "tighter, more streamlined version" soon, saying: "We need to find ways to vet in a more reliable way to satisfy us that people coming to the United States are coming for the right reasons."

French Foreign Minister Jean-Marc Ayrault expressed disappointment that Pence's speech did not mention the European Union, although the vice-president will take his message to EU headquarters in Brussels on Monday.

"I hope that we will have a clear response [in Brussels] ... because Donald Trump has said he was overjoyed by the Brexit and that there would be others," Ayrault said, referring to Britain's decision to leave the European Union.

"Looks like we have 2 governments," he wrote on Twitter. "@VP just gave speech about shared values btwn
US and Europe as @POTUS openly wages war on those values."

Pence, Trump's Defence Secretary Jim Mattis and his foreign minister Rex Tillerson all delivered messages of reassurance on their debut trip to Europe.

"I like a lot of what I heard from Vice-President Pence," Murphy told Reuters. "It's just hard to square that speech with everything Donald Trump is doing and saying," citing an assault on the free press.

The resignation of Trump's security adviser Michael Flynn over his contacts with Russia on the eve of the U.S. charm offensive in Europe also tarnished the message Pence, Mattis and Tillerson were seeking to send, officials told Reuters.

U.S. Republican Senator John McCain, a Trump critic, told the conference on Friday that the new president's team was "in disarray".

"This is President Trump's promise: we will stand with Europe today and every day, because we are bound together by the same noble ideals — freedom, democracy, justice and the rule of law," Pence said.

Pence received little applause beyond the warm reception he got when he declared his support for NATO. His warning that the "time has come to do more" on military spending was met with an awkward silence.

Pence's tough line on Russia, calling on Moscow to honour the international peace accords that seek to end the conflict in eastern Ukraine, were welcomed by Polish Defence Minister Antoni Macierewicz. Russian Foreign Minister Sergey Lavrov said after a meeting with his French, German and Ukrainian counterparts that there would be a new ceasefire from Feb. 20.

"Know this: the United States will continue to hold Russia accountable, even as we search for new common ground, which as you know, President Trump believes can be found," Pence said.

Pence later held an impromptu meeting with U2 front man Bono, who called the vice-president "the second busiest man on Earth."

Pence met with the Irish rock star along the sidelines of the conference. Bono offered his appreciation to the vice-president for meeting and noted that Pence had twice supported bills in Congress to provide AIDS medication to African nations.

Bono called it an "extraordinary historic accomplishment" and credited Pence with playing a "leading role." Reporters were then ushered away. 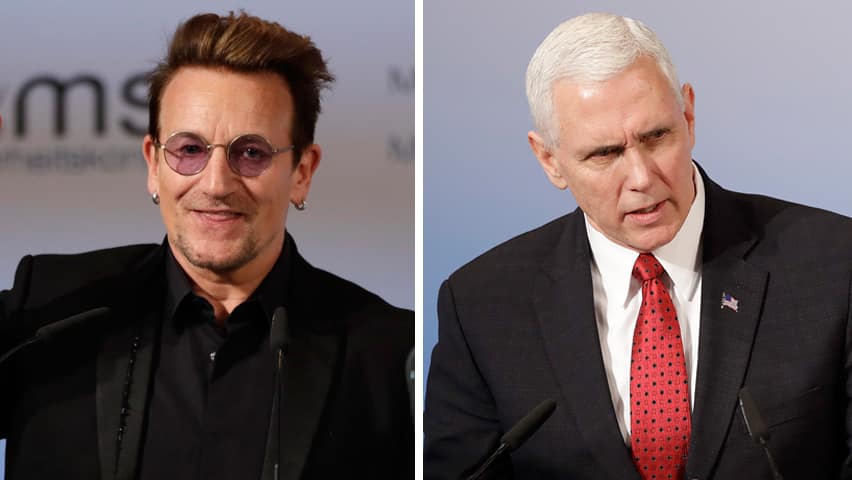 4 years ago
0:55
The leader of the musical act U2 praised Pence at a security conference in Munich. 0:55