French police will not shy away from enforcing a coronavirus lockdown in the high-rise Paris suburbs where unrest has erupted the past four nights, the interior minister said, as a motorcyclist whose run-in with officers sparked riots appealed for calm.

'Go home and calm down': motorcyclist in incident which helped spark protests appeals for calm 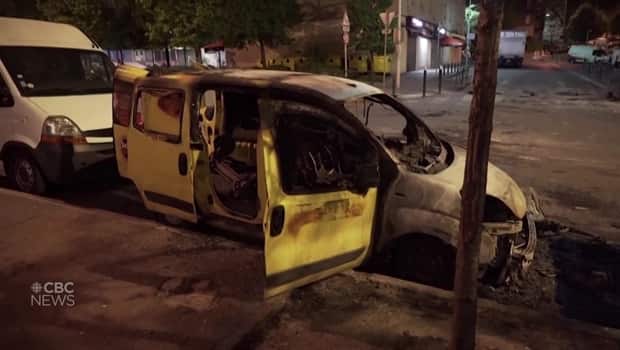 French police will not shy away from enforcing a coronavirus lockdown in the high-rise Paris suburbs where unrest has erupted the past four nights, the interior minister said, as a motorcyclist whose run-in with officers sparked riots appealed for calm.

Violence first flared on Saturday after the rider hurtled into the open door of an unmarked police car and required surgery to his leg. Some local residents alleged that officers deliberately opened the door into his path, and police have said an investigation is under way.

Interior Minister Christophe Castaner said those who flouted the lockdown were putting themselves at risk and promised to punish those who attacked the police.

"We will make sure the lockdown is respected everywhere," Castaner said at a senate hearing on Wednesday.

On Tuesday night, crowds of youths in Villeneuve-La-Garenne north of the capital torched cars and threw fireworks at riot police, social media footage showed. Officers swarmed into one housing estate as garbage from upturned bins burned around them, according to a Reuters witness.

"They're just people who want to defend themselves," one veiled woman shouted down to police from a balcony. "No one is listening to us."

In Nanterre, further to the west, the streets were littered with the charred remains of cars that had been set on fire. Unrest also broke out in the Clichy district just north of the Paris city boundary.

From his hospital bed, the motorcyclist called for calm.

"Go home and calm down. Justice will be served," he said in a video broadcast on Wednesday by French media.

The outbreak has hit the suburbs of the capital hard, with the combination of cramped social housing, workers with frontline jobs and a restless young generation turning some into infection hotspots.

France had documented nearly 21,000 coronavirus deaths and around 117,000 confirmed cases as of Tuesday evening.

The head of the largest police union, the SGP Unite, told Reuters on Tuesday the high-rise suburbs could "explode," drawing parallels between this week's unrest and the lead-up to riots 15 years ago that lasted three weeks.

A second police union, Alliance, has accused the government of trying to "buy a certain social peace" by failing to act against the minority who were stirring unrest and attacking officers.

"The police will not be the state's cannon fodder," it wrote in a letter made public late on Tuesday.

The interior ministry has previously said some of the people behind the unrest were connected to drug gangs, whose activities the lockdown had curtailed.