French President François Hollande is vowing to win his country's war against terrorism after attackers slit a priest's throat in an attack on a Normandy church.

One attacker ID'd as Adel Kermiche, whose family flagged authorities about radicalization 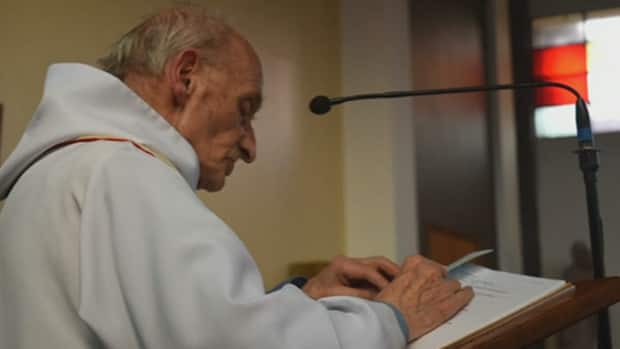 4 years ago
1:56
French President François Hollande is vowing to win his country's war against terrorism after two attackers slit a priest's throat in an attack on a Normandy church. 1:56

French President François Hollande is vowing to win his country's war against terrorism after two attackers slit a priest's throat in an attack on a Normandy church.

"To attack a church, to kill a priest, is to profane the republic," Hollande told the nation Tuesday night after speaking with Pope Francis, who condemned the killing in the strongest terms.

It is the latest of several addresses Hollande has made as France has been targeted by extremist attacks over the past 18 months.

Saying the country is "waging war," he urged his compatriots to stay united and not turn against each other.

"What terrorists want is to divide us, separate us, set us against each other," said Hollande.

Hollande said France has deployed more security measures than at any other time in its modern history, but insisted that it wouldn't go so far as to restrict freedoms and compromise democracy.

The Rev. Jacques Hamel was celebrating Mass for three nuns and two parishioners on a quiet summer morning in Saint-Etienne-du-Rouvray when the attackers burst in and forced the 85-year-old priest to his knees before slicing his throat, according to authorities and a nun who escaped.

Another person inside the church was seriously injured but is no longer in life-threatening condition, police said.

ISIS claimed responsibility for the attack, which would be its first attack against a church in the West.

There's no evidence yet ISIS directed the attack, although alleged assailant Adel Kermiche was arrested trying to go to Syria and was put under judicial supervision.

A police official and people who know Kermiche's family provided the name to The Associated Press.

The family friend says Kermiche had a sister who is a doctor in the nearby city of Rouen, and a brother. Their mother is a professor. The family alerted authorities to his radicalism to try to stop him from going to Syria, Sacarabany said.

The 19-year-old Kermiche was wearing an electronic surveillance bracelet which was deactivated for a few hours every morning, corresponding with the time of the attack, an officer familiar with the investigation told the AP.

Both Kermiche and the other assailant, yet to be identified, were killed by police. A 16-year-old has also been detained as French police begin the all-too familiar exercise of conducting post-attack raids.

Molins said Kermiche was arrested in Germany in March 2015 trying to join extremists in Syria using his brother's ID, and then was arrested in Turkey two months later using a cousin's ID.

A statement published by the IS-affiliated Amaq news agency said Tuesday's attack was carried out by "two soldiers of the Islamic State" who acted in response to calls to target nations in the U.S.-led coalition fighting the extremist group in Iraq and Syria.

Haras Rafiq, managing director of the Quilliam Foundation, described the attack as a turning point. "What these two people today have done is ... shifted the tactical attack to the attack on Rome ... an attack on Christianity," he said.

He warned that it could "radicalize people from both sides of the communities. Muslim and non-Muslim."

A nun who was in the church at the time said Hamel was forced to the ground before his throat was slit.

"They forced him to his knees. He wanted to defend himself. And that's when the tragedy happened," said the nun, identified as Sister Danielle.

"They recorded themselves. They did a sort of sermon around the altar, in Arabic. It's a horror," she told BFM television.

Police managed to rescue the only three other people inside the church at the time.

The slain priest had been at the church for the past decade and "was always ready to help," said Rouen diocese official Philippe Maheut.

"His desire was to spread a message for which he consecrated his life," Mahut told The Associated Press. "And he certainly didn't think that consecrating his life would mean for him to die while celebrating Mass, which is a message of love."

A martyr looks like this.<br>Fr Jacques Hamel, killed while celebrating Mass, <br>like Thomas of Becket and Oscar Romero. <a href="https://t.co/bjIsbim4O7">pic.twitter.com/bjIsbim4O7</a>

The Vatican spokesman, the Rev. Federico Lombardi, said in a statement that Pope Francis expressed his "pain and horror for this absurd violence, with the strongest condemnation for every form of hatred and prayer for those affected."

The attack will heap yet more pressure on Hollande to regain control of national security, with France already under a state of emergency 10 months ahead of a presidential election.

Hollande paid a visit earlier in the day to Saint-Etienne-du-Rouvray with Interior Minister Bernard Cazeneuve.

Cazeneuve has come under fire from Conservative politicians for not doing enough to prevent the Bastille Day Nice attack. French lawmakers approved a six-month extension of emergency rule after the July 14 attack while the Socialist government also said it would step up strikes against ISIS in Iraq and Syria.