Esteban Santiago, the Iraq war veteran accused of killing five travellers and wounding six others at a busy international airport in Florida, was charged Saturday and could face the death penalty if convicted.

The Iraq war veteran accused of killing five travellers and wounding six others at a busy international airport in Florida was charged Saturday and could face the death penalty if convicted.

Esteban Santiago, 26, told investigators that he planned the attack, buying a one-way ticket to the Fort Lauderdale airport, a federal complaint said. Authorities don't know why he chose his target and have not ruled out terrorism.

Santiago was charged with an act of violence at an international airport resulting in death — which carries a maximum punishment of the death penalty — and weapons charges.

"Today's charges represent the gravity of the situation and reflect the commitment of federal, state and local law enforcement personnel to continually protect the community and prosecute those who target our residents and visitors," U.S Attorney Wifredo Ferrer said.

Authorities said during a news conference that they had interviewed roughly 175 people, including a lengthy interrogation with the cooperative suspect, a former National Guard soldier from Alaska. Flights had resumed at the Fort Lauderdale airport after the bloodshed, though the terminal where the shooting happened remained closed.

Santiago spoke to investigators for several hours after he opened fire with a Walther 9mm semi-automatic handgun that he appears to have legally checked on a flight from Alaska. He had two magazines with him and emptied both of them, firing about 15 rounds, before he was arrested, the complaint said.

"We have not identified any triggers that would have caused this attack. We're pursuing all angles on what prompted him to carry out this horrific attack," FBI Agent George Piro said.

He is being held without bail and is scheduled to make his first court appearance Monday.

Investigators are combing through social media and other information to determine Santiago's motive, and it's too early to say whether terrorism played a role, Piro said.

The head of the field office for the FBI in Anchorage, Alaska, confirmed Saturday afternoon that Santiago walked into their office in November 2016 complaining that his mind was being controlled.

The FBI office interviewed him and then notified local police, who took him in for a mental health evaluation.

"He was a walk-in complaint. This is something that happens at FBI offices around the country every day," Ritzman said.

He told the agents that the government was forcing him to watch ISIS (Islamic State in Iraq and Syria) videos.

"He said he was was having terroristic thoughts and believed he was being influenced by ISIS," said Anchorage Police Chief Chris Tolley on Saturday.

Loaded gun and newborn in his vehicle

At the time, Santiago had a loaded gun in his vehicle, as well as his newborn, Ritzman added.

Ritzman said local police took Santiago's gun and called his girlfriend to pick up the baby. Police brought him for an assessment at a mental health facility. Ritzman would not release any details of that assessment.

The local police said he came to their office to pick up his gun on Dec. 8. They said they do not know whether the gun is the same one that was used in the shooting in Florida. 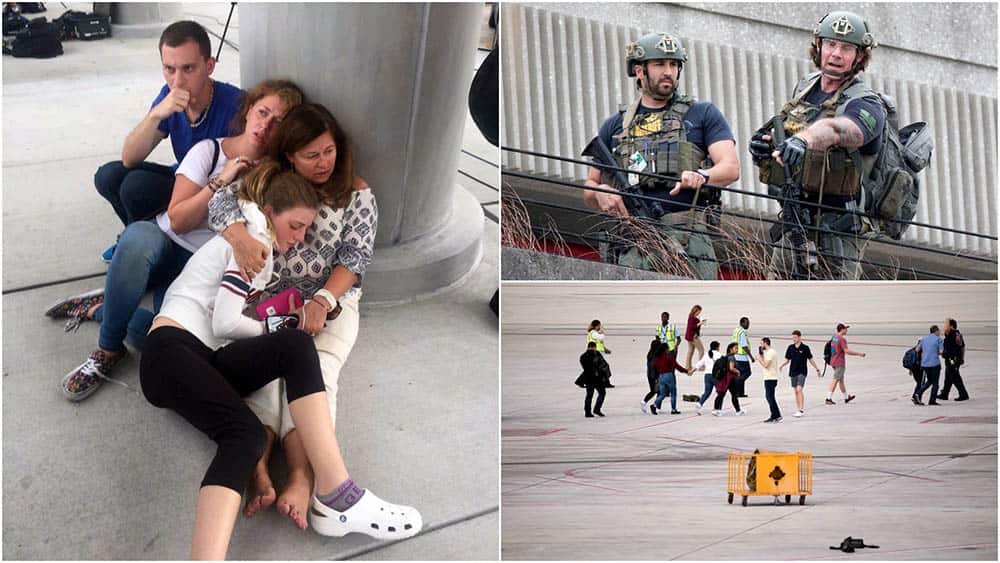 Santiago had also had several run-ins with the police in Anchorage throughout 2016.

Tolley told reporters Saturday afternoon that between January and October, police were called about Santiago five times for problems such as a "physical disturbance," domestic violence and once about an allegation of strangulation. Santiago was arrested for criminal mischief once.

Tolley said he was not charged in the other incidents because police said there was no cause for arrest.

Police and the FBI stressed that there are no laws that would have prohibited Santiago from owning firearms, despite his troubles with law enforcement and his mental health issues.

U.S. Attorney Karen Loeffler added that Santiago would have been able to legally possess a gun because he had not been judged mentally ill, which is a higher standard than having an evaluation.

Santiago had not been placed on the U.S. no-fly list and appears to have acted alone, authorities said.

He said Esteban had trouble controlling his anger after serving in Iraq and told his brother that he felt he was being chased and controlled by the CIA through secret online messages.

He said his brother was released from the mental health facility without any follow-up medication or therapy.

"The FBI failed there," Bryan Santiago told The Associated Press. "We're not talking about someone who emerged from anonymity to do something like this."

Speaking in Spanish outside his family's house in Penuelas, Puerto Rico, the brother said: "The federal government already knew about this for months, they had been evaluating him for a while, but they didn't do anything."

In recent years, Esteban Santiago had been living in Anchorage, Alaska. But there were signs of trouble.

They have set up a tip hotline for anyone with information about the investigation. 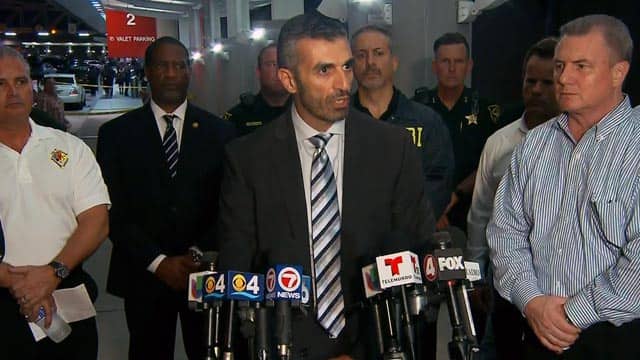 4 years agoVideo
6:41
Police in Florida have a suspect in federal custody following a shooting at the Fort Lauderdale-Hollywood International Airport that killed five people and injured eight 6:41

The Associated Press earlier reported that Santiago was charged in a domestic violence case in January 2016, damaging a door when he forced his way into a bathroom at his girlfriend's Anchorage home. The woman told officers he yelled at her to leave, choked her and smacked her on the side of the head, according to charging documents.

A month later, municipal prosecutors said he violated the conditions of his release when officers found him at her home during a routine check. He told police he had lived there since he was released from custody the previous month. His Anchorage attorney, Max Holmquist, declined to discuss his client.

Bryan Santiago said his brother had requested psychological help but barely received any.

"I told him to go to church or to seek professional help," he said.

He was born in New Jersey but moved to Puerto Rico when he was two years old, his brother said. He grew up in Penuelas before joining the Puerto Rico National Guard in 2007.

He deployed in 2010 as part of the Guard, spending a year with an engineering battalion, according to Guard spokesman Maj. Paul Dahlen.

Esteban Santiago's mother wiped tears from her eyes as she stood inside a screen door Saturday. She said her son had been tremendously affected by seeing a bomb explode near two friends while serving in Iraq.

Former neighbour Ursula Candelario in Penuelas recalled seeing Esteban Santiago grow up and said people used to salute him after he joined the Guard.

"He was very peaceful, very educated, very serious," she said. "We're in shock. I couldn't believe it." 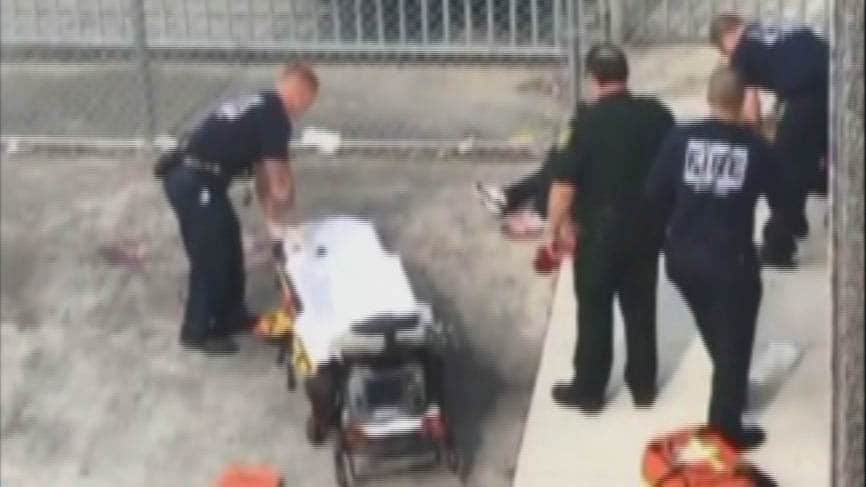 Since returning from Iraq, Santiago served in the Army Reserves and the Alaska National Guard in Anchorage, Olmstead told AP. He was serving as a combat engineer in the Guard before his discharge for "unsatisfactory performance." His military rank upon discharge was E3, private 1st class, and he worked one weekend a month with an additional 15 days of training yearly, Olmstead said.

She would not elaborate on his discharge. The Pentagon said he went AWOL several times and was demoted and discharged.

While it is unclear if Esteban Santiago had been diagnosed with post-traumatic stress disorder, as many as one in five veterans who served in Iraq or Afghanistan develop the affliction each year, according to the U.S. Department of Veterans Affairs. A 2014 Veterans Affairs study found that almost 30 per cent of veterans returning from Iraq and Afghanistan who sought treatment at veterans' hospitals were diagnosed with PTSD symptoms.

His uncle and aunt in New Jersey were trying to make sense of what they were hearing about Santiago. FBI agents arrived at their house to question them on Friday.

Maria Ruiz told The Record newspaper that her nephew had recently become a father to a son and was struggling.

"It was like he lost his mind," she said in Spanish of his return from Iraq. "He said he saw things."

Santiago was flying from Anchorage on a Delta flight and had checked only one piece of luggage, which contained the gun.

Piro said the attacker appears to have followed federal rules when he checked his firearm in his baggage. It is legal for airline passengers to travel with guns and ammunition as long as the firearms are put in a checked bag — not a carry-on — and are unloaded and locked in a hard-sided container.

Guns must be declared to the airline at check-in. Florida Congresswoman Debbie Wasserman Schultz said those rules should be re-evaluated in light of Friday's attack.

"I do think we need to take a hard look at the security around baggage claims areas," she told reporters Saturday.

with files from CBC News and Reuters