Three years after they were sent halfway across the continent, aging elephants from the Toronto Zoo are enjoying spending time with new friends and roaming the hills of a northern California sanctuary.

For Toka and Thika, retirement is turning out just fine. There's warm sunshine, new friends to spend time with and the chance to do whatever they want.

Three years after they were sent halfway across the continent, the aging elephants from the Toronto Zoo have found a new lease on life roaming the hills of a northern California sanctuary.

"Toka has fit right in and she is a part of the group now and I think that's really good for her," Ed Stewart, executive director of the Performing Animal Welfare Society (PAWS) sanctuary, told CBC's the fifth estate.

"Thika is a much bigger challenge but it's been good for her, too."

After much debate and controversy surrounding the fate of the zoo's last elephants, Toka, Thika and Iringa were trucked 4,000 kilometres to the PAWS sanctuary in San Andreas.

the fifth estate was along on that three-day trip in October 2013.

The move saw the female African elephants go from wandering in a space less than 0.8 hectares in size — much of it on a concrete pad — to a larger savannah-like landscape of rolling hills and vegetation set aside for animals retired from zoos and circuses.

More than 36 hectares of the sanctuary's 930 hectares are reserved for female African elephants.

'Ate every bit of it'

"Toka and Iringa immediately discovered grazing," said Stewart. "They walked past a small patch of grass and both stopped and ate every bit of it."

Even though Iringa was the oldest of the three Toronto elephants, she seemed the most eager in their new environment.

"Funnily enough, Iringa was the boldest of all," Stewart told the fifth estate's Bob McKeown when he returned to see how the elephants were doing last year.

"It almost looked like she looked back at us and said, 'OK, I get it, I get it. I can go anywhere I want here, I can eat the leaves, I can eat the grass, and I'll see you later.'"

Iringa seemed to revel in her new home. But her death at age 46 in July 2015, when she was euthanized after a history of degenerative foot and joint disease, wasn't totally unexpected.

"She was the older of the animals," said Julie Woodyer, a driving force behind the relocation and campaigns director for Zoocheck Canada, an animal rights charity.

"She had lived in this cold climate for a long time and had some health problems as a result of living here all those years, so it really wasn't a surprise."

While Toka and Iringa settled right in after their arrival, Thika's relocation presented a greater challenge.

Adjusting to a new environment

The other two elephants had been born in the wild in Africa and had exposure to both a family and a hierarchical social structure within their herd.

Thika, on the other hand, was born at the Toronto Zoo in 1980. After her mother died, Thika was left to grow up within the limited social and physical environs of the elephant compound.

When it came to adjusting to and interacting with other elephants in the new environment of the PAWS sanctuary, she was challenged and intimidated.

"A lot of times in captivity the elephants understand the humans," said Stewart.

"Sometimes they don't understand their normal relationship to other elephants and … you can just see some confusion."

So PAWS takes it slowly in its efforts to help the animals get used to being with other elephants and doing whatever elephants would naturally do.

Almost three years after Thika's arrival at PAWS, she was still being kept separated from her would-be family.

Contemplating how to help her more fully integrate with the other elephants — animals that are sociable, intelligent but unpredictable — raised all sorts of challenges.

Stewart said any miscalculation could be a matter of life or death.

"The mistakes could be anything from an elephant being mentally damaged, just worried about another elephant hurting her or chasing her or just ... mental stress," Stewart told the fifth estate.

"And then there's physical injury … one of the elephants could injure another elephant."

Yes, Stewart said, "it's happened before."

The first time Thika was let in with the other elephants at PAWS, they took off, fleeing up a hill and out of sight.

Other attempts were more successful. One day last July, Thika was let in again and moved toward the other female African elephants. Key to the whole endeavour was how she would interact with Mara, the matriarch of the PAWS family.

Everything went OK, with Mara approaching her.

Thika and Mara have since become friends.

Another marker of successful integration comes with a test of whether all the elephants will eat together.

"It's called co-operative feeding," said Stewart. "It's a way of socializing them, and so they all know everybody's going to get something, everything is good."

She was at the sanctuary last fall and tears came to her eyes when she saw Thika and Toka. 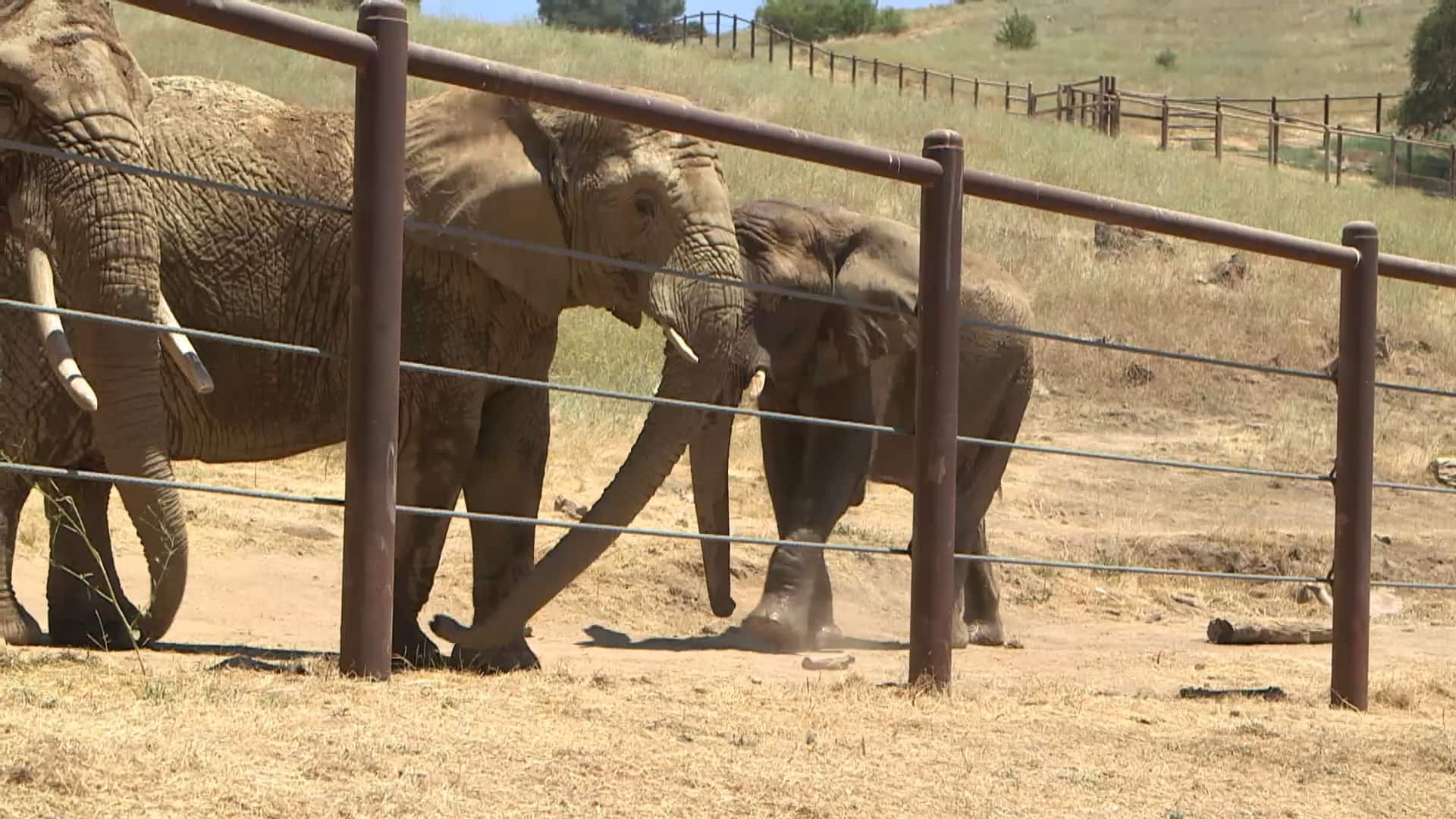 "Yes, they're still in a captive environment. It's not perfect, but from a captivity perspective, it's the closest they're going to get to living in the wild."

That opportunity to give the elephants something as close as possible to a natural state is also vital for Stewart.

"The only thing we've tried to do is give them an opportunity to act like an elephant."

So they eat some grass. Go in the pond and wallow in the mud. Walk up and down the hill.

"Moments like this are really nice," Stewart said during the visit with the fifth estate.

"You could take a picture of them and it would look like they were where they should be … you live for short moments where you actually succeeded at giving them something natural."