A popular coach, a dancer, a would-be collegiate swimmer and a merit scholarship winner were among those killed in the deadliest high school shooting in U.S. history.

3 staff members, students of all ages among dead in worst high school shooting in U.S. history

The Associated Press · Posted: Feb 15, 2018 7:13 AM ET | Last Updated: February 17, 2018
A popular coach, a dancer, an aspiring collegiate swimmer and a merit scholarship winner were among the 17 people who died in Wednesday's shooting at a secondary school in Parkland, Fla. — the deadliest high school massacre in U.S. history. 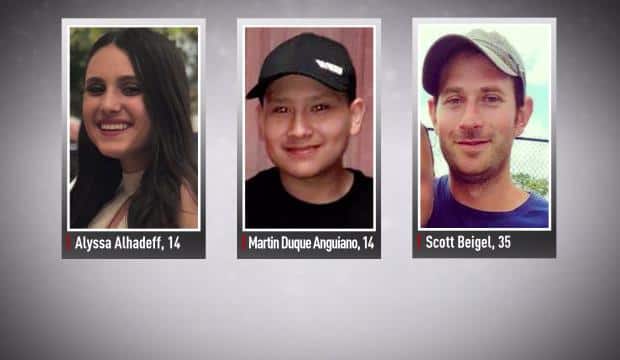 17 lives cut short: Who were the Florida school shooting victims?

"He died a hero and he will forever be in our hearts and memories," the football program at Marjory Stoneman Douglas High School tweeted of assistant coach Aaron Feis.

Feis graduated from the school in 1999 and worked mainly with the junior varsity team, the website for the school's football team said. He lived in nearby Coral Springs with his wife and daughter, and spent his entire coaching career at Marjory Stoneman Douglas.

Local Broward County newspaper the Sun Sentinel reported that Feis, who also worked as a school security guard, responded to the original call on a school walkie-talkie Wednesday. Someone on the radio asked if loud sounds they heard were firecrackers, said football coach Willis May, who also carries a radio.

"I heard Aaron say, 'No, that is not firecrackers.' That's the last I heard of him," May said.

Authorities said Thursday that all of the families of the 17 victims have been notified.

Chris Hixon, a 49-year-old married father of two, was also among those killed, the Archdiocese of Miami confirmed Thursday.

The athletic director at the school, Hixon wasn't shy about jumping in wherever he was needed, said friend and one-time colleague Dianne Sanzari. When the school needed someone to patrol the campus and monitor threats as a security specialist, Hixon took over.

It was in that security role that Hixon apparently came within range of the shooter. "He loved his family, he loved his job," Sanzari said. "Chris was just amazing."

Students said geography teacher Scott Beigel, 35, helped them enter a locked classroom to avoid the gunman and paid for the brave act with his life.

"If the shooter would have come into the room, I probably wouldn't be speaking to you now," student Kelsey Friend told ABC's Good Morning America. Facebook friends remembered Beigel as "an inspiration to me" and "my hero."

Eighteen-year-old Meadow Pollack was also killed, her father Andrew Pollack confirmed to the Palm Beach Post Thursday. Her parents called her phone repeatedly only to hear it ring unanswered, as they kept an anxious vigil outside the hospital.

Family friend Adam Schachtel said in a Facebook post that "an angel was taken away from us in that horrific tragedy … no words can be said so just prayers and sadness."

Among the youngest victims was Alyssa Alhadeff, an avid soccer player whose mother demanded on CNN that U.S. President Donald Trump take action.

"I just spent the last two hours putting the burial arrangements for my daughter's funeral, who is 14. Fourteen. President Trump, please do something. Do something. Action. We need it now." 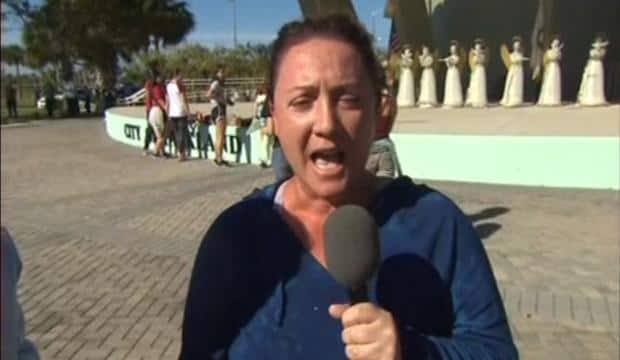 Later, on her Facebook page, she urged people to kiss their children, and "Live for Alyssa! Be her voice and breathe for her."

Alaina Petty, 14, was also killed, her family confirmed in a statement.

"It is important to sum up all that Alaina was and meant to her family and friends. Alaina was a vibrant and determined young woman, loved by all who knew her. Alaina loved to serve," the statement read. It also said she had joined volunteers who "rushed to the most heavily impacted areas of Florida to clean up and help rebuild the lives of those devastated by Hurricane Irma. Her selfless service brought peace and joy to those that had lost everything during the storm."

Jaime Guttenberg, a Grade 9 student, loved to dance and hoped to become an occupational therapist and mother.

In a written statement to The Associated Press, her aunt, Abbie Youkilis, said the 14-year-old "was a pretty girl with the world's best smile and her soul was sensitive and compassionate."

Guttenberg leaves her parents, Fred and Jennifer Guttenberg, and brother Jesse. Her father said in a Facebook post that he is "trying to figure out how my family gets through this."

Youkilis called for gun-control legislation, saying Jaime's parents were "the world's most loving and over-protective parents but they could not protect Jaime from the sickness that has gripped our country."

Joaquin Oliver was known by his nickname Guac, short for "guacamole," because many couldn't pronounce his first name.

"My friend will literally never get to say, 'I graduated high school,"' said Tyra Hemans, a 19-year-old who said she had been friends with Oliver since they were in Grade 9.

Hemans said she last saw her friend at school the day of the shooting.

"It was just a brief 'Happy Valentine's,`'' she said. "He was with his girlfriend and I was just like, 'Oh my God, you guys are so cute.'"

She added, "He's just a goofball. He's the only kid you'd know that would dye his hair bleach-blond, walk around school, put some tiger stripes in and just be unique. He was a unique soul."

Nicholas Dworet, a 17-year-old star athlete, loved swimming. His talent and skills landed him a swimming scholarship to the University of Indianapolis.

In a statement, the university's swimming coach Jason Hite called Dworet an "energetic and very vibrant kid" who cheered for his soon-to-be university during a swimming meet last month.

"I spoke with his mom this morning, and she reiterated the fact that he was really looking forward to this next step in his life and becoming a Hound," said Hite.

"He really felt like he had a family in the team, and was really excited about what we're doing up here."

Peter Wang, a 15-year-old student who was also in the Junior Reserve Officers' Training Corps — a U.S. army program — wasn't interested in status but wanted to help others, relatives said.

Friends and relatives first thought Wang was just missing and checked with area hospitals. They later found out he had been killed.

Luke Hoyer's parents, Gena and Tom Hoyer, searched for their son at hospitals before finally going to the law enforcement command centre, where they eventually learned he had died, said his aunt Joan Cox.

Cox said Hoyer, 15, was a loving, sweet person who loved basketball and "smiled all the time."

"He was just a good kid … very loving and just enjoyed life.

"It's just a terrible thing," said Cox, who said the family — including Luke's older sister Abby and brother Jake — spent Christmas with her and other family in South Carolina. "We just all pretty much can't get over it."

Victim Gina Montalto was a 14-year-old Grade 9 student who participated on the winter colour guard squad at the school.

"She was a smart, loving, caring, and strong girl who brightened any room she entered. She will be missed by our family for all eternity," said the post.

One of Montalto's colour guard instructors from middle school, Manuel Miranda, told the Miami Herald that Montalto was "the sweetest soul ever."

"She was kind, caring always smiling and wanting to help," Miranda said.

Briones said he last saw Martin the day of the shooting during first period.

"We were just playing around, talking about jokes and stuff," said Isaac, who was outside the school Thursday with others holding a group of white balloons for the victims.

Carmen Schentrup was a smart girl with a sweet smile.

In September, she was named one of 53 National Merit Scholarship Program semifinalists. A classmate tweeted "we all praised for her intelligence."

Cousin Matt Brandow posted on Facebook that the 16-year-old visited Washington state recently and said she wanted to go to the University of Washington. He asked: You like the rain?

"She answers, I hate sweating in the humid Florida weather," Brandow wrote.

"That's when I knew [she was] perfect for Washington."

For her part, Helena Ramsay was soft-spoken, but also smart and a go-getter, her cousin Sefena Cooper said.

The 17-year-old Grade 11 student especially loved hanging out with friends and family, "and for this to happen is heartbreaking," Cooper said.

"Although somewhat reserved, she had a relentless motivation towards her academic studies and her soft warm demeanour brought the best out in all who knew her," another relative, Curtis Page Jr., wrote on Facebook.

Trombone and baritone player Alex Schachter was a "sweetheart of a kid," according to a social media post by father Max Schachter.

In honour of his 14-year-old son, Schachter wrote on a GoFundMe page that he was starting a scholarship fund "to help other students experience the joys of music as well as fund increased security at schools."

Cara Loughran, 14, was an excellent student who loved the beach and her cousins, according to her family.

An aunt, Lindsay Fontana, wrote on Facebook: "I had to tell my 8-year-old daughters that their sweet cousin Cara was killed in the shooting at Stoneman Douglas High School yesterday. We are absolutely gutted."

"While your thoughts are appreciated, I beg you to DO SOMETHING," she wrote. "This should not have happened to our niece Cara and it cannot happen to other people's families."

Loughran's neighbour posted a picture of her cheering on a young boy riding a bike with training wheels.

"RIP Cara," Danny Vogel wrote, "and fly with the angels. You will be greatly missed, and we will always love you and celebrate your beautiful life."