Peter Strzok defended himself, FBI against claims of anti-Trump bias by Republicans

The cameras were on, and the theatrics were high.

Democrats threw their support behind Strzok with gusto. At one point, Democratic Rep. Ted Lieu of California chimed in, saying, "This is a stupid and ridiculous hearing."

But despite the partisan hubbub, the stakes were high.

Strzok is in the hot seat because he helped steer two politically charged investigations, into Hillary Clinton's email use and possible co-ordination between the Trump campaign and Russia. He was removed from the Russia investigation last year after the texts were discovered.

An internal FBI report released last month found no evidence of political bias in the FBI's decision not to pursue criminal charges against Clinton. But House Republicans remain unconvinced.

Here are some takeaways from the all-day hearing:

Finally able to defend himself after months of angry criticism from President Donald Trump and Republicans, Strzok was mostly unapologetic.

He defended himself forcefully and doubled down on some of his most controversial comments in the texts, which he exchanged with FBI lawyer Lisa Page during the presidential campaign. Strzok and Page were having an extramarital affair at the time.

Ex-FBI LAYER Lisa Page today defied a House of Representatives issued Subpoena to testify before Congress! Wow, but is anybody really surprised! Together with her lover, FBI Agent Peter Strzok, she worked on the Rigged Witch Hunt, perhaps the most tainted and corrupt case EVER!

On Thursday, Republicans disputed his contention that he wasn't biased and that his views didn't affect the investigation. One lawmaker said he was lying and another said he didn't believe him. Republican Rep. Louie Gohmert of Texas got personal, calling out his relationship with Page, which was noted in the inspector general report.

"I can't help but wonder when I see you looking there with a little smirk, how many times did you look so innocent into your wife's eyes and lie to her about Lisa Page?" Gohmert asked.

Strzok shot back, saying the question revealed more about Gohmert's character than his own.

Strzok expressed little regret for the most controversial text exchange with Page. In the text, Page says Trump is "not ever going to become president, right? Right?!"

Strzok replied that Trump won't. "We'll stop it," he said.

On Thursday, Strzok said the message was written late at night after Trump's campaign comments disparaging a slain U.S. soldier.

"It was in response to a series of events that included then-candidate Trump insulting the immigrant family of a fallen war hero and my presumption, based on that horrible, disgusting behaviour, that the American population would not elect somebody demonstrating that behaviour to be president of the United States," Strzok said. 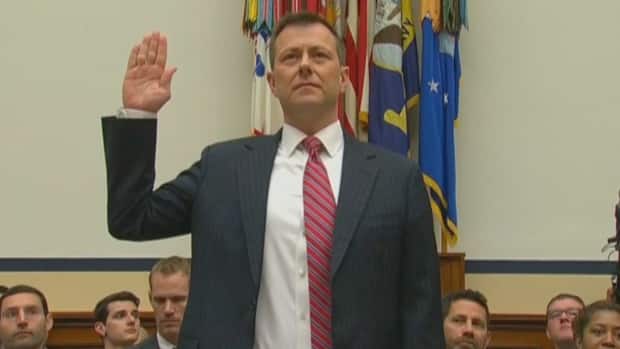 3 years agoVideo
2:36
'At no time in any of these texts did those personal beliefs ever enter into the realm of any action I took,' Strzok said. 2:36

But while reinforcing his dislike for Trump, Strzok repeated several times that he did not believe that the messages showed bias, to the frustration and disbelief of Republicans.

"Every American, every single one, has a political belief," Strzok said, and the vast majority of those don't constitute bias.

He said bias means that you let those opinions get in the way of the work, and he did not do that.

The hearing represented a public culmination of a months-long campaign by House Republicans who are critical of the Justice Department and FBI. Most of the committees' investigation has so far happened behind closed doors, with lawmakers unable to question witnesses in public.

Republicans yelled at Strzok and pointed fingers at him, making it clear they did not believe him. California Rep. Darrell Issa made Strzok read out his own texts, including some with profane language and one that calls Trump a "disaster."

"Mr. Strzok, are you starting to understand why some folks out there don't believe a word you say?" said Rep. John Ratcliffe of Texas.

House Judiciary Committee Chairman Robert Goodlatte of Virginia held open the possibility that the panel would still hold Strzok in contempt because he wouldn't answer questions about the ongoing Russia investigation.

Democrats upped the drama as well, yelling at the Republicans throughout the hearing. Maryland Rep. Elijah Cummings, the top Democrat on the oversight panel, had aides hold up posters of everyone who has pleaded guilty in the special counsel Robert Mueller's investigation.

The Democrats repeatedly called the hearing a farce designed to undermine Mueller, protect Trump and sway public opinion against the FBI as it investigates Trump's campaign and whether he obstructed justice.

"This is about promoting a narrative, you're a prop," said Rep. David Cicilline of Rhode Island. He said Strzok's texts were "the perfect foil" for Republicans.

"They aren't interested in hearing your context and explanation," Cicilline said. "Because it's not about you."

As Republicans asked multiple questions about the Russia probe, Strzok repeated that he would like to answer the question, "but at the direction of the FBI, because it relates to an operational matter, I can't."

He also said — more than once — that it was more frustrating for him than it was for lawmakers, suggesting he feels like there is more information that could help him clear his name.

"I am certain that Congress will have the opportunity to look at any investigation once it is closed," he said.