As the criminal trial of four men charged with the destruction of Flight MH17 begins in the Netherlands, victims' families demand the Kremlin’s highest representatives be held responsible.

The prisoner's box will be empty of 4 men on trial, but victims' families hope to hold Russia accountable

Silene Fredriksz knows she may never see the day the four men accused of murdering her son Bryce and 297 others on board Malaysian Airlines Flight 17 are sent to prison.

But she says if their trial, which begins Monday in a Dutch court outside of Amsterdam, discredits five and a half years of Russian "lies" about the Putin government's role in the jet's destruction, then the effort will have been worthwhile.

"I think it's very offensive. Russia is telling lies again and again and denying things that we know are true," Fredriksz told CBC News in an interview in her home in Rotterdam.

"Maybe, the world will finally see how Russia really is."

The proceedings will unfold in a high security court judicial complex near Schiphol airport. However, the prisoner boxes will be empty with the suspects living freely thousands of kilometres away.

They're accused of bringing a Russian surface-to-air BUK missile across the border from Russia, and then, after the missile was launched, covering up the BUK's return back into Russian territory. Investigators believe evidence tying them to the movement of the missile is strong and, as separatist leaders, they would have been responsible for weapons in their zone.

Russia's government is refusing to turn them over to be tried for shooting down the jet and killing everyone on board.

On the eve of what's expected to be the start of months — if not years — of legal arguments and testimony, Fredriksz met with our CBC News team to talk about the trial, her family, and Russia's efforts to discredit the investigation.

Fredrikz showed us her son's room in her house, which remains untouched from the day Bryce, who was 23, and his girlfriend, Daisy, left on their trip.

A half-drunk bottle of 7-Up is still on his desk. A summer shirt thrown over the back of a chair remains exactly as he left it. Even the bed is still unmade from the last morning the couple woke up.

"This is all we have got, that's why I keep it like this. I don't know for how long. As long as I feel I want to keep it this way," she said.

Personal items from the wreckage

Among the plane's wreckage, investigators recovered and gave back to the family a cloth purse of Daisy's which was still intact and, incredibly, undamaged.

It contained a change of clothes for each of them as well as other items, such as phone chargers and a tourism brochure for a dive shop in Bali where they were heading.

"It's still hard for me to go back to my memories. I can laugh ... but on the other hand it still hurts because I know it's in the past and I know there is no future with my son," she said.

"Him playing football all the time and arguing with ... his dad about politics or football. There was always music in the house. I miss that. I miss everything little thing." 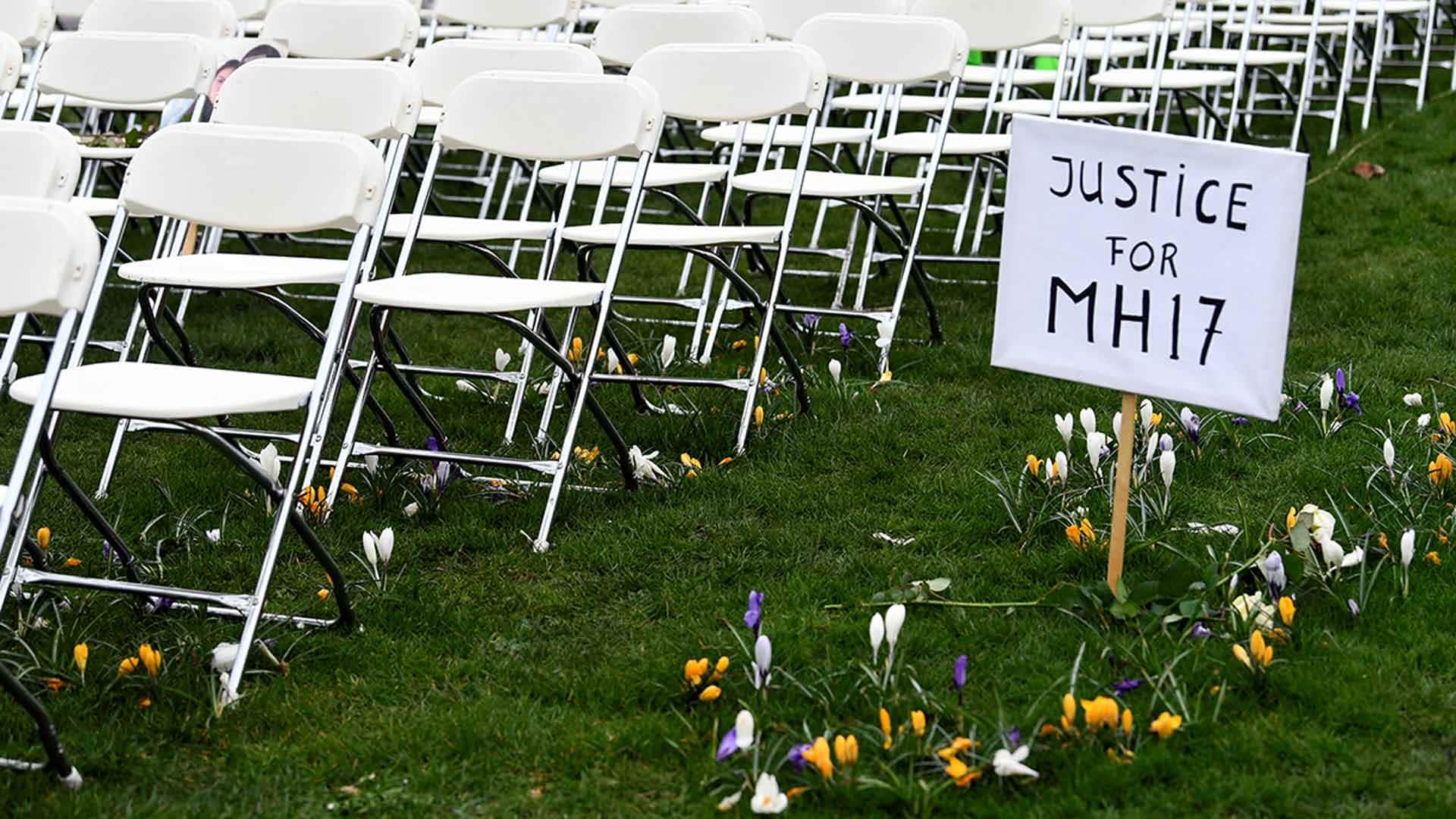 9 months agoVideo
2:02
None of the suspects is attending the trial about the crash of MH17, which investigators say was shot down by a missile launcher from Russia. 2:02

The criminal trial is the culmination of painstaking detective and forensics work by a five-country investigation team, led by Dutch justice officials.

While there were passengers from 10 nationalities on board the jet, including Canadian medical student Andrei Anghel, the majority — 196 — were Dutch.

Investigators worked through extremely challenging conditions, including dealing with a crash site in a war zone and what they have repeatedly characterized as an unco-operative Russian government.

Russia has strenuously denied the BUK was theirs, and has offered an ever-changing series of alternate explanations for the destruction of the plane, all of which the investigation team says are unfounded.

Then, and now, that region of Eastern Ukraine was under the control of separatist militia units supported by Russia.

Russia has never acknowledged its help to Ukrainian separatists and repeatedly denied accusations that its military forces and soldiers have crossed the border.

Fessing up to even partial responsibility for the jet's destruction — much less offering an apology to the victim's families — would amount to the Putin government admitting that it has been lying to the world and its own people for years, as well as violating international law.

Still, prosecutors have amassed what they claim is formidable evidence of Russian help to the separatist forces.

In a news conference last year, they played recordings of phone calls where voices purportedly to be of separatist commanders can be heard talking to senior Kremlin officials about the logistics and progress of the war.

In another phone call, one of the accused, Sergey Dubinsky, is heard asking Moscow to send a BUK to help reinforce his fighters.

"I am absolutely sure that [President Vladimir] Putin knew there was a BUK going to Ukraine. He knew this; 100 per cent sure," Fredriksz told CBC News.

"To me, personally, I keep him mainly responsible for making this happen."

"The media campaign is gaining unprecedented momentum, with a clear accusatory bias toward Russia," she posted on Facebook.

Notably, investigators have not charged any members of Russia's military with the destruction of the MH17, even though it's widely assumed they know the identities of the soldiers from the 53 Anti-Aircraft Missile Brigade who operated the BUK missile.

Nor have Dutch investigators named the person they believe gave the order to shoot.

Russian investigative journalist Roman Dobrokhotov says he believes the prosecution team is presenting the strongest evidence it has first, but he expects more people will be charged.

Dobrokhotov has worked extensively with the journalism collective Bellingcat, which has unearthed key social media photos and database evidence that tracked the BUK from its Russian headquarters to the launch site in Ukraine.

He believes the trial could culminate with Russia's minister of defence, Sergei Shoigu, being added as a defendant.

"I'm pretty sure that Shoigu will be one of the people who will be called guilty by the prosecutors and of course we understand he will not come to the [court] and he will not be brought to justice before Vladimir Putin leaves power, but I think this is still very politically important. "

The victims' families are also hoping the findings of the criminal trial will also provide a foundation for a civil lawsuit against the Russian government that's being launched through the European Court of Human rights.

While the families have already received an undisclosed financial settlement from Malaysian Airlines, the human rights case could theoretically also result in settlement, though it could take more than a decade to resolve.

The Vancouver-based lawyer who is representing the family of Andrei Anghel, the lone Canadian on board, says his parents do not plan to attend the trial in Amsterdam, but are nonetheless following it closely.

"The family has been devastated by Andrei and it's extremely difficult for them to deal with this in a public setting," said Joe Fiorante, an aviation lawyer with CFM lawyers.

The victims' families have launched a civil action against the Russian government and the outcome of the criminal case is crucial, says Fiorante.

"In the European Court of Human Rights case what's at stake is a declaration that the Russian Federation, the state of Russia, is responsible for a violation of the rights of all of the passengers, including Andrei, and there is a possibility that additional compensation can be awarded."

The MH17 trial comes less than two months after another passenger jet, Ukrainian Airlines Flight 752, was shot down by a surface-to-air missile after taking off from Tehran's airport, killing all board, including 57 Canadians.

While Iran initially denied it downed the plane, within days its government admitted the mistake.

"When I saw that on TV, it made me cry. I felt relief when I saw that," Silene Fredriksz said of the admission. "Someone took responsibility."

More than anything, she says what she and the other families want is Russia's government to do the same.

"That's what we say all the time — just say sorry."