Fighting fake news on Facebook: Why some employees are willing to risk their jobs to stop misinformation

Fake news is hardly new. But it is now being viewed as a real problem by those who believe that the posting of hoax stories on Facebook influenced the U.S. presidential campaign in Donald Trump's favour. CBC's The Investigators spoke to a journalist who has reported heavily on the topic.

Fake news is hardly new. It has dominated the headlines at the checkout stands of grocery stores for decades. How else would we have learned that Elvis Presley was still alive or that Vegas headliner Wayne Newton is actually an alien?

But recently fake news is being viewed as a real problem by those who believe that the posting of fake news stories on Facebook influenced the U.S. presidential campaign in Donald Trump's favour, as many of those widely shared stories were sympathetic to Trump — or critical of Hillary Clinton.

A story claiming Pope Francis had endorsed Donald Trump, for example, was shared a staggering 100,000 times. Those fake news sites make money for their creators every time someone shares or clicks on a story, helping to explain why they seem to be increasing exponentially online.

This week, under pressure to do something, Facebook CEO Mark Zuckerberg announced his company, like Google, will now prevent fake news sites from profiting on his platform. But he says he won't stop them from posting the material.

She spoke to several employees, some of whom work at the company's headquarters in Menlo Park, Calif., who have been meeting secretly to think of ways to pressure their employer to clamp down on the fake news sites.

Frenkel spoke to CBC News for this weekend's episode of The Investigators, and explained why those employees were willing to risk their jobs by meeting privately, and by speaking to her, in an effort to fight fake news.

Here's part of that conversation:

SHEERA FRENKEL: I think that Facebook employees have not really spoken out as much as employees at other tech companies. And the fact that they did want to come forward and speak to me, as well as meet secretly, shows just how bad they think the problem has gotten. I think that the comments by Mark Zuckerberg over the weekend, that it was a "crazy idea" that fake news had influenced the elections, is what really drove them over the edge and made them feel like they had to take a public stance on this.

DIANA SWAIN: What do they think is at stake here, if not more is done?

SHEERA FRENKEL: A lot of employees I spoke to weren't so much talking about what happened in the elections that just passed in the United States, but are looking forward to elections that are going to be facing Europe and the rest of the world in the coming year. They said that fake news is affecting a number of countries on a number of different issues, and they didn't want to see the mistakes made here in the United States over the past year replicated across the world. Especially as Facebook is pushing right now to expand so heavily into the rest of the world.

DIANA SWAIN: Facebook and Google have responded to this by saying, 'All right, we'll cut off the revenue stream for these fake news sites.' Because that's why they're really there — to make money. Is that going to be enough?

SHEERA FRENKEL: The employees I spoke to said they didn't think it was enough. I mean, stopping them from advertising is definitely a step. But it doesn't address what is the key issue, which is that for as long as these [stories] are allowed to exist on the platform, and for as long as Facebook allows these sites to run wild, people are going to click on them and people are going to share them. And in parts of the world with lower digital literacy, where people maybe have less of a healthy media climate of sources they can rely on, people are going to believe those fake news items, and make judgments based on what they read there.

DIANA SWAIN: One of the guys who's really the leader of these fake news site — a number of them are under his name — has expressed surprise now that he might have contributed to anything in terms of the outcome of the election. But he says, 'Hey, look, I make money doing this. And is it really my fault that people don't fact-check? If they don't bring any critical thinking to these stories?' — some of which he even admits are pretty fantastic.

SHEERA FRENKEL: Oh definitely. BuzzFeed did a report looking at [the] Macedonian teenagers who are running some of these sites. So it's not always that they're being done maliciously, that there's a political intent. Of course, some of them are put up to support one candidate over another, but a lot of the time it's just people trying to make money. And I think that is what's interesting. ... Not just this guy, but also somebody in the Washington Post also wrote and said, 'I can't believe people bought that. I can't believe people shared that article as widely as they did.' So I think there's a certain amount of incredulity that people believe everything they see online. 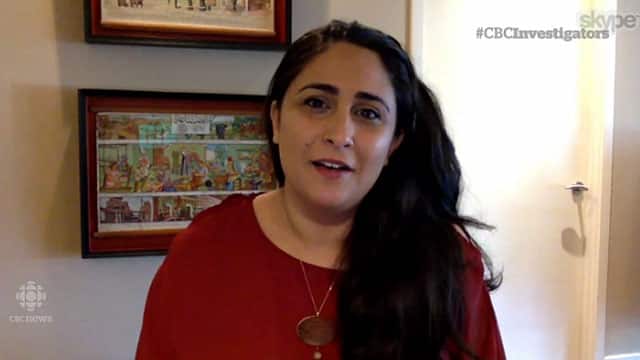 4 years agoVideo
2:47
Did the spread of fake news on Facebook play a role in electing Donald Trump? Diana speaks with BuzzFeed cybersecurity correspondent Sheera Frenkel, who revealed a group of Facebook employees are trying to pressure the company to combat misinformation 2:47

This week's episode of The Investigators also includes interviews with CBC's Dave Seglins and the Toronto Star's Rob Cribb about their joint investigation into the RCMP's quest for greater access to Canadians' digital privacy, including having to give up their own personal privacy to get RCMP clearance in order to see some secret files.