The fugitive suspected of shooting and killing a man, then posting a video of the slaying on Facebook over the weekend, killed himself today following a police chase, according to investigators.

The fugitive suspected of shooting and killing a man, then posting a video of the slaying on Facebook, killed himself today following a short police chase, according to investigators.

Pennsylvania police said Steve Stephens, 37, was spotted Tuesday morning in Erie County, the northwest corner of the state, about 160 kilometres east of Cleveland. Police got a tip from a McDonald's employee that his white Ford Fusion was parked outside the fast-food restaurant.

He ordered a 20-piece Chicken McNuggets and french fries, according to the manager.

Restaurant owner Thomas DuCharme Jr. told the Erie Times-News that his employees tried to "buy some time for the cops" by telling Stephens his order of fries was delayed. Stephens said he had no time to wait and drove off, DuCharme said.

Police picked up the trail in a chase that lasted about three kilometres before Stephens stopped his vehicle and took his own life, authorities said.

"As the officers approached that vehicle, Steve Stephens took his own life," said Cleveland police Chief Calvin Williams. "We would have preferred that it had not ended this way," he added, saying he and the community would have had "a lot of questions" for Stephens.

The nationwide manhunt for Stephens started three days ago when, according to police, he posted a video of himself killing Robert Godwin Sr., 74, a retired foundry worker who had 10 children.

Stephens, who had no prior criminal record, was not suspected in any other killings, Cleveland officials said. Stephens said in a separate video on Facebook on Sunday that he had already killed a dozen others.

Williams told reporters that investigators were in the Erie area, about 150 kilometres to the east, because it was the last place where Stephens's cellphone was detected.

Police are working to retrace his steps and determine if he had any help during his run from the law, he said. But Williams noted there are a lot places to hide — woods, barns, farms — in rural Pennsylvania.

Earlier in the day, another investigator said Stephens might have been getting help, and predicted that he might not be taken alive.

"Either he's dead somewhere or someone has holed him up somewhere, in a house," said U.S. Marshal Peter Elliott. 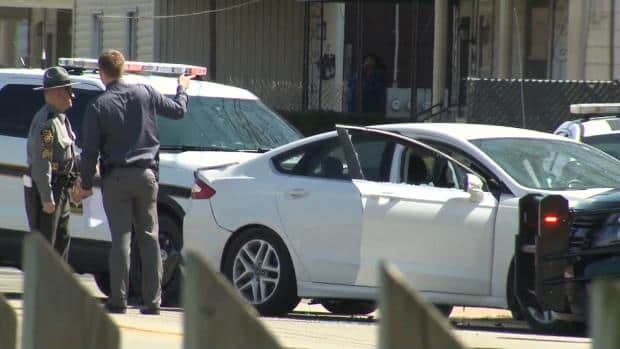 4 years agoVideo
1:27
Suspect kills self after short pursuit by police 1:27

Stephens is not believed to have known Godwin, who media reports said spent Easter Sunday morning with his son and daughter-in-law before he was killed.

Beech Brook, a behavioural health facility in a Cleveland suburb where Stephens had worked as a job counsellor for teenagers and young people since 2008, said in a statement on Tuesday that Stephens had cleared an extensive background check.

In interviews before Stephens's death, some of Godwin's relatives forgave his killer.

"I forgive him because we are all sinners," Robby Miller, Godwin's son, said in an interview with CNN.

Others were less sympathetic.

"All I can say is that I wish he had gone down in a hail of 100 bullets," Godwin's daughter, Brenda Haymon, told CNN. "I wish it had gone down like that instead of him shooting himself."

Prior to the killing, Stephens's life appeared to be unravelling under the weight of gambling debts and trouble with his girlfriend.

In other, rambling videos on Facebook, he said he was out of options and wanted to kill as many innocent people as he could, though authorities have not found any evidence of other killings.

The video purporting to show Stephens killing Godwin was taken down by Facebook after a few hours. In it, he said  "I snapped, I just snapped." But police would not speculate on his motivation.

Stephens also mentioned a woman's name and told Godwin, "She's the reason that this is about to happen to you." Godwin, who was collecting aluminum cans at the time, did not seem to recognize the name.

The woman Stephens spoke of, Joy Lane, said in a text message to CBS that "we had been in a relationship for several years. I am sorry that all of this has happened."

She also said Stephens was "a nice guy" who was good to her and her children.

Police said Stephens had a permit to carry a concealed weapon.