A massive explosion in Kabul has killed at least 90 people and wounded as many as 400. The truck bomb went off in the city's diplomatic district, damaging several buildings, including Canada's embassy. 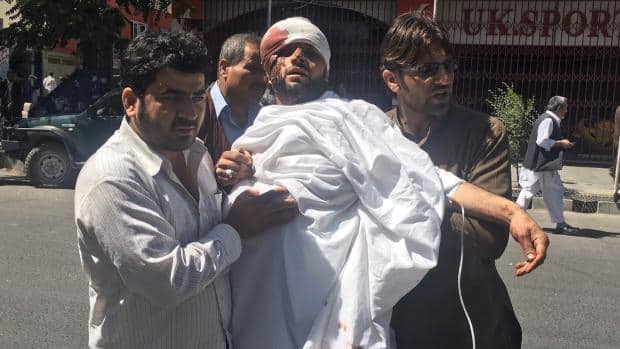 A suicide attacker struck the fortified heart of the Afghan capital with a massive truck bomb Wednesday, killing 90 people and wounding 400. The explosion also damaged several embassies, including Canada's.

The bomber drove into Kabul's diplomatic district during the morning rush hour, leaving behind a bloody scene of chaos and destruction.

No group immediately claimed responsibility for the blast. Both the Taliban and the Islamic State in Iraq and Syria (ISIS) have staged large-scale attacks in the Afghan capital in the past.

The Taliban flatly denied any involvement in an email to news outlets and condemned all attacks against civilians.

It was one of the worst attacks Kabul had seen since the drawdown of foreign forces from the country at the end of 2014.

"I have been to many attacks, taken wounded people out of many blast sites, but I can say I have never seen such a horrible attack as I saw this morning," ambulance driver Alef Ahmadzai told The Associated Press. "Everywhere was on fire and so many people were in critical condition."

The explosives were hidden in a tanker truck used to clean out septic systems, said Najib Danish, deputy spokesperson for the interior minister. The number of dead and wounded was provided by the Afghan government's media centre, citing a statement from the Afghan Ulema Council, the country's top religious body that includes Muslim clerics, scholars and men of authority in religion and law.

The neighbourhood is usually considered Kabul's safest area, with foreign embassies protected by dozens of three-metre-high blast walls. The foreign ministry and the presidential palace are both in the area.

Prime Minister Justin Trudeau said Canada condemned the attack and expressed condolences to its victims. He said Canadian officials and staff in the city are accounted for and safe.

Foreign Affairs Minister Chrystia Freeland said in a statement that the Canadian Embassy in Kabul was damaged.

"Our Canadian Embassy sustained significant damage to its first floor and there was minimal impact on the rest of the building," said Freeland.

Staff at our embassy are safe and accounted for, and Canadians will keep working alongside Afghans as they rebuild and recover.

"The timing of this cowardly attack during the holy month of Ramadan was deliberate and intended to target civilians and foreign service workers from some of our closest allies."

The International Federation of Journalists and its affiliate, the Afghan Independent Journalists Association, also condemned the brutal attack. At least two media staffers were killed and four others were wounded.

"The bomb went off just outside of the headquarters of a major cellphone company and a popular television station," she said. "There is a hotel nearby. All of the windows were blown out."

Local TV footage showed shocked residents soaked in blood stumbling about, then being ferried away to hospitals. Passersby stopped and helped the wounded. Others congregated outside the nearby Italian-run Emergency Hospital.

A statement from Afghanistan's ministry of interior affairs says it "condemns in the strongest terms the terrorist attack" that killed so many.

"These heinous acts go against the values of humanity as well values of peaceful Afghans," the statement added. "These attacks also demonstrate the extreme level of atrocity by terrorists against innocent civilians."

The Afghan Ulema Council said, "carrying out such attacks in the holy month of Ramadan is completely against humanity." 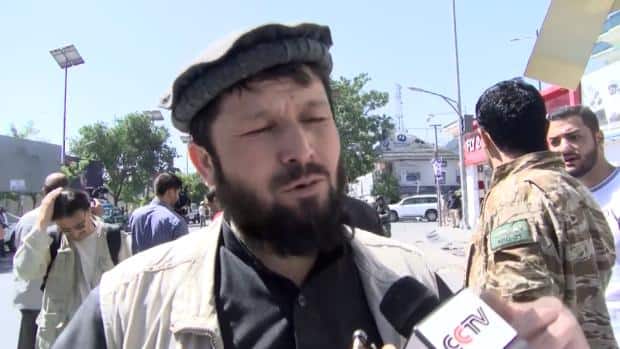 Witness: 'There were streams of blood'

Afghan President Ashraf Ghani also strongly condemned the attack. A statement from his office said that "the terrorists, even in the holy month of Ramadan, the month of goodness, blessing and prayer, are not stopping the killing of our innocent people."

Pakistan said the "terrorist attack in Kabul this morning that has caused loss of precious human lives and injuries to many." Pakistan's ministry of foreign affairs said "the blast has caused damage to the residences of some Pakistani diplomats and staff, living in the close vicinity, and inflicted minor injuries to some."

The U.S. State Department said 11 U.S. citizens working as security contractors were wounded, but none have life-threatening injuries. Nine Afghan guards at the embassy were among those killed, a department official said.  A spokesman for U.S. President Donald Trump said the United States "strongly condemns" the attack.

Japan's foreign ministry says two of its embassy employees, both Japanese nationals who were inside the embassy complex, were slightly injured in the bombing.

The explosion went off near Zanbaq Square in the Wazir Akbar Khan district, where foreign embassies are protected by a battery of their own security personnel as well as Afghan police and National Security Forces.

Turkey said its embassy was damaged but no embassy employees were harmed. The ministry said Turkey would continue to stand by Afghanistan in the fight against terrorism.

India reported "some damage to windows" at its embassy, located next to the German, Iranian and British embassies.

The German Embassy was heavily damaged. Damage was also reported at the embassies of China, France and Japan.

The U.S Embassy and the NATO mission in Kabul, located about a kilometre away from the site of the explosion, both condemned the attack. The alliance praised "the courage of Afghan Security Forces, especially the police and first responders" following the attack.

The blast was so powerful that more than 50 vehicles were either damaged or destroyed. Residents described a mushroom cloud over Kabul and windows were shattered in shops, restaurants and other buildings up to a kilometre from the blast site.

Last month, the Afghan Taliban announced the beginning of their spring offensive, promising to build their political base in the country while focusing military assaults on the international coalition and Afghan security forces.

Afghan forces, with heavy international support for several years, have been battling the Taliban insurgency for more than 15 years. The United States now has more than 8,000 troops in Afghanistan, training local forces and conducting counterterrorism operations.

In the past year, they have largely concentrated on thwarting a surge of attacks by the Taliban, who have captured key districts, such as Helmand province, which U.S. and British troops had fought bitterly to return to the government.