Migrants rushed the tunnel linking France and England repeatedly for a second night on Wednesday and one man was crushed by a truck in the chaos, deepening tensions surrounding the thousands of people camped in this northern French port city.

Man dies after being crushed by truck overnight 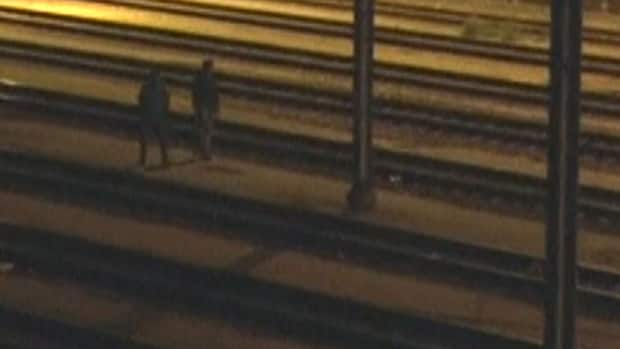 6 years ago
1:36
French and British authorities try to stem tide of desperate travellers 1:36

Migrants rushed the tunnel linking France and England repeatedly for a second night on Wednesday and one man was crushed by a truck in the chaos, deepening tensions surrounding the thousands of people camped in this northern French port city.

Eurotunnel said it had blocked more than 37,000 such attempts by migrants to reach Britain since January.

There were conflicting numbers of people involved Wednesday, ranging from 150 to as many as 1,200. But French authorities and the company agreed there had been about 2,000 attempts on each of two successive nights.

The numbers have been growing as has the sense of crisis in recent weeks, spurred by new barriers around the Eurotunnel site, labor strife that turned the rails into protest sites for striking workers, and an influx of desperate migrants.

Many British officials have expressed growing alarm at what they see as a potential influx of foreigners, although it's not clear how many people have successfully made the passage. Nine migrants have died in the attempt since June, said France's interior minister.

"This exceptional migrant situation has dramatic human consequences," said Interior Minister Bernard Cazeneuve. "Calais is a mirror of conflicts tearing up regions of the world."

About 25 migrants were seen getting off a public bus in Calais on Wednesday with a police officer who left them by the side of the road. Several said they were returning from a night of trying to cross the Channel.

"(We) come from train here and tomorrow, inshallah, try again in the train," said an Eritrean who would not give his name as he planned further attempts to reach England.

Natacha Bouchart, mayor of Calais, said about 150-250 migrants tried repeatedly overnight to reach the Eurotunnel. French officials said it was the second night of mass attempts on the tunnel. Gilles Debove, a police union official, counted about 2,000 attempts for a second night running. Debove said officers pushing back the migrants counted between 750 and 1,200 people.

Bouchart told France Info radio migrants are trying to reach England from France "at all costs" — first crossing a busy highway and then trying to stow away on trucks waiting to board trains. She says Britain, France and the Eurotunnel need to work together on the issue.

The man killed overnight, believed to be a Sudanese man in his mid-20s, was crushed by a truck as he tried to stow away, Debove told The Associated Press.

Cargo trucks were lined up overnight for several kilometres leading to the Eurotunnel freight loading zone, some of them stuck on a highway overpass above one of the many makeshift migrant camps. In a tweet, Eurotunnel said passenger trains were delayed an hour because of the overnight activity.

The company called for help from both the French and British governments.

"It's become a phenomenon which is beyond our means," said spokesman John Keefe. "We're just a small transport company operating in a little corner of Europe."

British Prime Minister David Cameron, speaking during his visit to Singapore, described the crisis as "very concerning," but that there was no point in "pointing fingers of blame." Other British officials blamed the government in France, where officials said Eurotunnel also needed to do more.

The British government has agreed to an extra 7 million pounds of funding for measures to improve security at Calais.

The Conservative Party lawmaker for Folkestone, Damian Collins, said French authorities needed to better secure their side of the tunnel. Cazeneuve said 120 government security forces were being dispatched immediately to Calais.

"They have allowed people willingly to break into the Channel Tunnel site. I can't believe they would be that lax in protecting an airport or another sensitive facility," Collins said. "But that has happened constantly throughout the summer."

The tunnel is studded with high-tech equipment to detect migrants, who increasingly have headed to the trains as the Calais port also increases security. Philippe Wannesson, who runs an association in support of the migrants, questioned whether the attempts were organized, saying the varying nationalities make that unlikely.

Migrants have continued to press northward, fleeing war, dictatorship and poverty in Africa and the Middle East.

Two ships unloaded in Italy on Wednesday, one carrying 435 passengers and 14 bodies and another with 692 migrants.​