The captain of a German humanitarian ship that spent nearly a week searching for safe harbour before being allowed to bring 234 migrants rescued at sea to Malta, declared during the odyssey: "Saving people is not a crime." Still, once he was on land he was placed under investigation for allegedly breaching maritime regulations.

The captain of a German humanitarian ship that spent nearly a week searching for safe harbour before being allowed to bring 234 migrants rescued at sea to Malta on Wednesday declared during the odyssey: "Saving people is not a crime."

Still, once he was on land he was placed under investigation for allegedly breaching maritime regulations.

It is part of a growing trend in Europe and the United States: Private groups responding to images of human suffering and deaths targeted by authorities who are often under political and popular pressure to stem the migration tides.

In announcing that Captain Claus-Peter Reisch would face investigation, Malta's Prime Minister Joseph Muscat placed the blame for the impasse — that kept the migrants at sea while European nations haggled over their fate — squarely on the captain, who he said went "against international rules and ignored directions."

French President Emmanuel Macron also criticized the captain, saying he "acted against all the rules," by not turning the migrants over to Libyan authorities after they were found floating in rubber dinghies in Libyan waters.

Humanitarian groups have pushed back. Doctors without Borders, Amnesty International and two other NGOs asked to meet with Macron over his assertion. "Engineered panic and fear-mongering by European politicians over migrations is steering the EU toward very dangerous waters," Human Rights Watch said in a statement.

Italy's new, hardline interior minister, Matteo Salvini, has been instrumental in raising the level of confrontation, closing Italian ports to humanitarian groups that he accuses of acting like taxi services for migrant smugglers operating out of lawless Libya. His refusal to grant safe harbour, coupled by that of Malta, forced the French aid ship Aquarius to sail an additional 1,500 kilometres to Spain, which agreed to take in the migrants at its port in Valencia.

While Muscat emphasized that the latest case involving the ship, the Lifeline, was unique because of the alleged violations of its captain, the refusal until Wednesday to let the ship dock — and the haggling among EU states over how to distribute the migrants — showed a hardening of positions as EU leaders head into a summit Thursday where migration policies are expected to be the focus. 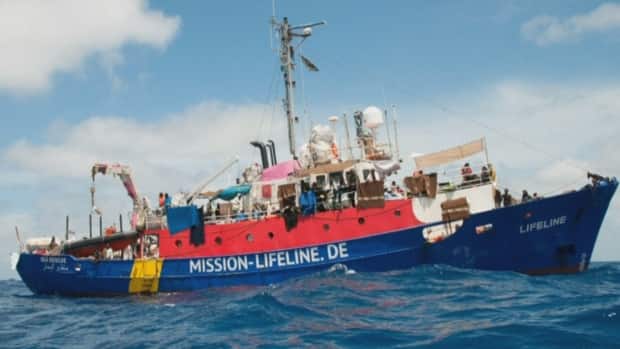 Migrant ship off Maltese coast given permission to dock in Malta

Reisch is accused of disobeying orders to turn over the migrants, who were rescued in Libyan waters, to the Libyan Coast Guard. Muscat also said the Lifeline turned off its transponder to hide the ship's location.

The group that operates the ship said it obeyed all maritime instructions as long as they were "in compliance with international law."

"It is important to underline that the only order the ship denied was to hand over people to the so-called Libyan Coast Guard, as this would have been not in line with the Geneva Refugee Convention and therefore criminal," said Alex Steier, the co-founder of the German aid group Mission Lifeline.

On the Lifeline's approach to Malta on Wednesday, migrants crowded the deck wearing orange life vests, many waving, as it entered the main port in Valletta under escort by a Maltese patrol boat. Reisch sounded the boat's horn with two long blasts to salute the migrants after their shared journey, and raised a yellow flag to signal permission to authorities to board, and a Maltese flag as a courtesy for allowing the ship to dock.

One by one, the migrants were escorted off by officials and medical personnel in white coveralls and gloves. A girl in pink shorts — one of five children on the ship — was cradled by an official. One man walked unsteadily, leaning on a helper, while another wearing shorts and a white polo shirt was barefoot and wrapped in a red blanket.

Reisch was the last to get off the ship, and he hugged the crew before getting into a waiting police car for questioning.

Once settled, the migrants will be vetted to determine if they are eligible for political asylum or if they are economic migrants that will be sent back to their countries of origin, Muscat said.

Malta opened its port only after seven other countries also agreed to take in those deemed eligible for refugee status. Besides Malta, France, Italy, Luxembourg, Portugal, Ireland, the Netherlands and Belgium agreed to take in refugees. It was unclear how many each would take.

Muscat said Malta had no legal obligation to act since the rescue happened in Libyan waters, but it was willing to offer its port "before the situation escalates to a humanitarian crisis."

The standoff comes ahead of a two-day EU summit that begins Thursday, where Italy will propose a new system for distributing migrants more evenly among EU countries, along with ways to discourage economic migrants from leaving Africa. Italy and Greece have borne the brunt of the arrivals in recent years as people make the dangerous sea journey to seek a better life in Europe, often fleeing war and oppression.

Salvini, who visited Libya earlier this week, warned Wednesday that there are 662,000 migrants from 40 countries in the northern African nation waiting to make their way to safer countries, mostly in Europe. He cited data from the International Organization for Migration.

The UN refugee agency said that this year alone, 1,000 people are missing and presumed dead crossing the Mediterranean Sea, usually in inadequate rubber dinghies organized by smugglers. Despite the travails of Lifeline and Aquarius, humanitarian groups operating ships off Libya, determined to help diminish the number of dead, are not deterred.

As the Lifeline entered Valletta's harbour it passed the crew of another humanitarian ship, the Astral, which was in Malta preparing to observe rescues by the aid group Proactiva Open Arms in order to avoid just such controversies.