Ethiopian Airlines says investigators have recovered the flight data recorder and cockpit voice recorder from the Boeing 737 Max 8 jet that crashed shortly after takeoff from Addis Ababa on Sunday, killing all 157 on board, including 18 Canadians.

All 157 people on board the aircraft died, including 18 Canadians

Ethiopian Airlines says investigators have recovered the flight data recorder and cockpit voice recorder from the Boeing 737 Max 8 jet that crashed shortly after takeoff from Addis Ababa for Nairobi Sunday and were trying to determine the cause of the deadly crash involving a new aircraft model touted for its environmentally friendly engine.

An airline official said one of the recorders was partially damaged, and "we will see what we can retrieve from it." The official spoke on condition of anonymity for lack of authorization to speak to the media.

Ethiopian authorities are leading the investigation into the crash, assisted by the U.S., Kenya and others.

It was not clear what caused the plane to go down in clear weather, but the pilot sent out a distress call and was given clearance to return to Addis Ababa, the airline's CEO said on Sunday.

International Air Transport Association (IATA) director general Alexandre de Juniac said the results of an investigation into the crash were needed before any conclusions were drawn on the incident. The IATA represents around 260 airlines globally.

"The most serious and vigorous attitude is to check and verify and establish facts," he told reporters on the sidelines of a conference in Singapore. "On this issue our permanent position is to wait for the results of the investigation to draw any conclusion."

A witness to the crash says smoke was coming from the rear of the plane before it hit the ground, killing 157 people on board.

Tamrat Abera tells The Associated Press the plane rotated twice before crashing and exploding. Smoke rose high into the sky.

On Monday, Red Cross workers slowly picked through the widely scattered debris near the blackened crash crater, looking for the remains of 157 people.

Bulldozers dug into the crater to pull out buried pieces of the jet. Personal belongings and aircraft parts were strewn across the freshly churned earth. A shredded book and business cards in multiple languages could be seen, along with clothing, a computer keyboard and other items.

Ethiopian Airlines, as well as all Chinese airlines, have grounded their Boeing 737 Max 8 planes indefinitely in the wake of the crash. Ethiopian Airlines has five of the planes in its fleet and was awaiting delivery of 25 more.

South Korean transportation authorities are conducting a safety inspection of a local airline that uses the aircraft, while Fiji Airways said it will continue flying its two Boeing 737 Max 8 planes to Pacific destinations.

Canada's two largest airlines say they are confident in the safety of the aircraft.

Calgary-based WestJet said it is "working with Boeing to ensure the continued safe operation of our Max fleet," which includes 13 Max 8s.

Boeing says it is not issuing new guidance to airlines about the 737 Max 8.

A statement Monday referred questions about the grounding of planes to airlines and aviation authorities. It said "at this point, based on the information available, we do not have any basis to issue new guidance to operators."

Shares of Chicago-based Boeing slid almost 10 per cent in early trading on Monday. They ended the day down five per cent, halting a surge that has seen the value of the company's stock triple in just over three years to a record high of $446 US last week.

Boeing said it did not intend to issue any new guidance to customers. But it planned to send a technical team to the crash site to help investigators, and issued a statement saying it was "deeply saddened to learn of the passing of the passengers and crew."

Ethiopian Airlines spokesperson Asrat Begashaw said forensic experts from Israel had arrived in Ethiopia to help with the investigation. Ethiopian authorities lead the investigation into the crash, assisted by the U.S., Kenya and others.

People from 35 countries died in the crash six minutes after the plane took off from Ethiopia's capital en route to Nairobi. Ethiopian Airlines said the senior pilot issued a distress call and was told to return but all contact was lost shortly afterward. The plane plowed into the ground at Hejere near Bishoftu. 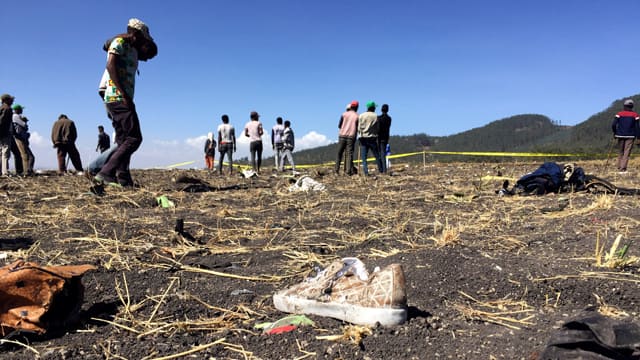 Ethiopian Airlines flight crashes, killing all 157 on board

2 years ago
0:58
People gather at the scene of the crash near Bishoftu, Ethiopia, where a search and rescue operation is underway. 0:58

Kenya lost 32 people, more than any country. Relatives of 25 of the victims had been contacted, Macharia said, and taking care of their welfare was of utmost importance.

"Some of them, as you know, they are very distressed," he said. "They are in shock like we are. They are grieving."

Among the 18 Canadians killed were a Carleton University professor and a mother-daughter pair from Edmonton.

Prime Minister Justin Trudeau sent condolences via Twitter to the families of those lost in the crash, as did Foreign Affairs Minister Chrystia Freeland.

Devastating news from Ethiopia this morning. Our thoughts are with all the victims on flight ET302, including the Canadians who were on board, and everyone who lost friends, family, or loved ones. Canadians in need of assistance, contact sos@international.gc.ca or 613-996-8885.

The government also provided a phone number for Canadians in Ethiopia to call for consular assistance.

The United Nations lost at least 21 staff members from various agencies, Secretary General Antonio Guterres said when he addressed a meeting of the Commission on the Status of Women in New York City on Monday morning.

Before leading the meeting in a moment of silence, Guterres called the crash "a global tragedy" and said the United Nations "is united in grief."

"Let us honour the memories of our colleagues by keeping their spirit of service alive," he said.

The organization had earlier said the breakdown of the dead are:

Addis Ababa and Nairobi are major hubs for humanitarian workers, and many people were on their way to a large UN environmental conference in Nairobi.

Ethiopia's parliament declared Monday a day of mourning, while the summit in Nairobi opened with a moment of silence as some wept for the UN members killed in one of the deadliest aviation accidents in the organization's history. The UN flag at the event flew at half-mast.

The crash is likely to renew questions about the 737 Max 8, the newest version of Boeing's popular single-aisle airliner, which was first introduced in 1967 and has become the world's most common passenger jet.

The accident was strikingly similar to that of a Lion Air jet of the same Boeing model in Indonesian seas in October, killing 189 people.

Indonesian investigators have not determined a cause for that crash, but days after the accident, Boeing sent a notice to airlines that faulty information from a sensor could cause the plane to automatically point the nose down. The notice reminded pilots of the procedure for handling such a situation.

Monday evening, Boeing released a statement saying that, since the October Lion Air crash, it has been working with the Federal Aviation Administration on the development, planning and certification of a software enhancement, and that it will be deployed across the 737 Max fleet in the coming weeks.

The Lion Air cockpit data recorder showed the jet's airspeed indicator had malfunctioned on its last four flights, though the airline initially said problems with the aircraft had been fixed before it left the Indonesian capital of Jakarta.

Safety experts cautioned against drawing too many comparisons between the two crashes until more is known about Sunday's disaster.

The Ethiopian plane was new, delivered to the airline in November. The jet's last maintenance was on Feb. 4, and it had flown just 1,200 hours.

The crash shattered more than two years of relative calm in African skies, where travel had long been chaotic. It also was a serious blow to state-owned Ethiopian Airlines, which has expanded to become the continent's largest and best-managed carrier and turned Addis Ababa into the gateway to Africa.