The captain of a doomed Ethiopian Airlines flight did not practise on a new simulator for the Boeing 737 Max 8 before he died in a crash with 156 others, a pilot colleague said.

The captain of a doomed Ethiopian Airlines flight did not practise on a new simulator for the Boeing 737 Max 8 before he died in a crash with 156 others, a pilot colleague said.

Yared Getachew, 29, was due for refresher training at the end of March, his colleague told Reuters, two months after Ethiopian Airlines had received one of the first such simulators being distributed. He declined to give his name as staff have been told not to speak in public.

The March 10 disaster, following another Max 8 crash in Indonesia in October, has set off one of the biggest inquiries in aviation history, focused on the safety of a new automated system and whether crews understood it properly.

In both cases, the pilots lost control soon after takeoff and fought a losing battle to stop their jets plunging down.

The Max, which came into service two years ago, has a new automated system called MCAS (Manoeuvring Characteristics Augmentation System) that's meant to prevent an aerodynamic stall, which can cause a loss of lift sending the plane downwards in an uncontrolled way.

"Boeing did not send manuals on MCAS," the Ethiopian Airlines pilot told Reuters in a hotel lobby.

"Actually, we know more about the MCAS system from the media than from Boeing."

Under unprecedented scrutiny and with its Max fleet grounded worldwide, the world's largest planemaker has said airlines were given guidance on how to respond to the activation of MCAS software. It is also promising a swift update.

According to a person familiar with the changes, Boeing will make standard a safety feature on every Max 8 as part of changes that it is rushing to complete on the jets by early next week. The person spoke on condition of anonymity because Boeing and U.S. federal regulators are still discussing details of the upgrade to the Max fleet.

Ethiopian Airlines said Thursday its pilots had completed training recommended by Boeing and approved by the U.S. Federal Aviation Administration (FAA) on differences between the previous 737 NG aircraft and the 737 Max version.

They were also briefed on an emergency directive after the Indonesia crash, which was incorporated into manuals and procedures, it said in a tweet. The 737 Max simulator was not designed to replicate the MCAS system problems, it added.

"We urge all concerned to refrain from making such uninformed, incorrect, irresponsible and misleading statements during the period of the accident investigation."

Globally, most commercial airline pilots refresh training in simulators every six months. In the Ethiopian crash, it was not clear if Yared's colleague on board — First Officer Ahmednur Mohammed, 25, who also died in the crash — had used the new simulator.

It was also not clear if Yared or Ahmednur would have been trained on that simulator or an older one for 737s that their airline also owned.

"I think that the differences between the 737 NG and the Max were underplayed by Boeing," said John Cox, an aviation safety consultant, former U.S. Airways pilot and former air safety chairman of the U.S. Airline Pilots Association.

"Consequently, the simulator manufacturers were not pushing it either. The operators didn't realize the magnitude of the differences," he told Reuters in a communication over the Ethiopian pilot's remarks.

The 737 Max 8 was introduced into commercial service in 2017, but pilots of older 737s were only required to have computer-based training to switch, according to Boeing, airlines, unions and regulators.

By December, two months after the Lion Air crash that killed 189 people off Jakarta, the main simulator producer CAE Inc. of Canada said it had delivered just four Max simulators to airlines.

At that time, CAE had orders from airlines globally for 30 Max simulators, which cost between $6 million and $15 million each depending on customization.

The world's largest 737 operator, Southwest Airlines, will not have its first Max simulator ready for use until October, its pilot union said Wednesday.

"It is still very disturbing to us that Boeing did not disclose MCAS to the operators and pilots," the association told members in a memo seen by Reuters.

The Weekly looks at issues pilots have reported about Boeing's plane automation system: 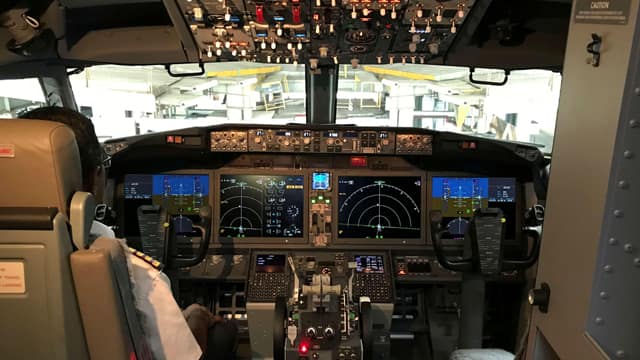 2 years ago
4:49
Pilots have reported issues with Boeing's plane automation system, with one pilot complaining the flight manual is "almost criminally insufficient." Automation is introduced to save money and minimize human effort, but the crashes of two Boeing 737 Max 8 planes is re-framing the discussion. The Weekly finds hundreds of incident reports showing the trouble pilots are having with automation on their planes. 4:49