Preliminary data retrieved from the flight data recorder of the Ethiopian Airlines plane that crashed shows "a clear similarity" with an earlier disaster in Indonesia, Ethiopia's transport minister said Sunday.

Preliminary data retrieved from the flight data recorder of the Ethiopian Airlines plane that crashed shows "a clear similarity" with an earlier disaster in Indonesia, Ethiopia's transport minister said Sunday.

The disclosure came as thousands marched in the capital of Addis Ababa, accompanying 17 empty caskets, at a funeral for the Ethiopian victims of Flight 302. The caskets were empty because authorities have said that recovering and identifying the remains will take months.

The crash of Ethiopian Flight 302 on March 10 and that of a Lion Air plane in Indonesia in October — both of them Boeing 737 Max 8 jetliners — have prompted Canada, the U.K. and other countries to ground the aircraft.

The flight recorders from Flight 302, which went down shortly after takeoff from Addis Ababa for Nairobi, were recovered "in a good condition that enabled us to extract almost all the data inside," Transport Minister Dagmawit Moges told reporters.

Moges did not elaborate on what the similarities were.

The U.S. Federal Aviation Administration already has said satellite-based tracking data showed that the movements of Ethiopian Airlines Flight 302 were similar to those of Lion Air Flight 610, which crashed off Indonesia in October, killing 189 people.

Both planes flew with erratic altitude changes that could indicate the pilots struggled to control the aircraft. Shortly after their takeoffs, both crews tried to return to the airports but crashed.

Suspicions emerged that faulty sensors and software may have contributed to the crashes.

Moges said the Ethiopian government intends to release detailed findings within a month.

At the memorial service earlier in the day, some of the relatives who marched behind the flag-draped coffins were overcome with grief and fainted.

The service came one day after officials began delivering bags of earth to family members of the 157 victims of the crash instead of the remains of their loved ones because the identification process is expected to take such a long time. 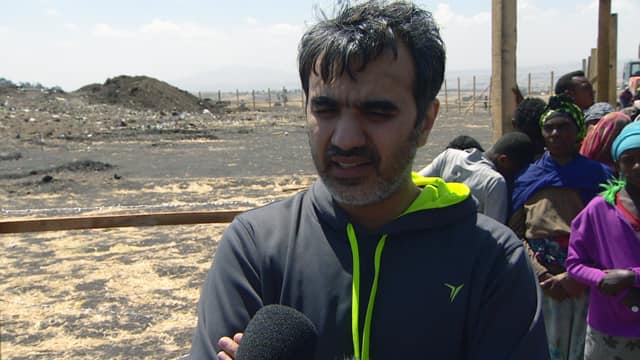 2 years ago
1:54
The CBC's Susan Ormiston reports from Addis Ababa on the funerals of the Ethiopian Airways crash victims, plus an emotional visit to the crash site by a Brampton, Ont., man who lost six family members. 1:54

Family members confirmed they were given a kilogram sack of scorched earth taken from the crash site. Many relatives already have gathered at the rural, dusty crash site outside Ethiopia's capital.

Elias Bilew said he had worked with one of the victims, Sintayehu Shafi, for the past eight years.

"He was such a good person," Bilew said. "He doesn't deserve this. He was the pillar for his whole family."