Whether they like Trump or not, and some plainly don't, scores of the Republicans chosen to cast votes in the state-capital meetings told AP they feel bound by history, duty, party loyalty or the law to rubber-stamp their state's results and make him president.

Clinton won some 2.6 million more votes, but Trump is in line to win 306 of 538 electoral votes

The U.S. Electoral College is expected to formally elect Donald Trump as president on Monday, but chatter about bucking tradition and voting for someone else appears to be more talk than reality.

The Associated Press tried to reach all 538 electors and interviewed more than 330 of them. The canvas found Republican electors are being swamped with pleas to cast ballots for someone else.

Whether they like Trump or not, and some plainly don't, scores of the Republicans chosen to cast votes in the state-capital meetings told AP they feel bound by history, duty, party loyalty or the law to rubber-stamp their state's results and make him president. Appeals numbering in the tens of thousands — drowning inboxes, ringing cellphones, stuffing home and office mailboxes with actual handwritten letters — have not swayed them.

The interviews found widespread Democratic aggravation with the electoral process but little expectation that the rush of anti-Trump manoeuvring can stop him. For that to happen, Republican-appointed electors would have to stage an unprecedented defection.

Still, people going to the typically ho-hum electoral gatherings have been drawn into the rough and tumble of campaign-season politics. Republicans are being beseeched to revolt in a torrent of lobbying, centred on the arguments that Clinton won the popular vote and that Trump is unsuited to the presidency. Most of it is falling on deaf ears, but it has also led to some acquaintances being made across the great political divide.

Many of the electors voting for Trump say they are doing so to speak for rural America.

Rural areas have 'no voice' with other system

"Our Founding Fathers established the electoral college because those larger states, those larger areas, don't necessarily need to be the ones that rule," said Mary Sue McClurkin, a Republican elector from Alabama.

It's an expected argument given the unusual circumstances of the 2016 election. Clinton won some 2.6 million more votes than Trump in the nationwide tally. But Trump is in line to get 306 of the 538 electoral votes under the state-by-state distribution of electors used to choose presidents since 1789.

Trump won rural areas, small towns and many small cities, including in states Clinton carried. Clinton won in the largest urban areas, including in Trump states.

Former Alaska governor Sean Parnell, a Republican elector, said Democrats' strength on the coasts is enough to justify the electoral college. "A presidential election decided each time by either California or New York," he said, would leave voters in Alaska and many other places 'with no voice' in presidential politics.

Trump and Clinton split the six most populous states, each winning three, but Trump won seven of the top 10. Of the 10 smallest states plus the District of Columbia, Trump edged Clinton 6-5. Trump actually ran up his national advantage in midsize states.

But the dynamics highlight the delicate balance in a political structure that defines itself simultaneously as a democracy and a republic.

'Unique to our American system'

When the Constitution was written, some signers wanted direct election of the president. Others wanted state legislatures or Congress to choose the executive. The electoral college was the end result: Each state got a slate of electors numbering the same as its delegation in Congress. Electors vote, with rare exception, for whichever candidate won the most votes in their state — effectively meaning the presidential election is 51 separate popular votes.

"It's such an interesting compromise that gave us the electoral college, unique to our American system," said elections law expert Will Sellers from Alabama, who will serve as a Republican elector for the fourth time.

The system gives smaller states an advantage: The number of electors is based on each state's number of U.S. representatives plus two, for each member of the U.S. Senate — itself a compromise favouring small states.

So California's 55 electoral votes reflect 53 House members and two senators. For seven states, including Wyoming, Delaware and the Dakotas, those extra two electoral votes bring their total to the minimum of three.

The electoral canvass by the Associated Press found overwhelming support for the system, and the nominee, among Republican electors. The AP found only one pledged to Trump who will refuse to vote for him.

Most, like Oklahoma elector Lauree Elizabeth Marshall, will stick with tradition.

If anything, when Republican electors talk about large states, they actually mean New York and California. Clinton's lead in California, the most populous state, is more than her national lead. She won New York by about 1.7 million votes.

McClurkin, the Alabama elector, says many of the letters and emails she's received have come from those two states. "I've not gotten any from a Southern state," she said.

But Democratic elector Eric Herde from Washington state argued that the country should scrap electoral votes in favour of the national ballot count. All electoral college defences, whether citing population or the genius of the founders, amount to "states mattering more than people," Herde said. "The argument that the person who got the most votes should win is still the better argument."

The results of the electoral college will be certified in Congress on Jan. 6. 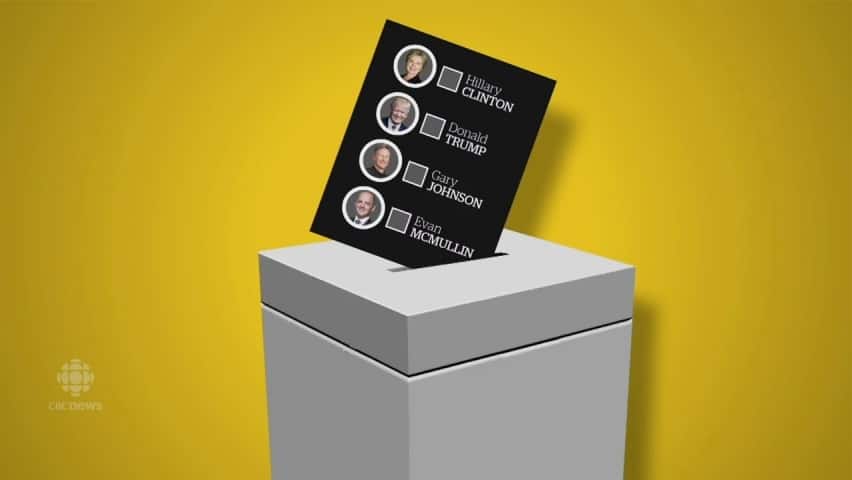 The Electoral College: How does the U.S. elect the President?

4 years agoVideo
1:29
The CBC's Rosemary Barton explains the electoral college system and why everyone is talking about 'the race to 270.' 1:29
CBC's Journalistic Standards and Practices|About CBC News