2 Canadians among those on EgyptAir flight that crashed in Mediterranean

Two Canadians were among the 66 passengers and crew on an EgyptAir jet that disappeared from radar early Thursday en route from Paris to Cairo in what Egypt said could have been a terrorist attack.

Flight 804 had 56 passengers, 7 crew members and 3 security officials on board 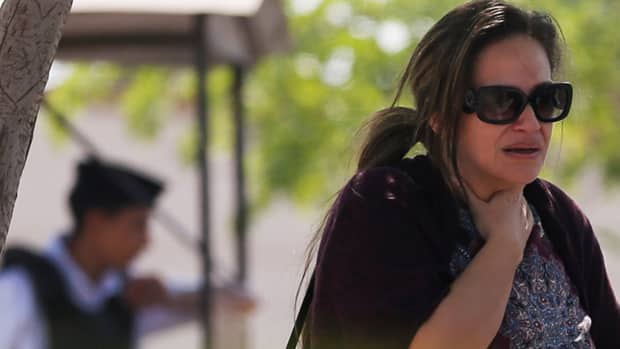 4 years ago
3:03
List of 56 passengers includes a Canadian, based on EgyptAir information 3:03

Two Canadians were among the 66 passengers and crew on an EgyptAir jet that swerved wildly in the sky before disappearing from radar early Thursday en route from Paris to Cairo in what Egypt said could have been a terrorist attack.

EgyptAir said a Canadian named Marwa Hamdy was on the flight. Hamdy was born in Saskatoon but left the city with her parents at the age of 7.

Hamdy's friend, Haleh Banani, said the IBM project manager and mother of three had been returning from visiting family in Paris.

"Based on the information currently available, we confirm that two Canadian citizens are among the passengers on this flight," Foreign Affairs Minister Stéphane Dion said in a statement Thursday afternoon. "We are providing consular assistance to the families, and Canadian officials are working closely with the authorities to confirm whether there were any additional Canadian citizens on board."

EgyptAir said there was no one else on the manifest identified as Canadian, which could be the case if the second person was a dual citizen and used another passport for the flight.

Dion said the ministry was working with French and Egyptian counterparts to assess the situation and consider any requests for support, and he urged Canadians concerned about friends or relatives who may have been on board to contact Global Affairs Canada. 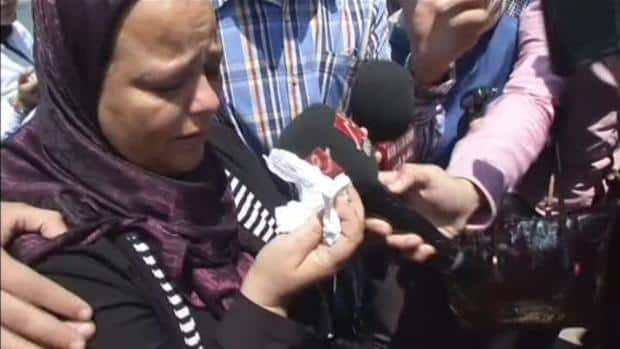 EgyptAir Flight 804, an Airbus A320 with 56 passengers, seven crew members and three security officials on board, went down about halfway between the Greek island of Crete and Egypt's coastline, or around 280 kilometres offshore, after takeoff from Charles de Gaulle Airport, authorities said.

Egyptian and Greek authorities in ships and planes searched the suspected crash area throughout the day for traces of the airliner or its victims, with more help on the way from the U.S., Britain and France.

But as night fell, they had yet to find any confirmed debris, stepping back from an earlier reported sighting of life vests and other floating material.

Egyptian Prime Minister Sherif Ismail said it was too early to rule out any explanation for the crash, including an attack like the one blamed for bringing down a Russian airliner over Egypt's Sinai Peninsula last year.

The country's aviation minister, Sherif Fathy, said a terrorist attack was more likely than a technical failure in this case.

Russia said it was "in all likelihood" a terror attack, while French and U.S. officials said nothing could be ruled out. Officials from multiple U.S. agencies told Reuters that a U.S. review of satellite imagery so far had not produced any signs of an explosion aboard the EgyptAir flight.

There was no immediate claim from militants.

The plane took off at 11:09 p.m. local time in Paris from Charles de Gaulle Airport.

Kammenos said the aircraft was 16 to 25 kilometres inside Egyptian airspace at the time.

There were no reports of stormy weather at the time.

Greek authorities say traffic controllers' last communication with the EgyptAir pilot found him in good spirits. Those controllers lost contact as the flight headed into the Egyptian area of responsibility.

At 3:27 a.m., air traffic controllers tried to contact the pilot again for the handover to Cairo's area of responsibility, but "despite repeated calls, the aircraft did not respond."

Air traffic control then called on the emergency frequency and again there was no response. Several minutes later, the aircraft was over the exit point to Greek airspace, and then vanished from radar. The Greek authority said the military was asked for help in case the plane could be located on military radar, but there was no sign of it.

France had a surveillance aircraft in the area at the time that was looking for refugees crossing the waters, according to the CBC's Derek Stoffel. He said France diverted that plane to take part in the search and rescue effort.

The aircraft's passengers included 30 Egyptian and 15 French nationals, along with citizens of 10 other countries: Canada, Algeria, Belgium, Britain, Chad, Iraq, Kuwait, Portugal, Saudi Arabia and Sudan. EgyptAir said two of the passengers were infants and another was a child.

Among the passengers, according to employers and officials, were the Egypt-raised manager of a Procter & Gamble plant in Amiens, France; a Saudi woman who works at the Saudi Embassy in Cairo; the sister-in-law of an Egyptian diplomatic official in Paris; and a student at France's prestigious Saint-Cyr military academy who was heading to home to Chad to mourn his mother.

At Cairo airport, a man sat on a brown leather couch crying with his hands covering his face. "How long will Egypt live if human lives are so cheap?" he said.

The mother of a flight attendant rushed out of the VIP hall where families waited in tears. She said the last time her daughter called her was Wednesday night.

"They haven't told us anything," she said. Some relatives tried to beat up a photographer working for EgyptAir who took several pictures of the families waiting in the hall. Security officials intervened and escorted him out.

Airbus said the missing A320 was delivered to EgyptAir in November 2003 and had operated about 48,000 flight hours. The missing flight's pilot had clocked up 6,275 hours of flying experience, including 2,101 hours on the A320, while the first officer had 2,766 hours, EgyptAir said.

A320s normally seat 150, which means the EgyptAir plane was barely a third full.

Whatever caused the crash, the disaster is likely to deepen Egypt's woes as the country struggles to revive its ailing economy, particularly its lucrative tourism industry. It has been battered by the bloodshed and political turmoil in which the country has been mired since the 2011 overthrow of President Hosni Mubarak.

Thursday's disaster also raises questions about security at De Gaulle Airport, at a time when Western Europe has been on high alert over the deadly Islamic extremist attacks in Paris and at the Brussels airport and subway over the past six months.

French Foreign Minister Jean-Marc Ayrault said that airport security had been tightened considerably before the disaster, in part because of the coming European soccer championship, which France is hosting.