The UN mission dealing with the Ebola response has set bold goals to try and contain the outbreak, but in Liberia's capital, medical providers like Doctors Without Borders are working flat out just to keep up.

'It’s tough because you have more deaths than usual,' nurse Tashan Bremond says 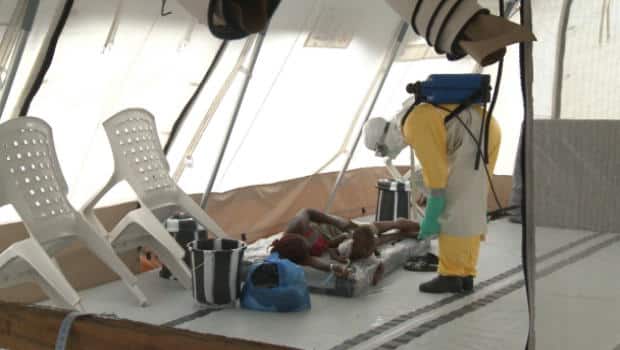 6 years ago
4:22
CBC's Adrienne Arsenault is on the ground in Liberia, taking a closer look at the health care there 4:22

If only it was as simple to deliver on pronouncements as it is to make them.

On Tuesday in Monrovia, the city perhaps most stretched and struggling with the Ebola crisis, word of an ambitious directive was sinking in.

The United Nation Mission on Ebola Emergency Response declared it wants 70 per cent of all infected Ebola patients in treatment centres within 60 days.

That’s just two months to turn around a staggering part of the Ebola equation: Right now, fewer than 20 per cent of the seriously ill find help in clinics, meaning many remain at home or on the streets, potentially further infecting an already vulnerable population.

In Monrovia, the international humanitarian organization Doctors Without Borders — known by its French initials, MSF — is expanding as quickly as resources will allow.

Ten days ago, MSF had a capacity of 120 beds at its facility in the Liberian capital. Today, it’s at 200 and they’re scrambling to build space to double that number by the end of October.

Staff increases are keeping pace, for the moment, too — from 400 health care workers a week and a half ago, to 617 right now.

Among the dozens of international staff is Tashan Bremond, a nurse from Montreal.

She’s worked overseas missions before, long stretches in places like Congo and South Sudan. She knows that culturally, many Africans show caring with the touch of a hand.

But Ebola, which is a disease passed on by direct contact, limits what comes naturally to so many people in this region. "So it’s a huge problem," Bremond said. "And once it hits the city, it’s a nightmare."

Bremond has been in Monrovia just five days, still getting adjusted to the realities of a crisis that she, indeed the world, have never witnessed before.

"It’s more scary from outside than inside actually," Bremond says of spending her days at the MSF facility with its high standard of health-safety protocols. "But it’s tough because you have more deaths than usual. Families are apart. Parents are dying and children are left alone then rejected by the community. That’s a bit hard to deal with."

But it’s not all grim. The 34-year-old nurse is seeing some survival stories, too.

Bremond looks over to a young Monrovian woman who arrived at the MSF clinic weeks before she did. Jenneh Kromah was sick and dying from Ebola, along with her older brother and sister. They passed away last Saturday. But Kromah beat it and on Tuesday, when CBC was there, she was declared free to go home.

The moment is bittersweet in so many ways.

Kromah may yet face the stigma some survivors experience after fighting a deadly disease. And so staff at MSF say good-bye with a very public and reassuring touch of hands, a signal that it’s alright to reach out, feel human contact again.

As ambulances deliver seven new suspected cases, Bremond tries to stay positive. "We’re telling them they can be survivors."