The 6.7 magnitude quake rattled Turkey's Aegean coast as well, including the resort town of Bodrum, but Kos was nearest to the epicentre and appeared to be the worst hit, with all of the deaths and injuries reported there. Buildings with damage included the old mosque and a 14th-century fortress at the entrance to the main port.

"People — as they do on typical summer nights in seaside resorts — were sitting in seaside cafés, some at bars, when the ground started to shake," said CBC's Nil Koksal, reporting from Istanbul.

It felt like being at a theme park.— Resident Christopher Hackland

The area is popular with tourists, and many Turks make day trips to the Greek island, which is just five kilometres from the Turkish mainland.

Giorgos Hadjimarkos, regional governor, said four or five of the injuries were "worrying" and damaged buildings were being inspected, but the "main priority at the moment is saving lives." The Kos hospital said at least 20 of the injured had broken bones.

Fire Service Rescue Chief Stephanos Kolokouris told state television that the two men had been identified as tourists from Turkey and Sweden but gave no further details. The two tourists died after a wall collapsed onto a bar in the Old Town of the island's main port, he said.

Thirteen people, at least two who were in critical condition, were airlifted to hospitals in Athens and on the islands of Rhodes and Crete.

Fallen bricks and other damage could be seen in Kos's Old Town, full of bars and other nighttime entertainment.

"The rest of the island has no problem. It's only the main town that has a problem," Kos Mayor Giorgos Kyritsis told state-run Greek media.

"The buildings affected were mostly old, and were built before the earthquake building codes were introduced."

Rescuers were checking for trapped people inside houses after the quake struck in the middle of the night. Kyritsis said the army was mobilized along with emergency services. The island's port was among structures that sustained damaged and a ferry en route there was not docking, the coast guard said.

Authorities had warned of a localized tsunami — later measured by officials at just 13 centimetres — and witnesses described a "swelling" of the sea after the earthquake, which caused vehicle and property damage. Video from the scene showed people hurrying through streets flooded with ankle-deep water.

Parts of the island's main town were also flooded, and the rising seawater even pushed a boat onto the main road and caused several cars to slam into each other. 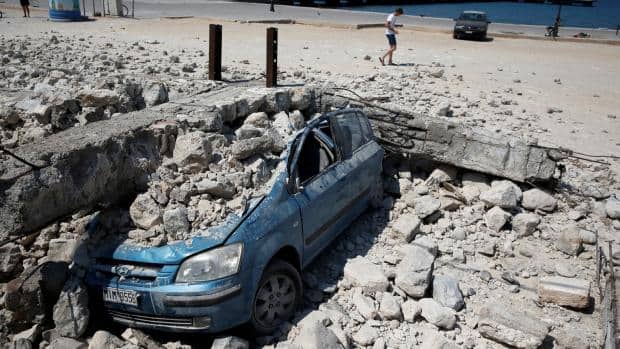 Damage spreads across Greece and Turkey after earthquake

Ferry service was cancelled until daylight because Kos's main port was damaged, and at least one ferry en route to the port was unable to dock.

"The people of Bodrum are feeling lucky that the damage is not as bad as it could have been," Koksal said.

The quake was centred 10 kilometres south of Bodrum, Turkey, and 16 kilometres east-northeast of Kos with a depth of 10 kilometres, according to the U.S. Geological Survey. At least nine aftershocks were recorded, centred in the nearby waters.

"The instant reaction was to get ourselves out of the room," said Christopher Hackland of Edinburgh, Scotland, who is a scuba instructor on Kos.

"There was banging. There was shaking. The light was swinging, banging on the ceiling, crockery falling out of the cupboards, and pans… It felt like being at a theme park with one of the illusions, an optical illusion where you feel like you're upside down."

Several Greek government ministers, as well as rescuers with sniffer dogs and structural engineers traveled to Kos overnight to co-ordinate the rescue effort. The British Foreign Office warned travellers of the possibility of aftershocks, urging them to follow the advice of the local authorities.

Turkish Health Minister Ahmet Demircan said 358 people were hurt in the quake. Authorities said earlier some 70 people were treated in hospitals in Bodrum for minor injuries, mostly sustained during panicked flight from their homes. But damage was light and they expect life will soon return to normal. With tourists continuing their holidays.

Esengul Civelek, governor of Turkey's Mugla province, said there were no casualties according to initial assessments. She said "there were minor injuries due to fear and panic."

In Bitez, a resort town about six kilometres west of Bodrum, the quake sent frightened residents running into the streets.

Hotel guests briefly returned to their rooms to pick up their belongings but chose to spend the rest of the night outside, with some using sheets and cushions borrowed from nearby lounge chairs to build makeshift beds, according to an Associated Press reporter on the scene.

Greece and Turkey lie in an especially earthquake-prone zone, and this was the region's second significant temblor since May. Experts say the area is due for a larger quake.