A powerful earthquake has struck near Kumamoto in southern Japan, barely 24 hours after a tremor collapsed houses and killed nine people. 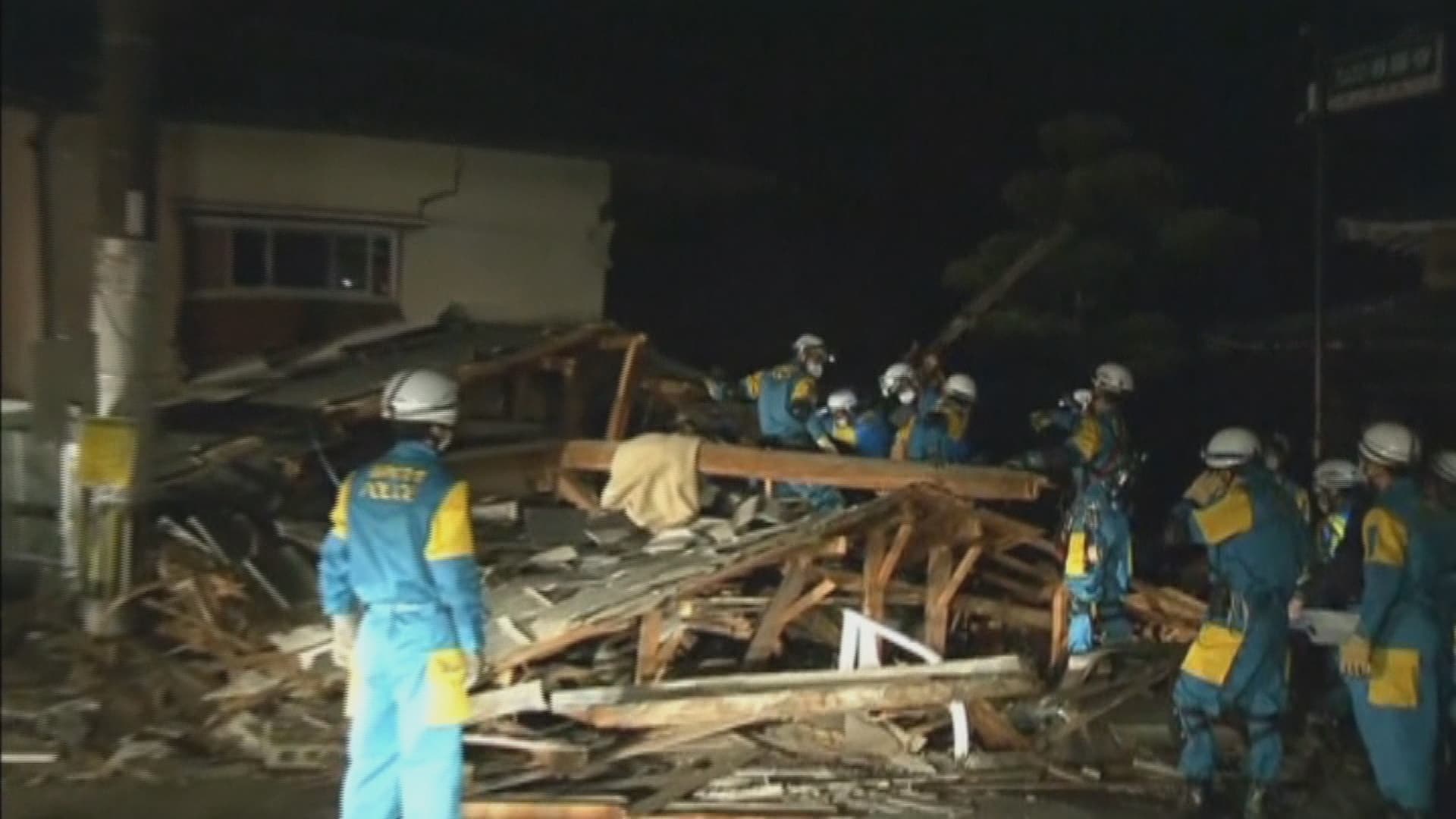 5 years ago
2:10
6 people are dead and 400 injured after a powerful earthquake struck near Kumamoto in southern Japan 2:10

At least six people are dead and 400 injured after a powerful earthquake struck near Kumamoto in southern Japan barely 24 hours after one collapsed houses and killed nine people.

Japanese Prime Minister Shinzo Abe says his government is making every effort to determine the extent of the damage, carry out rescue and recovery operations and to get accurate information to citizens.

"It's possible that there may be damage over a wide area," Abe told reporters at his office.

Japanese broadcaster NHK said a number of calls were coming in from residents reporting people trapped inside houses and buildings. Video showed a resident, apparently rescued from underneath a collapsed house, on a stretcher being taken to a hospital by ambulance.

The magnitude 7.0 quake shook the Kumamoto region at 1:25 a.m. Saturday, at a depth of 40 kilometres, said the U.S. Geological Survey (USGS). It was followed approximately 20 minutes later by a powerful aftershock recorded as above 5 magnitude.

NHK reported the entire area of Kumamoto city — with a population of roughly 730,000 — is out of water, and that Nishihara village is being evacuated for fears a nearby dam may break. NHK also says officials are considering moving patients from hospitals feared to be unstable after the quake. 5 years ago
1:04
Damage reported near Kumamoto in southern part of country 1:04

The Japan Meteorological Agency issued a tsunami advisory, which identifies the presence of a marine threat and asks people to leave coastal regions, for the Ariake and Yatsushiro seas. NHK said the advisory suggested a possible wave of one metre in height, but it was cancelled less than an hour later.

The USGS has issued a yellow alert for fatalities, meaning some casualties are possible, and a red alert for economic losses, meaning extensive and widespread damage is likely.

The U.S. National Tsunami Warning Center reports there is no tsunami threat to British Columbia, Alaska, Washington, Oregon and California.

No irregularities were reported at three nuclear power plants in the area, NHK reported.

Thursday's quake, which brought with it more than 100 aftershocks, felled buildings and also injured about 800 people. The epicentre of Saturday's earthquake was about 12 kilometres northwest of the one the day before.

Measurements for the earthquakes vary because different agencies use different calculations. Saturday's quake, which the USGS puts at 7.0 magnitude and the Japan Meteorological Agency estimates at 7.1, would be around 15 times stronger than Thursday's, according to CBC seismologist and meteorologist Johanna Wagstaffe.

A magnitude 9 quake in March 2011, to the north of Tokyo, touched off a massive tsunami and nuclear meltdowns at Fukushima. Nearly 20,000 people were killed in the tsunami.